Chirality and spin in organic molecules - theory and applications

In the late 19th century, Louis Pasteur discovered that biology shows a preference for molecules with a specific handedness. Ever since, researchers have been trying to understand the origin of life’s homochirality and its implications. For example, electron transport in organisms, an essential part of basic biological processes such as respiration and photosynthesis, is realized via insulating helical molecules. Recent studies further found that the transmission probability of electrons through such molecules is strongly spin-dependent, with the preferred spin direction set by the chirality. This direct connection between spin and chirality raises numerous fundamental questions. It thus opens a new arena of research at the interface between biology and quantum physics. In my talk, I will review the most important experimental findings and describe a theoretical model that explains the origin of spin-dependent transport:  The helical geometry induces robust spin filtering accompanied by, and intimately related to, strongly enhanced overall transmission through chiral molecules. In particular, I will focus on spin-selectivity in the chiral system in which charge transfer occurs via phonon-assisted hopping. Finally, I will present some ideas for integrating organic molecules into solid-state devices for various applications. 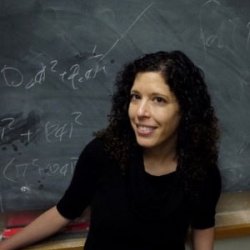 Karen Michaeli completed her Ph.D. in condensed matter physics at the Weizmann Institute of Science with Prof. Alexander Finkel’stein. She studied condensed matter theory as a Pappalardo postdoctoral fellow in the Department of Physics at the Massachusetts Institute of Technology until joining the Department of Condensed Matter Physics at Weizmann in 2013. Karen studies quantum transport in the presence of interactions and disorder. Recently, her research focuses on thermoelectric effects at low temperatures near the metal-insulator and metal-superconductor transitions, as well as spin-dependent transport in chiral organic structures.