Quantum resource theory formulations of thermodynamics offer a versatile tool for the study of fundamental limitations to the efficiency of physical processes, independently of the microscopic details governing their dynamics. Despite the ubiquitous presence of non-Markovian dynamics in open quantum systems at the nanoscale, rigorous proofs of their beneficial effects on the efficiency of quantum dynamical processes at the bio-molecular level have not been reported yet. Here we combine the resource theory of athermality with concepts developed to characterize non-Markovianity in quantum channels, to prove that memory effects can increase the efficiency of photoisomerization to levels that are not achievable under a purely thermal Markovian (i.e. memoryless) evolution. This provides rigorous evidence that memory effects can provide a resource in biological quantum dynamics, and, more generally, quantum thermodynamics at the nanoscale. 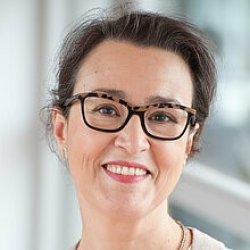 Professor Susana F. Huelga is Professor of Quantum Optics at the Institute of Theoretical Physics in Ulm University, Germany. She delivered seminal contributions to quantum estimation theory, quantum computing, metrology and sensing technologies, classical stochastic resonance and the burgeoning field of quantum biology. Her work has elucidated the ultimate limits on the speed of evolution of mixed quantum states, and associated precision limits for estimation in the presence of noise.