GSA is working to make theatre production more sustainable with the help of its first Green Captain, Evie Redfern. Evie and her tutor, Katy Downton, GSA’s Sustainability Champion, are pioneering the recommendations of the Theatre Green Book and aim to embed its practices into the industry. 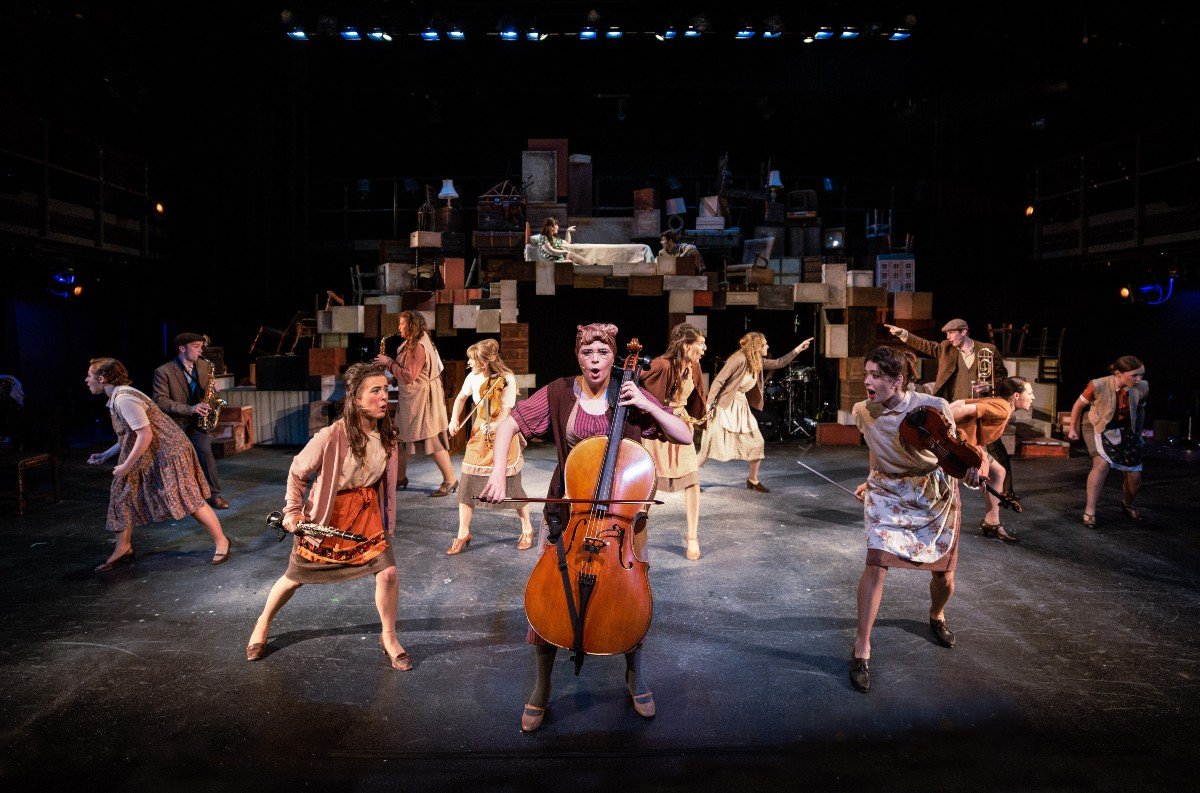 “The Spend set was built from the leftovers from other shows,” says Evie, Construction Manager for the show, now in her third year studying theatre production at GSA. “There were suitcases from Titanic and Red Velvet, set boxes from another play and treads made from part of a musical’s set. We had to work in a new way with the designer, Elliott Squire, but he was keen to listen and reduce waste.”

This dedication to reusing old materials – and also to ensuring as much as possible can be recycled after a show is over – is an approach being embedded into how GSA trains the next generation of theatre production technicians and just one of the many measurable elements in the sustainability assessments being applied to every show. GSA has given itself this academic year to achieve the baseline targets set in the Theatre Green Book: half of the set materials must be second hand, and 60% must be reused or recycled afterwards.

A handbook for students

Evie has written a handbook for GSA theatre production students containing ten targets for different aspects of production, including set construction, lighting, sound, wardrobe and stage management. Each one is being monitored and will help GSA achieve its target of meeting those Theatre Green Book baselines.

“Some of the targets sound small,” Evie says, “like cutting out non-reusable cable ties, but in a busy backstage environment, this is a considerable challenge which requires a change to everyday working practices.”

Students, industry professionals like Elliott and faculty members are using sustainability to stimulate rather than stifle creativity.

“We’re recruiting performance students to become Green Captains too,” Evie says. “They can challenge directors who aren’t thinking about sustainability.”

Students are pioneering new practices which they will take into professional theatres. For example, they developed a better way to clean paintbrushes which uses less water and results in less pollution entering watercourses.

As one of the country’s most respected conservatoires, GSA is taking the lead in pushing the sustainability agenda. Evie and Katy are encouraging other drama schools to work with them and share ideas, with Katy taking a leading role in the Theatre Green Book Education Panel and the Sustainability in Production Alliance, through which she shared ‘10 Easy Wins for Educators’ earlier this year.

“We want sustainability to be as embedded in theatre production as health and safety,” says Katy. “If our graduates working in the West End saw something dangerous, we’d want them to call it out. That’s where we want to get to with sustainability, and we’re training our students accordingly.”

Find out more about Guildford School of Acting, part of the University of Surrey.

See the 10 Easy Wins for Educators.