Problems of mobile blindspots in urban areas solved at Surrey

Signal in blindspots in built-up urban areas could soon be a thing of the past thanks to research at 5G/6GIC.

A team of academics and researchers, led by Dr Mohsen Khalily, have been developing a new technology called Reconfigurable Reflecting Surface (RRS).

The challenge of urban connectivity

“Having economically viable high quality broadband coverage is still a big challenge for all network operators,” says Mohsen. “This is especially true in dense urban environments where the presence of a large number of buildings and infrastructures give rise to harsh propagation conditions for electromagnetic waves.

“This leads to patchy connectivity for people. But what if we could control the electromagnetic waves to do what we want?"

And that’s where RRS technology comes in… 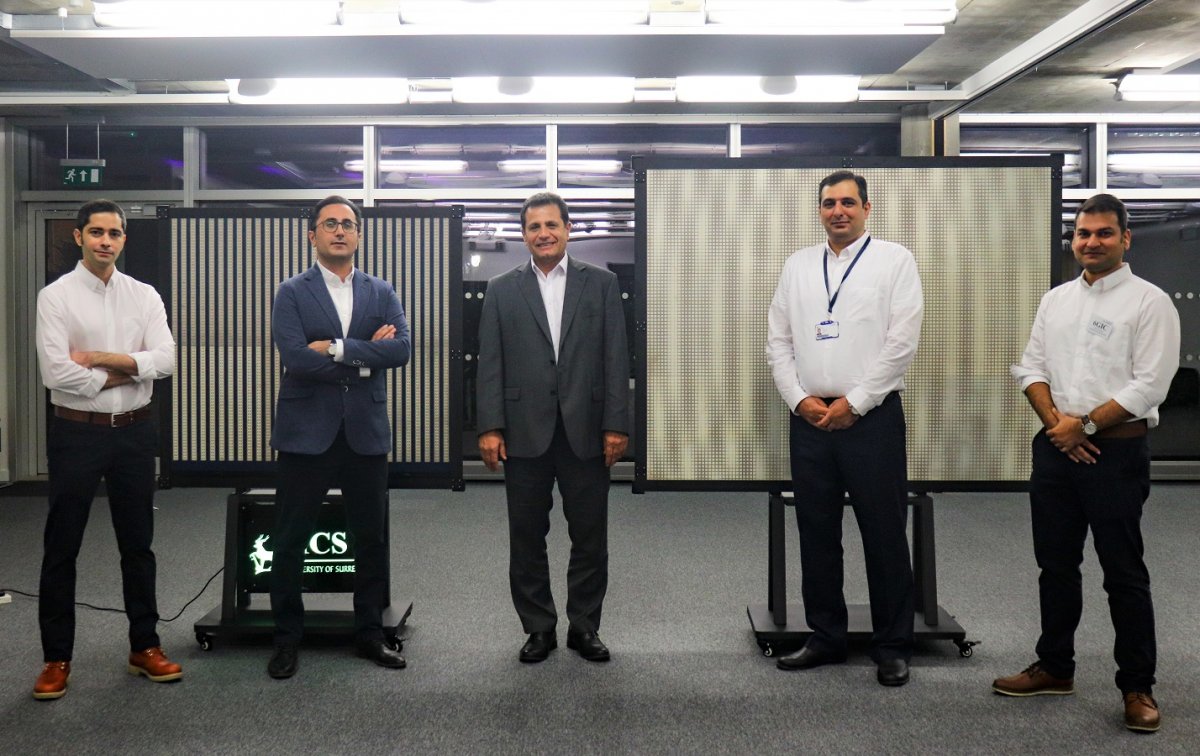 The research team with the Reconfigurable Reflecting Surface technology.

Blind spots that can see

Mohsen continues: “Our research into the use of RRS can enhance meaningful coverage by sensing the environment, recycling the existing electromagnetic waves and redirecting them towards the place of interest.”

Put simply, RRS can be installed on buildings in urban areas where coverage is poor or non-existent, and bounce the signal from a transmitter off several LIRS to a receiver to ensure uninterrupted coverage.

“To put up a new base station to cover small areas with no signal penetration is expensive,” adds PhD student Vikrant Singh. “But with this kind of intelligent surface, we can cover those blind spots, ensuring the user has seamless connectivity, even if they are moving.”

Mohsen and his team tested this technology in 2020 by streaming a video in one room at 5G/6GIC with the transmitter in another room. In the middle was a coverage blind spot.

By bouncing the signal off a precisely positioned static surface, the transmitter was able to cope with the blind spot and deliver a video stream. Once the RRS was repositioned to stop that interaction, however, the signal was lost.

This static RRS created by Mohsen and his team, however, was only the start. Since then, they’ve developed a dynamic and smart version, which can change the reflecting angle.

Mohsen explains: “Our improved RRS has a tracking mode to follow the user and calculate everything automatically. This ability for it to reconfigure itself means it can continuously move to reflect the signal, so it follows the user and the user always has seamless connectivity.

“This is a big achievement for the University. As far as we know, there’s nothing else like it in the world.”

Dr Mohsen and his team at 6GIC are currently developing a novel transparent transmission surface to be placed on windows to enhance indoor coverage by allowing signals to get through buildings.

Learn more about 5G/6GIC at the University of Surrey.