Surrey physicists identify a fundamental link between the size of atomic nuclei and blackhole thermodynamic principles.

Using an entirely new approach based on a ground-breaking geometrical understanding of entropy, a collaborative team involving the University of Surrey have found a new way to calculate the sizes of the nuclei in the helium isotopes 4He, 6He, 8He, assuming only the radius of the proton. 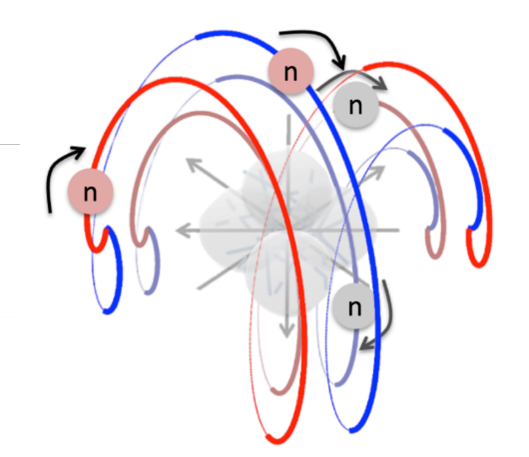 The technique, explained in a peer-reviewed paper published in Annalen der Physik, works for both the matter and the charge radii.

In contrast, the microscopic models conventionally used by nuclear physicists are complex and fail to identify which results follow inherently from fundamental principles. The area is topical because experiments over the last few decades to measure nuclear sizes, often using major particle accelerators internationally, have built up an ever more detailed body of data.

The Surrey team used Quantitative Geometrical Thermodynamics (QGT), a deeply mathematical approach based on fundamental variational calculus considerations, which has previously been applied successfully to explain the stability of spiral galaxies and the role of their central supermassive black holes, of DNA and of Buckminsterfullerene (the C60 molecule). By using the same black hole physics of QGT to explore the nuclear regime as well, they have now demonstrated its validity over 35 orders of magnitude of length, a wider range than for any other physical theory.

The research focused on the helium isotopes, but similar treatment is also successful for the wider “Helium series” of atomic nuclei 12C, 16O, 20Ne, 24Mg, 28Si, 32S, 36Ar, 40Ca. The team anticipates that the same approach will lead to valuable insights for other nuclei, both stable and unstable. This is expected to enhance the study and understanding of nuclear structure physics.

“In clearing up a fundamental scientific mystery, our findings will lead to critical progress in bringing together quantum mechanics and general relativity. The benefits are immeasurable and relevant in many fields, from knowledge of the universe and understanding of fundamental principles to the development of new drugs and better energy storage.”

“The findings almost seem too good to be true, but we worked hard to identify the conceptual links and consistency with microscopic quantum mechanics and reached an improved understanding. The foundations of our approach lie in the links between entropy, information and symmetry, which are fundamental and apply at all scales, sub-atomic or cosmic.”