The University of Surrey’s leading sound artist, Professor Tony Myatt, has produced a new, state-of-the-art sound and light installation featuring recordings of the elusive blue whale to draw attention to the significance of sound for ocean inhabitants, and the devastating impact sound pollution can have on marine life. 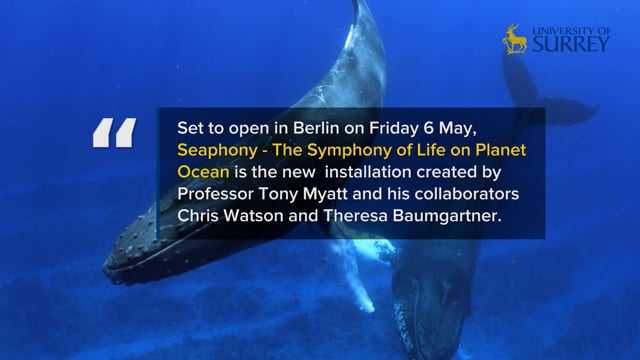 Set to open in Berlin on Friday 6 May, Seaphony - The Symphony of Life on Planet Ocean is the new spatial sound and light art installation by the University of Surrey's Head of Music and Media, Professor Tony Myatt, and his collaborators Chris Watson and Theresa Baumgartner.

The installation will allow visitors to experience the grandness of the ocean through unique and extraordinary spatial soundscapes and light, at the Alte Münze in Berlin Mitte.

Professor Tony Myatt, Head of the Department of Music and Media at the University of Surrey, said:

"When we are discussing climate change, pollution, and our planet's health, it is easy to forget that we share Earth with majestic and beautiful creatures such as the blue whale. It's our hope that this project, which combines Surrey’s creative excellence with our pan-University commitment to sustainability, reminds us of the duty we have to nurse this planet to health, not only for future human generations, but for animals that share this space with us."

The work was commissioned to support the launch of the United Nation’s Decade of Ocean Science for Sustainable Development 2021-2030 and uses three-dimensional sound technologies to immerse listeners in some of the world’s most fascinating underwater sound habitats. Some of the sounds for Seaphony were captured in the Sea of Cortez, Baja, California by sound artists and field recordists Professor Myatt and Chris Watson. On location, they discovered the songs of the largest animal that has ever lived - the blue whale. Their adventure in California is the subject of a three-part podcast from The Guardian, entitled Deep Blue Notes.

“Seaphony takes the listener on a circumpolar underwater journey of the imagination. The songs and signals of crustaceans, fish and sea mammals carry the audience under the sea ice and through ocean currents from the Antarctic to the Arctic, in a deep connection with the largest and most sound-rich environments of our oceans.”

The UN's Decade of Ocean Science for Sustainable Development (2021-2030) is a global campaign to connect people with the world’s oceans and support efforts to reverse the cycle of decline in ocean health. The UN hopes to gather stakeholders worldwide behind a common cause and framework that will ensure ocean science can fully support countries in creating improved conditions for sustainable development of the ocean. The marine realm is the largest component of the Earth's system that stabilizes climate and supports life on Earth and human wellbeing.

The University of Surrey is a leading research institution that focuses on sustainability to the benefit of society in order to deal with the many challenges of climate change. It is also committed to improving its own resource efficiency on its estate and being a sector leader. It has set a commitment to be carbon neutral by 2030. In April, it was ranked 55th in the world by the Times Higher Education (THE) University Impact Rankings which assesses more than 1,400 universities' performance against the United Nations’ Sustainable Development Goals (SDGs).

Professor of Music and Sound Recording