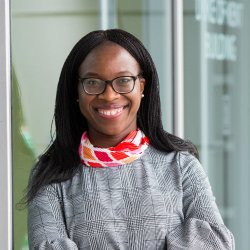 Chinyere graduated with a degree in industrial microbiology in Nigeria, followed by an MSc in industrial and commercial biotechnology from Newcastle University, UK in 2007, where her research project focussed on using a range of genotypic and phenotypic approaches to characterise novel actinomycetes whilst highlighting potential bioactivity in recovered isolates.

In 2012, she obtained a PhD in molecular biology from Corpus Christi College, University of Cambridge, enabled by a four-year Wellcome Trust PhD studentship and was based at the Wellcome Trust Sanger Institute, Cambridge, UK. During her PhD research, she used a combination of genomic and phenotyping methods to investigate the genotype to phenotype links in human-invasive variants of Salmonella Typhimurium.

She was awarded a Society-in Science, Branco Weiss Fellowship in 2013. Chinyere extended her previous research and developed her current research firstly, as a postdoctoral fellow at the Wellcome Trust Sanger Institute (2012-2014) and then as a Research Associate at the Department of Medicine, University of Cambridge (2015-2017).

Chinyere joined the University of Surrey in February 2017.

Our lab research broadly aims to use best-fit methods to study the epidemiology of and identify variation in important enteric pathogen populations in order understand the contributory role of the identified variation in disease transmission.

Currently we are investigating the prevalence and transmission dynamics of clinically-important drug resistant enteric bacteria, including Klebsiella, E. coli, & non-typhoidal Salmonella serovars, in a community setting in Western Nigeria. We use genome-based analyses and various phenotyping assays to study variation, such as antimicrobial resistance, within and between identified bacterial pathogen populations.