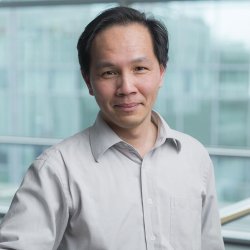 Chuan Heng Foh received his M.Sc. degree from Monash University, Australia in 1999 and Ph.D. degree from the University of Melbourne, Australia in 2002. After his PhD, he spent 6 months as a Lecturer at Monash University in Australia. In December 2002, he joined Nanyang Technological University, Singapore as an Assistant Professor until 2012. He is now a Senior Lecturer at the University of Surrey. His research interests include protocol design and performance analysis of various computer networks including wireless local area and mesh networks, mobile ad hoc and sensor networks, 5G networks, and data center networks.

He has authored or co-authored over 100 refereed papers in international journals and conferences. He actively participates in IEEE conference and workshop organization, including the International Workshop on Cloud Computing Systems, Networks, and Applications (CCSNA) where he is a steering member. He is an Associate Editor for IEEE Access, IEEE Wireless Communications, International Journal of Communications Systems, and a Guest Editor for various International Journals. Currently, he is the Vice-Chair (Europe/Africa) of IEEE Technical Committee on Green Communications and Computing (TCGCC) and the Chair of Special Interest Group on Green Data Center and Cloud Computing under TCGCC. He is a senior member of IEEE.