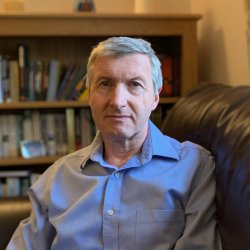 David is a member of the Soft Matter group of the Physics Department where he works as a theorist and computational modeller studying nano-porous materials of environmental interest.  Simulation techniques include molecular dynamics and Monte Carlo.  His theoretical work has been instrumental for the interpretation of fast-field-cycling NMR data on porous material such as oil-bearing rock, cement-based material, clays and plaster.

David is a theoretical/computational condensed matter physicist with current research interests focusing on molecular dynamics, Monte Carlo and Lattice-Boltzmann techniques. Current work focuses on the behaviour of fluids (especially water) in porous media. This includes the nanoscale exploration of hydrated cement-based materials with the aim of improving the longevity and lowering the carbon footprint of cement-based materials.  Recent work explores the modelling of the swelling of woods.

David is also engaged in the molecular dynamics simulation of graphene in collaboration with the King Abdulaziz University in Jeddah. The aim is to establish the extent to which the Raman spectra changes when the graphene is placed in different conditions of size, strain and defect density.

David's previous research interests focused chiefly on the modelling of stress/strain and piezoelectric fields in semiconductor quantum wires and dots. Numerical procedures, Green's functions, Fourier methods and atomistic simulations were used to determine the stress/strain fields which are of paramount importance in the determination of novel semiconductor device properties.

Recent research collaborations have involved the consortium of universities and commercial organisations in the UK and Europe interested in the behaviour of cement materials.  David is Surrey CI in a new EU Marie Curie grant award with collaborators at Alma Mater Studiorum - Universita di Bologna, Technische Universitaet Wien, Heidelbergcement AG and EPFL in Switzerland.  Collaboration with the National Forestry commission for wood studies continues.  David also collaborates with the King Abdulaziz University in Jeddah, Saudi Arabia, on a graphene project.