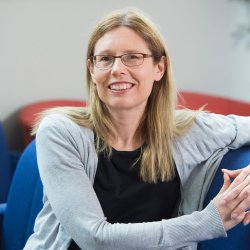 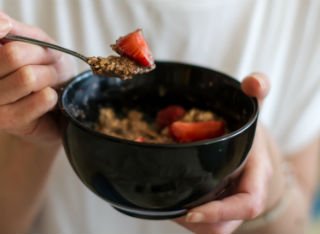 Changes in breakfast and dinner timings can reduce body fat

In this thesis, the effect of Galactooligosaccharide (GOS), a prebiotic, on the composition of the gut microbiota was investigated. Next generation sequencing (NGS) of the gut microbiota of T2D and healthy control subjects showed no significant difference at the phylum level between the two groups. Furthermore, T2D patients in the prebiotic group had a significant increase in the level of Firmicutes compared to the placebo group. Also, although not significant, T2D patients on metformin had increased level of Bacteroidetes, Proteobacteria and Actinobacteria compared to those not on metformin. The ability of human faecal water (FW) to distinguish between healthy and T2D patients using an in vitro model of the intestinal mucosa was studied. FW from T2D patients decreased Caco-2 cell monolayer integrity when compared to the healthy controls and in the T2D patients, FW activity in vitro correlated with biological markers of T2D severity measured in vivo. Additionally, cytokines were measured in T2D faecal samples using a human cytokine array. Finally, GOS anti-cytotoxic activity was also assessed in vitro using cell viability assays and the anti-cytotoxic effect of GOS was time and concentration dependent.

Together, the thesis explored potential new ways of using faecal samples as biomarker for T2D in vitro and relating it to in vivo parameters of the patients. Also future work in this area may reveal mechanistic insight to the use of FW as a non-invasive biomarker for T2D.

Serum lipids and lipoproteins are established biomarkers of cardiovascular
disease risk that could be influenced by impaired gut barrier function via effects on the absorption of
dietary and biliary cholesterol. The aim of this study was to examine the potential relationship
between gut barrier function (gut permeability) and concentration of serum lipids and lipoproteins, in
an ancillary analysis of serum samples taken from a previous study.

Serum lipids, lipoproteins and functional gut permeability, as assessed by the
percentage of the urinary recovery of 51-Cr-labelled EDTA absorbed within 24h, were measured in a
group of 30 healthy men. Serum lipopolysaccharide, high sensitivity C-reactive protein and
interleukin-6 were also measured as markers of low-grade inflammation. The group expressed a 5-
fold variation in total gut permeability (1.11 - 5.03%). Gut permeability was unrelated to the
concentration of both serum total and low density lipoprotein (LDL)-cholesterol, but was positively
associated with serum high density lipoprotein (HDL)-cholesterol (r=0.434, P=0.015). Serum HDL
cholesterol was also positively associated with serum endotoxaemia (r=0.415, p=0.023).

The significant association between increased gut permeability and elevated serum
HDL-cholesterol is consistent with the role of HDL as an acute phase reactant, and in this situation,
potentially dysfunctional lipoprotein. This finding may have negative implications for the putative
role of HDL as a cardio-protective lipoprotein.

Shamlan G. (2016) Examining the acute effects of exercise intensity on subsequent appetite, food intake, resting energy expenditure and fat oxidation.,
Energy balance is important for weight maintenance with exercise having documented physiological, behavioural, and appetite effects. Exercise is known to acutely influence appetite but evidence for an independent effect of intensity is lacking. The purpose of this dissertation was to investigate the role of exercise intensity on appetite and energy intake (EI), energy expenditure (EE), and the metabolic effects of exercise intensity per se in lean and overweight individuals and to determine whether there was influence of gender or differences between groups.
Forty healthy volunteers (30 lean and 10 overweight) undertook 2 periods of exercise matched for energy cost, (i) 8 repeated 60 second bouts of cycling at 95% VO2 max; high intensity exercise (HI) and (ii) 30 minutes of continuous cycling, at a fixed cadence, at 50% VO2 max; low intensity exercise (LI) in a randomised cross-over design. Satiety to a standard meal was assessed subjectively using visual analogue scales. Ad libitum intake was measured 3-h post-breakfast and for 2 days post-exercise. EE and fat oxidation were measured every 30 mins post-exercise. The results showed that in the lean group relative to LI, HI suppressed prospective food consumption, increased EE (P=0.001), fatty acid (NEFA) utilisation (P=0.004) and fat oxidation (P In the overweight individuals, HI did not differ from LI in terms of appetite, GLP-1, glucose, insulin, lipid or NEFA levels, with no difference in EI, EE and fat oxidation post-exercise. In conclusion, there are different consequences of exercise intensity in short-term control of energy balance depending on BMI and gender; our results support the need for longer term intervention to test these mechanisms.
Flourakis Matthieu, Ruijgrok Carolien, Blaak Ellen E., Egil Leonie, Dussort Pierre, Vinoy Sophie, Rauh Simone, Beulens Joline W., Robertson Denise, Alssema Marjan (2020) Reducing postprandial glucose in dietary intervention studies and the magnitude of the effect on diabetes-related risk factors: a systematic review and meta-analysis, European Journal of Nutrition Springer
Purpose: Reducing postprandial hyperglycemia has beneficial effects on diabetesrelated risk factors, but the magnitude of the reduction needed to achieve such an effect is unknown. To quantify the relationship of acute glucose and insulin postprandial responses with longer-term effects on diabetes-related risk factors by performing a systematic review and meta-analysis of dietary intervention studies. Methods: We systematically searched EMBASE and MEDLINE. Dietary intervention studies among any human population aiming to reduce postprandial glycaemia, with actual measures of postprandial glucose (PPG) and/or insulin (PPI) as acute exposures (incremental area under the curve, iAUC) as well as markers of glucose metabolism (fasting glucose, HbA1c) and insulin sensitivity (fasting insulin, HOMA-IR) after at least 4 weeks of diet intervention as outcomes, were included. Meta-analyses were performed for the effects on acute exposures and on diabetes-related risk factors. The relationship between changes in acute exposures and changes in risk factor outcomes was estimated by meta-regression analyses. Results: Out of the 13004 screened papers, 14 papers with 14 comparisons were included in the quantitative analysis. The dietary interventions acutely reduced mean PPG (mean difference (MD), -0.27 mmol/l; 95% CI, -0.41 to -0.14) but not mean PPI (MD, -7.47 pmol/l; 95% CI, -16.79 to 1.86). No significant overall effects on fasting glucose and insulin. HbA1c was reduced by -0.20% (95%CI -0.35 to -0.05). Changes in acute PPG were significantly associated with changes in fasting plasma glucose (FPG) (per 10% change in PPG: ² = 0.085 (95% CI, 0.003, 0.167), k=14), but not with fasting insulin (² = 1.20 (95% CI, -0.32, 2.71), k=12). Changes in acute PPI were not associated with changes in FPG (per 10% change in PPI: ² = -0.017 (95% CI, -0.056, 0.022), k=11). Conclusions: Only a limited number of postprandial glucose lowering dietary intervention studies measured acute postprandial exposures to PPG/PPI during the interventions. In this small heterogeneous set of studies, an association was found between the magnitude of the acute postprandial responses and the change in fasting glucose but no other outcomes. More studies are needed to quantify the relationship between acute postprandial changes and long-term effects on risk factors.
Alssema Marjan, Ruijgrok Carolien, Blaak Ellen E., Egli Léonie, Dussort Pierre, Vinoy Sophie, Dekker Jacqueline M., Robertson M. Denise (2020) Effects of Alpha-Glucosidase Inhibiting Drugs on Acute Postprandial Glucose and Insulin Responses: a Systematic Review and Meta-Analysis, Nutrition and Diabetes Springer Nature

Background/Objectives: Despite considerable literature supporting the potential health benefits of reducing postprandial glucose (PPG), and insulin (PPI) exposures, the size of a
clinically relevant reduction is currently unknown. We performed a systematic review and
meta-analysis to quantify effects of alpha-glucosidase inhibiting (AGI) drugs on acute
postprandial glucose and insulin responses.

Methods: We searched EMBASE and MEDLINE until March 13, 2018 for controlled studies
using AGI drugs together with a standardized carbohydrate load or mixed meal. The mean
incremental postprandial glucose and insulin levels were calculated as outcomes. Metaanalyses, stratified by diabetes state, were performed by using random effects models.

Results: The 66 included publications comprised 127 drug-control comparisons for PPG, and
106 for PPI, mostly testing acarbose or miglitol. The absolute effects on PPG were larger
among individuals with diabetes (-1.5 mmol/l mean PPG [95%CI -1.9, -1.1] by acarbose, and
-1.6 [-1.9, -1.4] by miglitol) as compared to individuals without diabetes (-0.4 [95%CI -0.5, -
0.3] by acarbose, and -0.6 [-0.8, -0.4] by miglitol). Relative reductions in PPG by both drugs
were similar for diabetic and non-diabetic individuals (43-54%). Acarbose and miglitol also
significantly reduced mean PPI, with absolute and relative reductions being largest among
individuals without diabetes.

Conclusions: The present meta-analyses provide quantitative estimates of reductions of PPG
and PPI responses by alpha-glucosidase inhibiting drugs in diabetes and non-diabetic
individuals. These data can serve as benchmarks for clinically relevant reductions in PPG and
PPI via drug or diet and lifestyle interventions.