Department of Politics, Centre for Britain and Europe.

I joined the University of Surrey on August 2020 as a postdoctoral research fellow in the Department of Politics on the Horizon 2020 project PROTECT- The Right to International Protection: A Pendulum between Globalization and Nativization? This is an EC funded collaborative research project which is conducted by a consortium of 11 partner universities in Europe, Canada, and South Africa. As a postdoctoral researcher I am involved in Work Package 4 which investigates vulnerability and the lived experiences of refugees who are immobilised in the Greek refugee camps, notably on Lesvos Island and Thessaloniki in North Greece.

I have studied Sociology (BA) and Social Anthropology (MA) in Greece with a focus on gender. I completed my PhD in Social Policy and Criminology at the Open University (UK) on the 2015 refugee crisis and border violence. My research is an interdisciplinary self-reflexive ethnographic study which focuses on the historical development of the so-called refugee crisis and the continuum of the politics of closed borders and violence in time and space. It explores the human consequences of the EU border regime upon refugees’ lives.

My main fieldwork site is the Greek Island of Lesvos where I investigated refugees’ lived experiences of social suffering, border harms and violence. I have worked for more than a decade in detention centres and refugee camps on Lesvos and the Greek mainland as an NGO practitioner. I have an extensive professional experience with survivors of torture, sexual violence, and human trafficking. 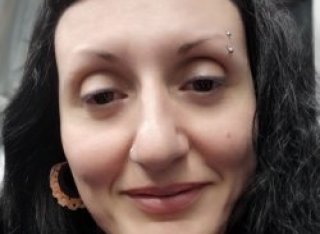 Working with people seeking safety in Lesvos is becoming more and more difficult. As well as issues in infrastructure and the restrictions placed on crossing in the EU-Turkey deal, migrant solidarity activists are increasingly targeted by right wing groups, as well as by authorities that seek to criminalise some aspects of migrant support. In this interview, Victoria Canning speaks to Evgenia Iliadou about her work with migrant solidarity groups in Lesvos, the importance of dignity in death, as well as Evgenia’s research into border harms across this region.

My research is very interdisciplinary and combines the scientific fields of critical migration and border studies, social anthropology and critical criminology.

My research interests focus broadly on forced displacement, refugee crisis, temporality of migration, the continuum of (border) violence in time and space and refugees’ lived experiences of violence. In particular I am interested in the following:


Iliadou, E., (2018). The externalisation and internalisation of the EU borders: the case study of Lesvos Island.
View abstract View full publication
In the aftermath of the so-called "refugee crisis" and the implementation of the EU-Turkey Statement, refugees have indefinitely been trapped on Lesvos Island. Lesvos has been transformed into a "prison island" where racism, violence and xenophobia are gradually escalating. At the same time, acts of everyday solidarity and resistance take place on Lesbos, as an antidote to racism, fear and violence.
Iliadou, E. (2021). Places in Nowhere: Detention Centres, Police Departments and Pre-Removal Centres in Greece
View abstract View full publication
In the aftermath of the 2015 “refugee crisis”, Greece attracted much attention due to the escalation of border violence and the infliction of harm against forcibly displaced people. Despite the new and increased attention on and documentation of border violence at sea and open refugee camps there is a relatively limited focus on the continuum of the implicit and routinised forms of violence against migrants inside police stations, pre-removal centres, and other detention facilities across Greece. Drawing on my first-hand, lived experiences as a female NGO practitioner, activist, and researcher for many years in border zones in Greece, in this self-reflexive blog I write about the  in sites of confinement. I argue that detention centres, police stations, and pre-removal centres are frequently inaccessible, isolated spaces and hidden from public view. In this respect most of them are . I will provide insights from the various sites of confinement I accessed in Greece as well as of the various forms of violence against refugees that I witnessed, but also experienced myself as a female practitioner in these sites across time. I argue that these places are harmful sites where violence is endemic and wherein even practitioners, like me who were supported by NGOs, can become vulnerable to state violence.
violence continuumplaces in nowhere
Iliadou, E., (2021). ‘Less than Human’: Dehumanisation of refugees in refugee camps and host communities
View full publication
Iliadou, E., Exadaktylos, T., (2021). The state of international protection on Lesvos five years after the EU-Turkey Deal
View abstract View full publication
Turkey has been  for systematically violating human rights, having a dysfunctional asylum system, using violence and degrading living conditions, and coercively expelling forcibly displaced people from Turkey back to war zones. This raises serious doubts about the legitimate inclusion of Turkey as a ‘safe country’. Despite being a signatory to the 1951 Refugee Convention, Turkey  to the Convention only to people originating from Europe. This  for determining whether a particular state is a safe third country. There is considerable evidence, four years since the EU-Turkey Statement, that neither Greece nor Turkey can be classed as safe havens for forcibly displaced people
criticisedmaintains the geographical limitationrestricted application of the Convention contradicts the Procedures Directive