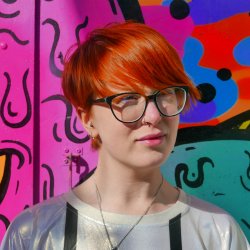 Gemma Connell is the Artistic Director of The Artifact, a post-hip-hop company which creates dance in conversation with other art forms, based in South Wales. Gemma was part of the first cohort of the Jerwood Creative Bursaries, with her placement as Trainee Producer (MIF Creative) at Manchester International Festival taking place from 2010-2011. Since then, she has worked with Rosie Kay Dance Company, Youth Theatre Arts Scotland and Fun Palaces as a freelance dance artist, and on a variety of Olympic projects, including as a Stage Manager for Piccadilly Circus Circus, as part of the Mayor of London’s Surprises in 2012. From 2012-2014, she held the position of Youth and Education Coordinator at Pavilion Dance South West. Gemma’s most recent venture comes in the form of a doctorate, as a PhD Candidate at The University of Surrey, in receipt of the Doctoral College Studentship Award, and researching semi-autobiographical representations of gender violence in Hip Hop dance theatre.

Connell, G., Newland, I. and Gazzunti, P. (2018). In and Out of Flow! Improvisatory decision making in dance and spoken word (Choreographic Practices Journal)
View abstract
is an open stage performance event that sees dancers in close conversation with spoken word artists. From its roots in the USA, slam poetry has become a cultural phenomenon, touching the hearts and minds of those involved in the hip hop genre, as well as that of modern literature. Over the years, the lines between this form of performance and other arts have begun to blur. takes this a step further, allowing the spoken word to entwine itself with the human body. This event sees a succession of duets and group performances, teaming up poets with dancers to showcase their art forms collaboratively. Each pair locks, pops, spits and rhymes their way through a spontaneous set. Using the experience of previous artists and workshop participants, and examples of other projects and research into improvisatory practices and dance/spoken word collaboration across the UK, we look at elements of divided attention for the artists and the audience. We expand this to include the time lapse that can occur when one art form responds to another in order to inform a discussion around a dancer's improvisatory decision making process. To do this, we analyse the concepts used in as three separate voices, offering differing perspectives on how the dancer's mind responds to new spoken word stimuli.
Flow! Flow!Flow! Flow!
Connell, G. (2017). Old Stories for New Generations: In Conversation with Ishita Mili (Pulse Magazine)
View abstract
A look into US choreographer Ishita Mili's Urban Indian dance form.