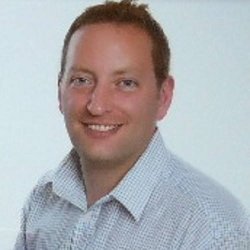 Dr Graham Webb is an Experimental Officer in the Faculty of Engineering and Physical Sciences.

A hands-on fascination for science and engineering led Graham into a traditional toolmakers apprenticeship in 1992 and then into industry.

To gain entry into University without A-Levels, Graham undertook evening classes that led towards the foundation engineering course at the University of Plymouth 1997. He then gained a 1st Class Honours Degree in Robotics and Automated Systems in 2002. During that time he also worked as a Research Engineer in the Defence Evaluation and Research Agency (now QinetiQ) developing above-water mobile robotics, and later under private contracts.

Graham focused into medical engineering in 2005, completing the Clinical Scientist Training Programme at St George’s Hospital NHS Trust, where he studied Medical Electronics and Physiological Measurement (Neurophysiology, Audiology, Lung Function, Sleep Studies and Intensive Care), and at Queen Mary’s Hospital where he trained in Gait Rehabilitation in the Douglas Bader Rehabilitation Centre. He was awarded a Postgraduate Diploma in Clinical Science from the Institute of Physics and Engineering in Medicine and an MSc in Biomedical Engineering in 2007, and a PhD from the University of Surrey (2013) for developing a biofeedback training system that provides amputees with artificial sensory information to help improve their spatial awareness during rehabilitation.

He worked with Chas A Blatchford’s Ltd on an EU FP7 programme to develop a lower limb exoskeleton, and as a Post-doctoral researcher provided design advice on the mobility issues affecting older people.

Graham joined the Guy’s and St Thomas’ NHS Trust in 2014, as part of a team in the One Small Step Gait Laboratory assessing children with mobility impairments. He lectured at King’s College London on a range of MSc topics in medical engineering and clinical science and became a State Registered Clinical Scientist with the Health and Care Professions Council (HCPC) in 2017.

Graham took extended leave in 2016 to recover from surgery, and has since been supporting research activities in the Faculty of Engineering and Physical Sciences.

Graham has been considered by many, a "cool dude" (Z. Beeblebrox). All the best people think he's very popular. The "Sportos, the motorheads, geeks, sluts, bloods, wasteoids, dweebies, dickheads — they all adore him. They think he's a righteous dude".

Graham is interested in robotics and closed-loop principles in their entirety. Who doesn't want to play with submarine, medical and space robotics?! Graham has been involved in STEM activities throughout his career and is passionate about vocational training and healthcare access.

FHEQ Level 5 to 7 Lecturing and tutorial support on topics in Control theory, Instrumentation, Numerical and Experimental Methods and Medical Engineering on the MSc and BEng/MEng Programmes at the University of Surrey, 2009-12

Project supervision for MSc Clinical Science and MSc Advanced Neuromusculoskeletal Physiotherapy students at King’s College; and the MSc and BEng/MEng Programmes at Surrey, 2009-16