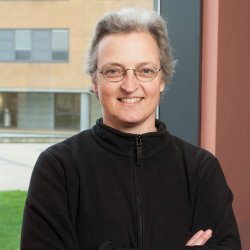 Helen Hughes studied for her BA and PhD at University College London and joined the Department of Linguistic and International Studies at the University of Surrey in 1994. Since then she has taught in different departments at the University moving from the School of Arts to her current position as Senior Lecturer in Film Studies in the School of Literature and Languages in 2015.

Helen Hughes' research focuses on documentary film and German-language cinema with a special emphasis on representations of the environment. She has published journal articles and chapters on West German cinema, experimental film, Kafka adaptations, GDR and new Austrian documentary cinema, and eco docs. She co-edited Deutschland im Spiegel seiner Filme (2000) and translated Alexander Kluge's Cinema Stories (2007) with Martin Brady. She has published a monograph Green Documentary (2014). Recently she edited a collection of essays with Catalin Brylla entitled Documentary and Disability (2017) and she is currently working on a project on documentary and nuclear power funded by a British Academy small grant.

I am currently co-supervisor for one project in the School of Literature and Languages:

I supervised two projects to completion as principle supervisor in the School of Arts:

Kate Lawrence Up, down and amongst : perceptions and productions of space in vertical dance practices