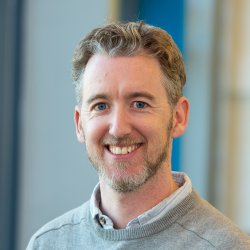 I returned to the University as Professor of Criminology and Research Methods in Summer 2017, having previously worked at the University of Warwick where I was Director of the Warwick Q-Step centre. I have always been a bit of a 'jobbing researcher' with wide ranging interests in the application of advanced quantitative methods across the Social Sciences. Currently my interests in Criminology include prison effects, the spatial patterning of crime and perceptions of crime, and the role of neighbourhood context. In methodology I am particularly interested in new developments in multilevel modelling, bayesian statistics, and survey methodology. I have also retained an interest in the public understanding of science, an area of work I got into before starting my PhD.

The main areas of research that I am currently involved in cover areas of Criminology and Survey Methods. In Criminology I have been particularly interested in prison effects, as well as the role of neighbourhood context in shaping residents' experiences. I am also increasingly interested in the spatial patterning of crime and disorder. In Survey Methodology my research has tended to focus on the role of interviewer effects.

This work explores the impact of prison experience on reoffending and employment amongst a cohort of nearly 4,000 prisoners using survey data from the Surveying Prisoner Crime Reduction (SPCR) survey linked to the Police National Computer. This includes the application of multilevel models to adjust for prison context, and longitudinal models to examine changes in prisoner experience and attitudes over time.

Brunton-Smith, I., and Hopkins, K. (2014) 'The impact of experience in prison on the employment status of prisoners after release: Findings from the first 3 waves of Surveying Prisoner Crime Reduction (SPCR)' Report for Ministry of Justice.

Hopkins, K., and Brunton-Smith, I. (2014) 'Prisoners' experience of prison and outcomes on release: Results from Surveying Prisoner Crime Reduction (SPCR)' Report for Ministry of Justice.

Brunton-Smith, I., and Hopkins, K. (2013) 'The factors associated with reconviction following release from prison: Findings from the first 3 waves of Surveying Prisoner Crime Reduction (SPCR)' Report for Ministry of Justice.

I am particularly interested in the potential impact that neighbourhood context has in shaping local residents perceptions. This has involved the application of multilevel models to crime survey data in order to identify the contribution of neighbourhood context, and combining this with contextual information from the census of England and Wales.

Brunton-Smith, I., Sturgis, P., and Leckie, G. (2018) ‘How collective is collective efficacy? The importance of consensus in judgments about community cohesion and willingness to intervene’. Criminology

Brunton-Smith, I., Sutherland, A., and Jackson, J. (2014) 'Bridging structure and perception; On the social ecology of beliefs and worries about neighbourhood violence in London'. British Journal of Criminology. 54 (4): 503-526.

My research within the field of survey methodology focuses specifically on the potential contribution that interviewers make to estimates of measurement error in face to face surveys. This is examined with the application of cross-classified multilevel models with a complex error structure to face to face survey data. I have also been involved in work looking at the potential for interviewer observation data collected during the interview to adjust survey estimates for nonresponse bias, as well as the potential for panel conditioning effects in longitudinal surveys. More recently I have been applying multiple imputation models to survey data with high attrition, including data with a multilevel structure.

Re-counting crime: New methods to improve the accuracy of estimates of crime

Evaluation of the Green Deal and ECO programmes: Examining potential bias in the cluster sampling methodology

Spatial modelling of crime and perceptions of crime

I currently supervise the following students:

Daniel Ennis (with Mathematics, from October 2018)

I am currently Director of Postgraduate Taught Degrees and Programme Leader for the MSc Social Research Methods. In October 2018 we changed the delivery of our advanced research methods modules, moving from semester-long to an intensive short course structure. This has allowed us to introduce a number of new modules (including Agent Based Modelling, Social Network Analysis, Advanced Qualitative Data Analysis, and Multilevel Modelling) and is the perfect way for students to learn advanced topics. If you would like to find out more about the new MSc, please feel free to get in touch.

I recently produced some NCRM training videos on multilevel modelling that you may find useful if you are unfamiliar with the technique. Being filmed is WAY outside of my comfort zone, so the results are less natural than I had hoped!

A few years ago I developed an online resource (with Karen Bullock and Rob Meadows) to assist students learning quantitative methods for the first time. If you would like to play around with the resources, you can register for free here.

In this paper we make use of a global survey to explore levels of vaccine hesitancy across the world. We demonstrate the importance of trust in science for vaccine uptake with less vaccine hesitancy in countries where trust is high. We also highlight the central role of social consensus, with the positive link between trust and vaccine support only evident in countries where consensus is high.

You can read the full paper here, or take a look at this short blog.

This was the first detailed study to look at disparities in science knowledge between adults from different racial and ethnic backgrounds. We found that people from black and Hispanic backgrounds were less able to answer questions about scientific facts and processes compared to white Americans. The study, published in Science (!), looked at potential reasons behind the disparity, including differences in basic literacy skills, attitudes to science (some minority groups expressed less trust and confidence in science), demographic factors such as education, gender, where people live and religion. After adjusting for all of these factors, a persistent science literacy gap remains, which could be related to the difference in the quality of education experienced day to day and year over year by underserved groups. This suggests the quantity and quality of science education needs to be looked at and we may also need training and public awareness campaigns to help scientists, teachers and employers to be more sensitive to the subtle manifestations of bias.