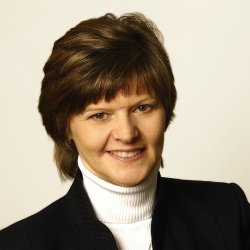 Janet Preston is Managing Director of Cold Fuzion, her own independent business consultancy – which she has put on hold to return to full time education to study for a PhD in Astrophysics.  Her current research is into the archaeology of dwarf galaxies and stellar streams in the Andromeda galaxy.  Her supervisors are Dr. Michelle Collins and Professor Justin Read.

Janet also has a broad portfolio of voluntary activities and is: a Trustee of the Winchester Science Centre and Planetarium; a Trustee of Satro – a charity that provides real-life experience of the working world, particularly in Science, Technology, Engineering and Maths (STEM), for young people; Chair of the Surrey Organising Committee for Teen Tech – an event aimed at inspiring 12 and 13 year olds to consider STEM careers; a member of Surrey County Council’s Employment and Skills Board; Education Ambassador for the Surrey Institute of Directors. Prior to becoming an independent consultant, Janet was a Partner at KPMG.

Preston Janet, Collins Michelle L M, Ibata Rodrigo A, Tollerud Erik J, Rich R Michael, Bonaca Ana, McConnachie Alan W, Mackey Dougal, Lewis Geraint F, Martin Nicolas F, Peñarrubia Jorge, Chapman Scott C, Delorme Maxime (2019) A Dwarf Disrupting - Andromeda XXVII and the North West Stream, Monthly Notices of the Royal Astronomical Society
DOI: 10.1093/mnras/stz2529
We present a kinematic and spectroscopic analysis of 38 red giant branch stars, in 7 fields, spanning the dwarf spheroidal galaxy Andromeda XXVII and the upper segment of the North West Stream. Both features are located in the outer halo of the Andromeda galaxy at a projected radius of 50-80 kpc, with the stream extending for +0.4?0.5`. We also re-derive Andromeda XXVII?s kinematic properties, measuring a systemic velocity = -526.1+10.0?11.0 kms?1 and a velocity dispersion that we find to be non-Gaussian but for which we derive a formal value of 27.0+2.2?3.9 kms?1. In the upper segment of the North West Stream we measure mean values for the metallicity = -1.8±0.4, systemic velocity = -519.4 ±4.0 kms?1 and velocity dispersion = 10.0±4.0 kms?1. We also detect a velocity gradient of 1.7±0.3 kms?1 kpc?1 on an infall trajectory towards M31. With a similar gradient, acting in the same direction, in the lower segment we suggest that the North West Stream is not a single structure. As the properties of the upper segment of the North West Stream and Andromeda XXVII are consistent within 90% confidence limits, it is likely that the two are related and plausible that Andromeda XXVII is the progenitor of this stream.
Collins Michelle L M, Tollerud Erik J, Rich R Michael, Ibata Rodrigo A, Martin Nicolas F, Chapman Scott C, Gilbert Karoline M, Preston Janet (2019) A detailed study of Andromeda XIX, an extreme local analogue of ultra diffuse galaxies, Monthly Notices of the Royal Astronomical Society stz3252 Oxford University Press (OUP)
DOI: 10.1093/mnras/stz3252
With a central surface brightness of ¼0 = 29.3 mag. per sq. arcsec, and half-light radius of rhalf=3.1+0.9?1.1kpc, Andromeda XIX (And XIX) is an extremely diffuse satellite of Andromeda. We present spectra for rÃ = ? 109.0 ± 1.6 kms?1 and a velocity dispersion of Ãvr=7.8+1.7?1.5Ãvr=7.8+1.7?1.5 kms?1(higher than derived in our previous work). We marginally detect a velocity gradient along the major axis of dvdÇ=?2.1±1.8 kms?1dvdÇ=?2.1±1.8 kms?1kpc?1. We find its mass-to-light ratio is higher than galaxies of comparable stellar mass (`[M/L]half=278+146?198M/L), but its dynamics place it in a halo with a similar total mass to these galaxies. This could suggest that And XIX is a ?puffed up? dwarf galaxy, whose properties have been altered by tidal processes, similar to its Milky Way counterpart, Antlia II. For the nearby stream, we measure vr = ?279.2 ± 3.7 kms?1, and Ãv=13.8+3.5?2.6 kms?1. We measure its metallicity, and find it to be more metal rich than And XIX, implying that the two features are unrelated. Finally, And XIX?s dynamical and structural properties imply it is a local analogue to ultra diffuse galaxies (UDGs). Its complex dynamics suggest that the masses of distant UDGs measured from velocity dispersions alone should be carefully interpreted.
Preston Janet (2020) Satellites and stellar streams of the Andromeda Galaxy,
DOI: 10.15126/thesis.00853746
One of the theories of galactic evolution is that large structures grow, hierarchically, from the merger and accretion of smaller ones. Evidence for this lies in the spectacular stellar streams observed around the Milky Way, Andromeda and other galaxies within and beyond the Local Group. In this thesis I study two stellar structures in the outer halo of Andromeda: the North West Stream (NW Stream) and an intriguing filamentary feature, the Eastern Extent located proximate the Giant Stellar Stream. The NW Stream comprises two separate segments thought to be parts of a single structure entwined around Andromeda. The upper segment of the NW Stream is co-located on-sky with the dwarf Spheroidal galaxy Andromeda XXVII. Using data from the Pan-Andromeda Astronomical Survey, I compare the kinematic and spectroscopic properties of these two features and find it plausible that Andromeda XXVII is being tidally disrupted by Andromeda and could be the progenitor of the upper segment of the NW Stream. Comparing velocity gradients and model orbits for both segments of the NW Stream, I find evidence that they are both infalling towards Andromeda indicating that it is unlikely that the NW Stream is a single structure. I also derive predictions for the proper motions for both stream seg- ments, which I find to be consistent with similar predictions for Andromeda and Andromeda XXVII. With respect to the Eastern Extent, I find it has kinematic and photometric properties consistent with other nearby features, i.e. Stream B and one of the substructures in Stream C, Stream Cr, plausibly linking these features. When I compare my results for the Eastern Extent to the properties of the Giant Stellar Stream I find that the Eastern Extent could plausibly comprise stars stripped from the progenitor of the Giant Stellar Stream. I conclude that further modelling is required to determine how the Giant Stellar Stream, the Eastern Extent and Streams B and Cr were formed.