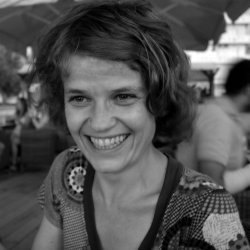 After graduating in Cognitive Neuroscience from Aix-Marseille Provence University, I obtained an MS in Neuroscience (2001) and a PhD in Developmental Neurobiology in 2005 from the University Claude Bernard in Lyon. For my postdoctoral work, I turned to my long-term passion which is to understand the function of sleep. In 2006, I took a post-doctoral position in the laboratory of Marcos Frank at the University of Pennsylvania (USA) where I started to explore the link between sleep and brain plasticity during development.  My research there focused on the role of mRNA translation as mechanism for brain plasticity consolidation during sleep. In 2010, I joined the group of Matthew Larkum at the Charité-Universtätsmedizin Berlin where I developed an in vivo calcium imaging technique to investigate the influence of sleep and sleep oscillations on activity in neuronal dendrites during natural sleep in rodents.  This led to the discovery that calcium activity in cortical dendrites is lijnked to spindles, a sleep oscillation that has been linked to cognitive function in humans and animals. Since 2016, I am a Lecturer in Sleep & Plasticity at the Surrey Sleep Research Centre (SSRC), Faculty of Health and Medical Sciences, University of Surrey, UK.

My current research focuses on investigating the link between the various aspects of sleep dynamics (e.g. sleep stages and oscillations) and mechanisms of synaptic plasticity. In particular, my work focuses on the influence of sleep and experience on molecular and cellular changes in synapses and dendrites in the cortex. 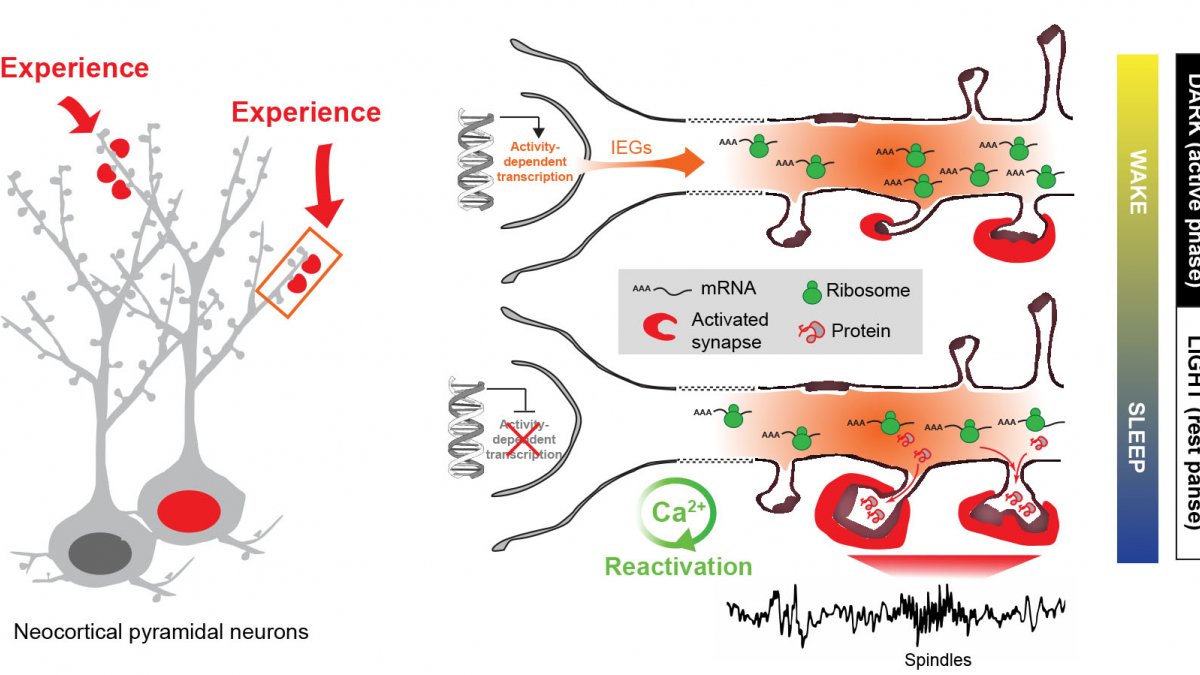 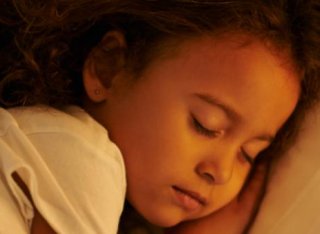 How sleep helps the brain to reorganise itself

We have an open position for a motivated postdoctoral fellow!

Every day our brain disconnects from the environment during sleep and interfering with this process has detrimental effects on our cognitive functions. What is so special about the sleeping brain that helps us learn and remember?

During sleep our brain is far from resting and enters a highly organised pattern of global changes in activity, cycling through periods of large scale network synchronization (i.e. NREM sleep) and desynchronized activity (i.e. REM sleep). Both sleep stages are important for maintaining proper cognition but the underlying physiology is not well understood.

My main research interest is to understand the link between sleep stages and synaptic plasticity - the fundamental mechanism that allows us to adapt and change communication between neurons in response to experience. We take a multidisciplinary experimental approach, including electrophysiology, molecular, in vivo optical imaging methods and behavioural manipulations in the rodent model.

Projects that we currently pursue include:

BMS3064: Neuroscience, from Molecules to Mind

Recent findings indicate that certain classes of hypnotics that target GABAA receptors impair sleep-dependent brain plasticity. However, the effects of hypnotics acting at monoamine receptors (e.g., the antidepressant trazodone) on this process are unknown. We therefore assessed the effects of commonly-prescribed medications for the treatment of insomnia (trazodone and the non-benzodiazepine GABAA receptor agonists zaleplon and eszopiclone) in a canonical model of sleep-dependent, in vivo synaptic plasticity in the primary visual cortex (V1) known as ocular dominance plasticity.

After a 6-h baseline period of sleep/wake polysomnographic recording, cats underwent 6 h of continuous waking combined with monocular deprivation (MD) to trigger synaptic remodeling. Cats subsequently received an i.p. injection of either vehicle, trazodone (10 mg/kg), zaleplon (10 mg/kg), or eszopiclone (1?10 mg/kg), and were allowed an 8-h period of post-MD sleep before ocular dominance plasticity was assessed. We found that while zaleplon and eszopiclone had profound effects on sleeping cortical electroencephalographic (EEG) activity, only trazodone (which did not alter EEG activity) significantly impaired sleep-dependent consolidation of ocular dominance plasticity. This was associated with deficits in both the normal depression of V1 neuronal responses to deprived-eye stimulation, and potentiation of responses to non-deprived eye stimulation, which accompany ocular dominance plasticity.

Taken together, our data suggest that the monoamine receptors targeted by trazodone play an important role in sleep-dependent consolidation of synaptic plasticity. They also demonstrate that changes in sleep architecture are not necessarily reliable predictors of how hypnotics affect sleep-dependent neural functions.

Polysomnographic recordings were performed during the entire experiment (20 h). After a baseline sleep/wake recording (6 h), cats received 6 h of monocular deprivation (MD) followed by an i.p. injection of triazolam (1-10 mg/kg i.p.), zolpidem (10 mg/kg i.p.), ramelteon (0.1-1 mg/kg i.p.), or vehicle (DMSO i.p.). They were then allowed to sleep ad lib for 8 h, after which they were prepared for optical imaging of intrinsic cortical signals and single-unit electrophysiology. Setting: Basic neurophysiology laboratory

Our findings demonstrate that alterations in sleep architecture do not necessarily lead to impairments in sleep function. Conversely, hypnotics that produce more ?physiological? sleep based on polysomnography may impair critical brain processes, depending on their pharmacology.

Sigl-Glöckner Johanna, Seibt Julie (2018) Peeking into the sleeping brain: Using in vivo imaging in rodents to understand the relationship between sleep and cognition,Journal of Neuroscience Methods Elsevier B.V.
DOI: 10.1016/j.jneumeth.2018.09.011
Sleep is well known to benefit cognitive function. In particular, sleep has been shown to enhance learning and memory in both humans and animals. While the underlying mechanisms are not fully understood, it has been suggested that brain activity during sleep modulates neuronal communication through synaptic plasticity. These insights were mostly gained using electrophysiology to monitor ongoing large scale and single cell activity. While these efforts were instrumental in the characterisation of important network and cellular activity during sleep, several aspects underlying cognition are beyond the reach of this technology. Neuronal circuit activity is dynamically regulated via the precise interaction of different neuronal and non-neuronal cell types and relies on subtle modifications of individual synapses. In contrast to established electrophysiological approaches, recent advances in imaging techniques, mainly applied in rodents, provide unprecedented access to these aspects of neuronal function in vivo. In this review, we describe various techniques currently available for in vivo brain imaging, from single synapse to large scale network activity. We discuss the advantages and limitations of these approaches in the context of sleep research and describe which particular aspects related to cognition lend themselves to this kind of investigation. Finally, we review the few studies that used in vivo imaging in rodents to investigate the sleeping brain and discuss how the results have already significantly contributed to a better understanding on the complex relation between sleep and plasticity across development and adulthood.
Seibt Julie, Frank Marcos G (2019) Primed to Sleep: The Dynamics of Synaptic Plasticity Across Brain States,Frontiers in Neuroscience Frontiers Media
DOI: 10.3389/fnsys.2019.00002
It is commonly accepted that brain plasticity occurs in wakefulness and sleep. However, how these different brain states work in concert to create long-lasting changes in brain circuitry is unclear. Considering that wakefulness and sleep are profoundly different brain states on multiple levels (e.g., cellular, molecular and network activation), it is unlikely that they operate exactly the same way. Rather it is probable that they engage different, but coordinated, mechanisms. In this article we discuss how plasticity may be divided across the sleep?wake cycle, and how synaptic changes in each brain state are linked. Our working model proposes that waking experience triggers short-lived synaptic events that are necessary for transient plastic changes and mark (i.e., ?prime?) circuits and synapses for further processing in sleep. During sleep, synaptic protein synthesis at primed synapses leads to structural changes necessary for long-term information storage.
Peyrache Adrien, Seibt Julie (2020) A mechanism for learning with sleep spindles,Philosophical Transactions of the Royal Society B: Biological Sciences375(1799)20190230pp. 1-14 The Royal Society
DOI: 10.1098/rstb.2019.0230
Spindles are ubiquitous oscillations during non-rapid eye movement (NREM) sleep. A growing body of evidence points to a possible link with learning and memory, and the underlying mechanisms are now starting to be unveiled. Specifically, spindles are associated with increased dendritic activity and high intracellular calcium levels, a situation favourable to plasticity, as well as with control of spiking output by feed-forward inhibition. During spindles, thalamocortical networks become unresponsive to inputs, thus potentially preventing interference between memory-related internal information processing and extrinsic signals. At the system level, spindles are co-modulated with other major NREM oscillations, including hippocampal sharp wave-ripples (SWRs) and neocortical slow waves, both previously shown to be associated with learning and memory. The sequential occurrence of reactivation at the time of SWRs followed by neuronal plasticity-promoting spindles is a possible mechanism to explain NREM sleep-dependent consolidation of memories.