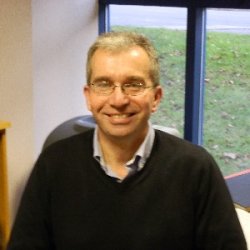 Keith graduated with a First Class BSc in Physics from the University of Surrey in 1981, and subsequently obtained his PhD in 1985 from the Optoelectronics group in the same department having carried out research on the temperature and pressure dependence of bulk and multi quantum well GaInAsP / InP semiconductor materials, Gunn diodes, LED's and Lasers. Following post graduate studies in the physics department on strained and unstrained quantum well lasers and then as the Philips Fellow in the Electrical Engineering department of the University of Surrey researching Erbium ion implantation into GaAlAs / GaAs quantum well structures Keith left Surrey University and between 1988 and 2004 he was employed as a physicist by BP and subsequently BP Solar, working in silicon solar cell research and development. In 2004 he joined Narec to initially set up the PV Technology Centre and then to enable it to grow and become the world's leading supplier of bespoke silicon concentrator cells. Whilst with BP Solar and Narec, Keith contributed to numerous European and UK funded research projects as well as running, and maintaining several characterisation laboratories dedicated to supporting the companies silicon solar cell manufacturing operations. Keith joined the Surrey Ion Beam Centre as the EPSRC funded Ion Implantation Research Fellow in February 2012.

Organic solar cells have attractive potential for space applications as they have very high specific power (power generated per weight) and ultra-high flexibility (to reduce stowed volume). However, one critical issue is whether they are stable under the harsh space environment, particularly their stability under high energy, high flux, electron and proton bombardment. In this paper, the stability of benchmark organic photovoltaic layers under proton bombardment (150 keV with a fluence of 1 × 1012/cm2) and electron bombardment (1 MeV with a fluence of 1 × 1013/cm2) under vacuum is investigated. Raman spectroscopy, photoluminescence spectroscopy, and optical reflectance spectroscopy are applied to study their chemical/structural, photo-chemical/morphological, and optical stability after the bombardments. The results show that all the benchmark organic photovoltaic films are stable under the radiation, implying that organic solar cells could be feasible for space applications.

Next generation concentrating photovoltaic technologies could have a large-scale impact on world electricity production once they will become economically attractive and grid parity will be reached. To proceed towards this important goal, a new large integrated project, APOLLON, has started in July 2008, within the frame of the 7th European Framework program, having the main objective of substantial decrease the Concentrating Photovoltaic (CPV) technology cost to a target value of 2 Euro/W. This ambitious objective is targeted to be reached after five years of research and technological activities in which, both "point focus" and "dense array" CPV technologies will be implemented by facing all the technology-critical issues related to each component of the CPV systems. With this contribution we report the principal results obtained during the first year of the project regarding Multi-Junction (MJ) solar cells, concentrator optics, assembling, tracking and testing. ©2009 IEEE.

LGBC silicon solar cells have demonstrated efficiencies up to 20% when used in linear focus concentrating systems up to 20X concentration. Small area cells of 1.2 cm2 have been cut from these cells and tested up to 100X concentration for point focus applications. A potential to achieve 20% efficiency at 100X has been recognised and independent results to date have shown an efficiency approaching 18% at 100X. Based on simple variations of a mass production process, analysis indicates that the manufacturing cost for such cells can be below $0.15/Wp. ©2005 IEEE.

The lattice locations of erbium implanted in silicon were studied by backscattering angular scanning in combination with photoluminescence measurements. The results show that the positions of erbium implants depend on annealing conditions and have tetrahedral and/or orthorhombic symmetries in different cases. © 1989.

Concentrator solar cells need to be designed optimally depending on the concentrating photovoltaic (CPV) system, application and operating conditions to ensure the best system performance. The important factors while designing include concentration ratio, cell material properties, expected operating temperature, cell shape, bus bar configuration, number of fingers their size and spacing. The irradiation incident on the solar cell while being concentrated experiences several losses caused by the different physical phenomena's occurring in the system. A particular issue for CPV technology is the non-uniformity of the incident flux on the solar cell which tends to cause hot spots, current mismatch and reduce the overall efficiency of the system. Understanding of this effect and designing the cell while considering these issues, would help in improving the overall performance of the system. This study focuses on modelling a low concentrating photovoltaic system used for building integration, optimising the cell metallisation and analysing the effects of temperature on the overall output of the system. The optical analysis of the concentrator is carried out using ray tracing and finite element methods to determine electrical and thermal performance under operating conditions. Furthermore, an analysis is made to understand the effects of non-uniformity on the output of the device. About 0.5% absolute drop in solar cell efficiency was observed due to non-uniformity at 5o incident angle. A relative drop of 1.85% was observed in the fill factor due to non-uniformity of the flux distribution. A maximum cell temperature of 349.5 K was observed across the cell in both uniform and non-uniform conditions under an incident solar radiation of 1000 W/m2 which further reduced the performance of the solar cell. The solar cell design was also analysed by varying the number of fingers and the optimum grid design reported. A small prototype concentrator based on the design proposed was made using polyurethane and tested experimentally with the optimized solar cell design. On comparing the results obtained using the experimental data a good agreement in the system output could be seen. The difference in the overall system output was seen to be of the order of 11% which could be due to several losses occurring in the prototype which were not accounted in the model. © 2013 Published by Elsevier B.V. All rights reserved.

After a gap of more than two decades, Concentrator Photovoltaics (CPV) technology is once again under spotlight for making use of the best available solar cell technologies and improving the overall performance. CPV finds its use in a number of applications ranging from building integration to huge power generation units. Although the principles of solar concentration are well understood, many practical design, operation, control issues require further understanding and research. A particular issue for CPV technology is the non-uniformity of the incident flux which tends to cause hot spots, current mismatch and reduce the overall efficiency of the system. Understanding of this effect requires further research, and shall help to employ the most successful means of using solar concentrators. This study reviews the causes and effects of the non-uniformity in the CPV systems. It highlights the importance of this issue in solar cell design and reviews the methods for the solar cell characterization under non-uniform flux conditions. Finally, it puts forward a few methods of improving the CPV performance by reducing the non-uniformity effect on the concentrator solar cells. © 2012 Elsevier Ltd.

Perovskite solar cells (PSCs) have gained increasing interest for space applications. However, before they can be deployed into space, their resistance to ionizing radiations, such as high‐energy protons, must be demonstrated. Herein, the effect of 150 keV protons on the performance of PSCs based on aluminum‐doped zinc oxide (AZO) transparent conducting oxide (TCO) is investigated. A record power conversion efficiency of 15% and 13.6% is obtained for cells based on AZO under AM1.5G and AM0 illumination, respectively. It is demonstrated that PSCs can withstand proton irradiation up to 10¹³ protons cm⁻² without significant loss in efficiency. From 10¹⁴ protons cm⁻², a decrease in short‐circuit current of PSCs is observed, which is consistent with interfacial degradation due to deterioration of the Spiro‐OMeTAD holes transport layer during proton irradiation. The structural and optical properties of perovskite remain intact up to high fluence levels. Although shallow trap states are induced by proton irradiation in perovskite bulk at low fluence levels, charges are released efficiently and are not detrimental to the cell's performance. This work highlights the potential of PSCs based on AZO TCO to be used for space applications and gives a deeper understanding of interfacial degradation due to proton irradiation.

In the paper the authors re-evaluate the influence of intervalence band absorption on the temperature sensitivity of 1.6 mu m (GaIn)(AsP)/InP lasers and emphasise its general importance in semiconductor lasers operating at several times their threshold current.