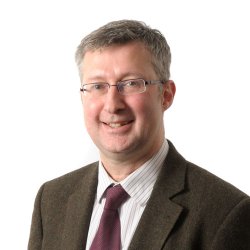 After graduating with a First in Electrical and Electronic Engineering from the University of Bath in 1986, I joined the UK Ministry of Defence to carry out research into improving the effectiveness and survivability of military satellites. As part of this I led the design, construction and launch of the 50kg STRV1a research satellite which performed its mission successfully from 1994-1999. In parallel I completed an MSc in Satellite Engineering at the University of Surrey, graduating with a Distinction.

I have a particular interest in the effects of space weather on operational spacecraft (and aircraft), especially electrostatic phenomena and also single event effects. I have been involved in a number of European Space Agency projects to develop new models of charging processes and have invented and flown novel instruments to measure and investigate such issues both in-orbit (e.g. the 'SURF' in-flight monitor) and within the atmosphere (aircraft based monitors).

In 2007 I was appointed to the position of Technical Fellow at QinetiQ (a spin-out from MoD) while leading a team dedicated to radiation environments and effects on technology. In 2012 I became a member of the Royal Academy of Engineering study team looking into Extreme Space Weather which reported in 2013. Soon thereafter I took up my current post at the University of Surrey as Reader in Space Engineering.

I am currently a member of the the UK Space Environment Impact Expert Group (SEIEG), which advises the UK Government on space weather risks, and of the Cosmic Ray Advisory Group (CRAG) which focuses on aviation-specific risks. I am Chartered Engineer and a Fellow of the IET.

Spacecraft must operate in a dynamic and hostile radiation environment which can interfere with, and sometimes damage, on-board technologies and systems. For astronauts and space tourists the radiation can even be life-threatening. Furthermore, radiation from space can penetrate deep down into the Earth's atmosphere where, once again, it can present problems for airborne (and sometimes even terrestrial) electronic systems and deliver radiation doses to passengers and crew. We seek to measure, understand and quantify these effects and propose solutions to improve the reliability and safety of both spacecraft and aircraft.

We work on the following areas:

The space environment is always changing primarily due to solar activity, which give us our local 'space weather'. In-situ measurements of space radiation are vital for determining the real hazards to satellites and aircraft on both a short term and long term (climatological) basis. We have developed novel in-situ instrumentation and flown this on numerous space missions (including collaborations with ESA, NASA and others) and we currently have a number of active monitors, including one on Giove-A operating in medium Earth orbit (20,000 km altitude).

Designers of spacecraft rely on models of the space environment to form a key part of their design specifications, however these are known to contain a number of inaccuracies and simplifications. We continually test the industry standard models by comparing them to measurement data and we are also participating in the development of new improved models e.g. the European FLUMIC model for outer belt electrons.

Space radiation can cause a number of effects in microelectronics including single event effects (SEE), ionising dose damage, displacement damage and electrostatic charging. As technology moves onward, previously unknown issues and problems come to light. We undertake experimental research using test facilities not just here at Surrey but also all over the world to examine the behaviour of the latest technologies and determine what protection measures are needed. We are especially interested in extreme space weather effects and are a founding member of the EU SPACESTORM programme carrying out research into such issues.

Atmospheric Radiation and Effects on Aircraft

During strong solar storms radiation levels within the atmosphere can increase by factors of 100 or more at aviation altitudes and we aim to capture these events using our own instruments on balloons and aircraft. We participate in international programmes (e.g with NASA, UK Met Office, and various airlines) for measuring radiation (e.g. neutrons and muons) generated by particles impacting the top of our atmosphere and we study the effects of these on technological systems, especially microelectronics.

We provide advice and consultancy to government committees (e.g. the Space Environment Impact Expert Group and the Cosmic Ray Advisory Group) as well as to industry such as SSTL, EDF and QinetiQ.

Solar energetic particle events create radiation risks for aircraft, notably single event effects (SEEs) in microelectronics along with increased dose to crew and passengers. In response to this, some airlines modify their flight routes after automatic alerts are issued. At present these alerts are based on proton flux measurements from instruments on-board satellites, so it is important that contemporary atmospheric radiation measurements are made and compared.

This paper presents the development of a rapid-response system built around the use of radiosondes equipped with a radiation detector, Zenith, which can be launched from a Met Office weather station after significant solar proton level alerts are issued. Zenith is a compact, battery-powered solid-state radiation monitor designed to be connected to a Vaisala RS-92 radiosonde which transmits all data to a ground station as it ascends to an altitude of ~33 km. Zenith can also be operated as a stand-alone detector when connected to a laptop, providing real-time count rates. It can also be adapted for use on unmanned aerial vehicles.

Zenith has been flown on the Met Office Civil Contingency Aircraft (MOCCA), taken to the CERN-EU high energy Reference Field (CERF) facility for calibration and launched on a meteorological balloon at the Met Office's weather station in Camborne, Cornwall, UK. During this sounding, Zenith measured the Pfotzer-Regener maximum to be at an altitude of 18 - 20 km where the count rate was measured to be 1.15 counts s-1 cm-2 compared to 0.02 counts s-1 cm-2 at ground level.

Hands ADP, Ryden Keith, Meredith NP, Glauert SA, Horne RB (2018) Radiation Effects on Satellites During Extreme Space Weather Events, Space Weather 16 (9) pp. 1216-1226 American Geophysical Union
DOI: 10.1029/2018SW001913
High-energy trapped electrons in the Van Allen belts pose a threat to the survivability of orbiting
spacecraft. Two key radiation effects are total ionizing dose and displacement damage dose in components
and materials, both of which cause cumulative and largely irreversible damage. During an extreme space
weather event, trapped electron
fl
uxes in the Van Allen belts can increase by several orders of magnitude in
intensity, leading to an enhanced risk of satellite failure. We use extreme environments generated by
modeling and statistical analyses to estimate the consequences for satellites in terms of the radiation effects
described above. A worst-case event could lead to signi
fi
cant losses in power generating capability
?
up
to almost 8%
?
and cause up to four years
?
worth of ionizing dose degradation, leading to component
damage and a life-shortening effect on satellites. The consequences of such losses are hugely signi
fi
cant
given our increasing reliance on satellites for a vast array of services, including communication, navigation,
defense, and critical infrastructure.
Horne Richard B, Phillips Mark W, Glauert Sarah A, Meredith Nigel P, Hands Alexander, Ryden Keith, Liu Wen (2018) Realistic Worst Case for a Severe Space Weather Event Driven by a Fast Solar Wind Stream, Space Weather 16 (9) pp. 1202-1215 American Geophysical Union
DOI: 10.1029/2018SW001948
Satellite charging is one of the most important risks for satellites on orbit. Satellite charging can lead to an electrostatic discharge resulting in component damage, phantom commands, and loss of service and in exceptional cases total satellite loss. Here we construct a realistic worst case for a fast solar wind stream event lasting 5 days or more and use a physical model to calculate the maximum electron flux greater than 2 MeV for geostationary orbit. We find that the flux tends toward a value of 106 cm?2·s?1·sr?1 after 5 days and remains high for another 5 days. The resulting flux is comparable to a 1 in 150?year event found from an independent statistical analysis of electron data. Approximately 2.5 mm of Al shielding would be required to reduce the internal charging current to below the National Aeronautics and Space Administration?recommended guidelines, much more than is currently used. Thus, we would expect many satellites to report electrostatic discharge anomalies during such an event with a strong likelihood of service outage and total satellite loss. We conclude that satellites at geostationary orbit are more likely to be at risk from fast solar wind stream event than a Carrington?type storm.
Jones Bryn, Dyer C, Hands Alexander, Iles R, Ryden Keith, Smith M, Stills M, Taylor G (2010) Development in Aviation Space Weather Services, AMS Poster paper
In 1998, the first Polar route test flight between Asia and North America was carried out. By the end of 2009, over 10,000 Polar flights will have taken place. However, as cross polar traffic continues to increase, the aviation industry is realising the impacts that space weather has on high-altitude, high-latitude, flights (>50ýN) and polar operations (>78ýN). Effects include disruption in High Frequency (HF) communications, satellite navigation system errors, and radiation hazards to humans and avionics.

These concerns not only apply to current operations, but become even more important at all latitudes when considered within the framework for the Next Generation Air Transportation System (NextGen), an interagency initiative to transform the U.S. air transportation system by 2025.

The AMS/SolarMetrics report, Integrating Space Weather Observations and Forecasts into Aviation Operations (published March 2007), offers recommendations to increase the safety, reliability, and efficiency of aviation operations through more effective use of space weather information. This report highlighted several policy issues that need to be addressed to ensure the best use of current and future space weather information, namely:

. Standardization of information and regulations

SolarMetrics is working with the airline and space transportation industries to identify and develop new integrated space weather services that will meet their demands for real-time operational decision tools and products.

This poster will present some of the operational issues raised above and how they are being tackled.

Historically, gathering data on atmospheric radiation levels during solar particle events (SPEs) has been difficult, as there is little or no time warning of events. Being able to accurately quantify radiation levels within the atmosphere during solar events is of significance to the aviation industry, as described in the International Civil Aviation Organization's (ICAO) Space Weather manual, particularly during a large Ground Level Enhancement (GLE) where the ionising dose to passengers and crew can exceed the recommended general public annual dose limits, set by the International Commission for Radiological Protection (ICRP) Barlett, Beck, Bilski, Bottollier?Depois, and Lindborg (2004), in one flight.

The Smart Atmospheric Ionising RAdiation (SAIRA) Monitoring Network is a new system of handheld radiation detectors that can be carried on aircraft to monitor and record atmospheric radiation levels. The system operates via citizen science volunteers, who record radiation data as they travel for normal purposes.

Over 30 flights have been conducted with volunteers to demonstrate that a citizen science network is possible. Volunteers have used a new Android application to record and upload data to a central server to form a database of flight measurements. The demonstration has shown there is a willingness in public volunteers to use radiation detectors and engage in science outreach.

A fully developed system will ideally provide the capability to quantify radiation levels during a Solar Particle Event (SPE) or GLE and the data can be used by relevant organisations to minimise potential risks.