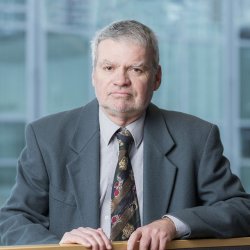 Professor Homewood started his research career within the Department of Electrical Engineering at the University of Manchester Institute of Science and technology (UMIST) obtaining his PhD in 1981. He subsequently spent a period as a Research Fellow at the University of Hull in the Department of Physics. Kevin was appointed Lecturer in Optoelectronics in the Department of Electronic and Electrical Engineering at Surrey in 1984 and was promoted directly to Reader in Semiconductors in 1994 and then to Professor of Semiconductor Optoelectronics in 1999.

At Surrey he has established world-class facilities in electronic and optical characterisation of semiconductors and an active personal research group, which he has led for the past 19 years. He has recently concentrated on developing novel approaches to silicon based optoelectronics and this work is recognised to be world leading in many areas. Kevin is an acknowledged world expert in semiconductor materials and devices and has published more than 180 papers in international scientific journals, including two papers in NATURE that have stimulated international research efforts in semiconducting silicides and silicon optoelectronics. He was recently awarded a prestigous European Research Council Advanced Investigator Grant (SILAMPS) of around £ 2,000,000 to develop silicon based lasers and optical amplifiers over the next five years. He was a cofounder and is a Director of SiLight Technology Ltd.