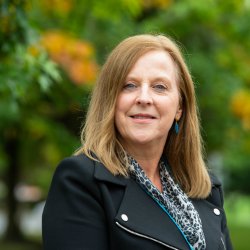 Kim began her academic studies at Queen Mary, University of London graduating with a BSc (Econ) in Politics and Law. She subsequently spent a decade in the finance industry working for a City brokerage where she provided legal consultancy services to blue-chip corporate clients.This was followed by fifteen years in the commercial television sector, during which time she received sponsorship from her employer Independent Television (ITV) to pursue an MA in Journalism at the University of Westminster. She subsequently worked in the press team at Independent Television News (ITN) where she held the position of Head of Internal Communications. Kim returned to academia in 2010, studying for an MA in audiovisual translation at the University of Surrey's Centre for Translation Studies.

Kim was awarded a full doctoral studentship by the AHRC/UKRI, gaining her PhD in intralingual translation. Her doctoral research focused on the use of audio description for the purposes of conveying emotions in film content to children on the autism spectrum.

She has since held two research fellow posts, the first working on the human analysis of machine-generated AV captioning data, under the umbrella of the EU-funded MeMAD (Methods for Managing Audiovisual Data) project, and currently as a researcher across translation and multimodal technologies.

Methods for Managing Audiovisual Data: Combining Automatic Efficiency with Human Accuracy (MeMAD)
MeMAD is an European Union research project (2018-2020) led by Aalto University (Finland). The project will develop novel methods and models for managing and accessing digital audiovisual information in multiple languages and for various use contexts and audiences, based on a combination of computer vision technologies, human input and machine learning approaches to derive enhanced descriptions of audio-visual content. These descriptions will benefit the creative industries, especially television broadcasters and on-demand media service providers, as well as people using their services, by enabling them to access audiovisual information in novel ways.
Horizon 2020

Kim has taught the Academic Writing series of seminars for the past three years at the Centre for Translation Studies.