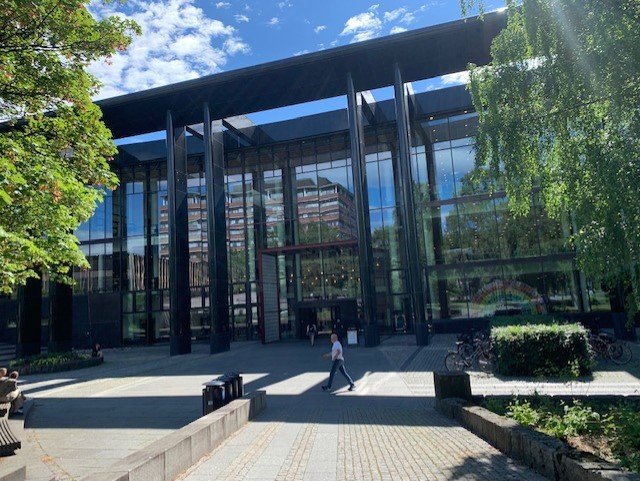 Elena Davitti and Annalisa Sandrelli presented a paper on the ESRC-funded project SMART (Shaping Multilingual Access through Respeaking Technology ES/T002530/1) as part of a panel, “Advancing Translation Studies through task comparative and hybrid task research into multilectal communication”. Their paper, Hybrid workflows for realtime interlingual communication via speech recognition: the SMART project, focussed on interlingual respeaking, a speech recognition-based method that relies on human-machine interaction where the human listens to live input, and simultaneously translates that input into speech recognition software, which turns it into subtitles in the target language. As a form of ‘simultaneous interpreting 2.0‘, it classifies as a hybrid practice. Based on findings from the SMART project, the presentation discussed the multifactorial and multimethod design used to explore the human variables (procedural, cognitive, interpersonal) involved in this complex practice.

In a parallel session, PhD candidates Eloy Rodriguez González and Muhammad Ahmed Saeed presented their linked projects in a paper entitled: The new remoteness: investigating the role of interface design and automatic speech recognition in supporting interpreters in cloud-based remote simultaneous interpreting environments. Their project aims to explore the types of visual information that are best suited to support the interpreting process and the interpreter-machine interaction in cloud-based RSI environments. They are also investigating how this information is best presented in the interpreter’s interface, and ways automatic speech recognition can be integrated into an RSI platform to aid/augment the interpreter’s source-speech comprehension. Eloy and Muhammad are supported in their research by supervisors Prof. Sabine Braun, Dr Elena Davitti and Dr Tomasz Korybski.

Kim Starr and Sabine Braun presented their work From Caption to Content Description, based on closing the gap between human-derived video descriptions – by reference to both audio description (AD) and content description (CD) text types - and machine descriptions (MD) generated by AI-based computer models. Reflecting on their work in the MeMAD (‘Methods for Managing Audiovisual Data: Combining Automatic Efficiency with Human Accuracy’) project, Kim and Sabine presented an overview of the key characteristics and differences in output quality between the three varieties of video description, suggesting that CD, as a basic summary of narrative action, could appeal to a broader audience base than traditional AD, and be more readily developed as a machine-based practice. As an alternative to AD, machine-assisted CD was discussed as a way to open up new content streams to people with cognitive difference and audio-centric viewing habits, as well as those with sight impairment. Their presentation concluded with consideration of next steps in the development of video description as an audiovisual accessibility service, as it reaches a critical point in human-machine convergence.

Finally, the CTS’s Félix do Carmo, together with colleagues Dorothy Kenny (Dublin City University) and Mary Nurminen (University of Tampere) convened one of the most attended panels at the conference. The theme of the panel was “Is machine translation, translation?”, a question which teased several interventions covering current concerns in the discipline of Translation Studies. While there is consensus that machine translation has to be incorporated into the study of translation, the implications and extent of the consequences of that inclusion are still not clear. The panel discussion touched upon fundamental aspects of the discipline, initiating a reflection which will doubtless continue in other forums and publications for many years into the future.