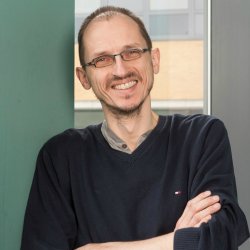 Klaus Moessner is Professor in Cognitive Networks in the 5G Innovation Centre (5GIC). He has been actively involved in the various European Community funded research frameworks (from FP 5 onwards). He has also had involvement in some 20+ other EU funded projects, has been technical manager and project manager, has led the FP7 project SocIoTal and is currently leading the H2020 EU-Japan project iKaaS, the 5G PPP project Speed5G, and from September 2017 the EU-Taiwan project Clear5G. Klaus' research interests are around the aspects of resource management in wireless communication systems, reconfigurability on the different system levels, including reconfiguration management and scheduling in wireless networks as well as network supported adaptability of multimodal user interfaces. He was founding chair of the IEEE DySPAN working group 6 on Spectrum Sensing Interfaces.He is actively involved in the investigation and teaching of mobile service provision (including IoT deployments and services). His research includes the area of resource efficiency and on mechanisms for dynamic resource allocation. And he is contributing to the work on System Architecture and Co-existence aspects in the 5GIC, covering aspects including dynamic spectrum sharing/access, self-organisation of the radio access and the regulatory implications of DSA and Cognitive Radio Networks.

His work beyond 5G includes methods for dynamic capacity extension in mobile environments.

Since Mai 2019, Klaus is also head of the Professorship of Communications Engineering at the Technische Universität Chemnitz, Germany.

My research interests include cognitive networks, IoT deployments and sensor data based knowledge generation, as well as reconfiguration and resource management.

Speed5G
5G promises to deliver throughput and capacity, together with ultra-low latency and reliability, at levels that allow the introduction of hitherto unseen services. At the operational level, 5G systems are expected to support: 1,000 times higher mobile data volume per geographical area, 10 to 100 times higher number of connected devices, and 10 to 100 times higher typical user data rate, and a host of other requirements on latency, energy-efficiency, device density etc. It will take a multipronged approach to achieve these targets: allocation of new spectrum bands (including in the mmWave range), integration of multiple RATs (Radio Access Technology) for efficient utilization of heterogeneous resources as well as reduction of cell size and densification of cells will all contribute their share to achieve these increases. The Speed-5G project has tackled the capacity challenge through tight integration of different RATs at MAC-layer, spectrum sharing and a much more dynamic use of spectrum and radio resources, leading to significant efficiencies and higher capacity. The Speed-5G project has defined and evaluated the eDSA (enhanced Dynamic Spectrum Access) approach based on novel solutions for resource aggregation, sharing and dynamic allocation of spectrum and radio resource management, i.e. the hierarchical RRM approach. The introduction of different levels of resource management, operating at different time-scales as well as the stratification of the traditional MAC layer, as introduced by Speed-5G, enable support of use-case and application-specific optimization of the radio resources. The Speed 5G project has been funded by the European Commission under Horizon 2020, the EU Framework Programme for Research and Innovation, grant agreement number 671705.
Clear 5G
details to follow
PETRAS - Internet of Things Research HuB
details to follow
TagItSmart
TagItSmart is about a "Smart Tags driven service platform for enabling ecosystems of connected objects". IoT is about connecting objects, things, devices, billions of them, and not only the obvious ones like smart phones, TVs, cameras, or the usual examples of objects like cars, homes, fridges, coffee machines, kettles, glasses etc. All of these can be easily connected and that at a very low cost. The main challange is to connect any time of object or consumer good, and to do so at a very low cost: a carton of milk, a package of steak, a basket of apples, a book, a CD etc. Typically, these products are identified by printed tags (barcodes, QR codes). The codes relate directly to the product (type) they tag, however not to the unique unit/object that holds the tag. Once attached to an object, tags are usually static and the information they provide does not change, regardless of the state or events happening in the immediate environment of that product. The main emphasis of TagItSmart is to use the feature of dynamic codes, consisting of codes printed with functional ink, that change according to the context changes to which a object is being exposed. Smart phones are used to capture/record/transmit these codes which then creates context sensors for mass-market products and converts these mass-market products into "connected mass-market products" with unique identity and unique records about their history. TagItSmart:     Functional ink + optical (area) tags + crowd sourced smart phones + cloud = IoT for mass-market domain across application sectors

I am constantly searching for new PhD students for a wide range of research topics including (but not limited to):

There is no fixed funding allocation to support PhD students, meaning you will have to find your own funding from national programms or alike. However, there are many external funding sources and I am very happy to help, saying this, occasionally we may have funding available to fund research students. Independent of the funding situation, if you do have research ideas, or a research proposal in any of these areas, please do contact me.

2020/21 projects for UGs and MSc's are available as shown below.

Typically, I am offering offering Final Year and MSc projects in the areas:

An initial analysis of 5G has shown that it is a radical departure form the generational trend: In particular headline rates and capacities which are X10 and X100 greater than the improvement attained with previous, more evolutionary, upgrades. In order to achieve these metrics will require extreme densification of the network given the spectrum that is available for 5G. A compelling case is made that this densification will cause costs to balloon.

It has been shown that reaching headline rates of 64-100Mbps everywhere is possible with a number of different technology options. Massive increases in capacity (in excess of 100Gbps/km²), however, can only be realistically achieved with millimetre wave (outdoor) and internal base stations The cost of deploying such capacity, however, will be several times that of LTE – we estimate a 4 to 5 times increase in costs for a 100Mbps everywhere network that has x100 capacity increase over existing LTE networks.

One possible way of reducing the costs of 5G and increasing capacity is to place femto or distributed base-stations within buildings: we have demonstrated 3Tbps/km² of capacity with 5,800 femto cells per km² for a neutral hosted solution. However, there is a substantial up-front cost to utilizing internal base-stations: fibre back-haul and internal fibre needs to be installed. This initial cost is identified as significant barrier.

Recently, an upsurge of interest has been observed in providing multimedia on-demand (MoD) services to mobile users over wireless networks. Nevertheless, due to the rapidly varying nature of mobile networks and the scarcity of radio resources, the commercial implementation is still limited. This paper presents an efficient group-based multimedia-on-demand (GMoD) service model over multicast-enabled wireless infrastructures, where users requesting the same content are grouped and served simultaneously with a single multicast stream. The grouping is fulfilled through a process named "batching". An analytical model is derived to analyse a timeout-based hatching scheme with respect to the tradeoff between user blocking probability and reneging probability. Based on the deduced analytical model, an optimal timeout-based hatching scheme is proposed to dynamically identify the optimal tradeoff point that maximizes the system satisfaction ratio given a particular system status. The proposed scheme is evaluated by means of simulation and compared with two basic hatching schemes (timeout-based, size-based), and two hybrid ones (combined-for-profit, combined-for-loss). The simulation results demonstrate the proposed approach can ensure significant gains in terms of user satisfaction ratio, with low reneging and blocking probabilities.