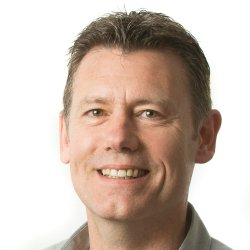 Fellow of the Institute of Materials, Minerals and Mining (FIMMM)
Chartered Scientist (CSci) 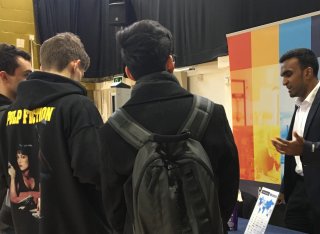 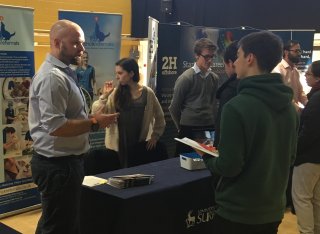 Mini-fair opens students’ eyes to the benefits of smaller companies

My main research activity is in the field of single layer, multilayer and nanocomposite inorganic thin films and coatings for wear/corrosion resistance or functional applications. Most thin films and coatings are deposited by vacuum methods, such as sputtering, evaporation or CVD. Examples of coating systems I have worked on include TiN, metal doped DLC, N doped TiO2, ITO, nc-TiB2/a-BN, nc-TiN/a-MoS2 and multilayer systems i.e. for solar cell applications. My research is focussed on the use of advanced materials characterisation techniques to determine and understand the composition, bonding and nanostructure of the thin films and coatings. Techniques employed include XPS, AES, XRD, TEM, SEM, AFM, FIB-SEM. I work with other research groups or industrial partners to develop a thorough understanding of process-structure-property relationships for the thin films and coatings.

Other research interests are in the fields of:

Approximately 35 % of the global energy production is consumed by urban environment, principally through heating, cooling and lighting. Energy conserving "smart" windows employ thermochromic coatings which have the ability to change their optical properties depending on the ambient temperature. At low temperatures, the metal oxide coating is transparent to warming infrared radiation, promoting higher temperatures within the building. At higher temperatures, a phase transition to a metallic conductor results in reflection of the infrared radiation, cooling the interior. Thus, such thermochromic coatings offer great promise in energy conservation and reduction of CO2 emissions. However, challenges remain due to the relatively high phase transition temperature (e.g. 68 °C for pure VO2), environmental stability and requirement for large area coating deposition which have prevented successful commercialisation to date.

This joint EPSRC/TISICS sponsored project is aimed at improving and optimising the process for CVD growth of silicon carbide coated tungsten fibres in metal matrix composites for aerospace applications. A combination of materials characterisation techniques (FIB-SEM, XCT, SEM, Raman etc) is providing a good understanding of defects formed in the coating. Subsequently process modification will action their eradication and improve the uniformity and quality of the fibre and metal matrix composite (2018-2022)

This DSTL funded project is investigating the microstructure and corrosion resistance of additive manufactured steels used in defence applications. (2018-2021)

This EPSRC/NPL sponsored project aims to develop standard samples and protocols for advanced AFM based techniques such as electrical (conductive-AFM, Scanning Kelvin Probe Microscopy) and chemical (Tip-Enhanced Raman Spectroscopy) modes. The work aims to quantify the analysis depth and lateral resolution of the AFM based techniques and involves both modelling and experimental studies. (2017-2020)

This Smiths Interconnect funded project is exploring the next generation of micro-connectors based on carbon nanotubes. The work involves growth of carbon nanotube arrays, characterisation using TEM and Raman and testing the electrical/mechanical performance and durability of the connectors (2016-2019)

I teach on both Undergraduate and Postgraduate programmes in the Department of Mechanical Engineering Sciences.

I am also the Senior Tutor for Professional Training in the Department, working with many companies and RTOs to place our sandwich course students on 12 month placements, enhancing their skills and experience for graduate employment.