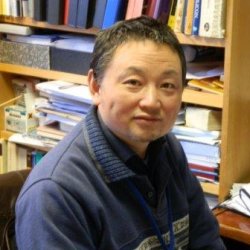 I started my academic career as a physicist by training. I went to Wuhan University in October 1978 to read a four year BSc degree course in Semiconductor Physics. This was followed by a three year MSc degree course in Solid State Physics from September 1982 to August 1985.

From September 1985, I became a junior staff member working in Physics Department at Wuhan University, first as demonstrator and then promoted to junior lecturer position two years later. My research interest at Wuhan University was on the electronic structures and optical properties of layered 3d transition metal intercalated transition metal dichalcogenide crystals.

In 1988, I was awarded a Bank of Credit and Commerce International (BCCI) scholarship and Overseas Research Scholarship (ORS) for my PhD study in Physics and Chemistry of Solids (PCS) Group at Cavendish Laboratory, Cambridge University.

I joined Surrey Ion Beam Centre from January 1998, first on the fabrication of high temperature superconductor Josephson junctions using masked ion beam irradiation, later as a Liaison Fellow working with a number of research projects supported by EPSRC and other funding agencies.

In a few words, my research interest is mainly on the experimental manipulation of physical properties of novel solid state materials under extreme physical conditions such as temperature, pressure and ion beam irradiation/implantation etc. Typical examples include:

We have studied the magnetization of vertically aligned graphene nanoflakes irradiated with nitrogen ions of 100 KeV energy and doses in the range 10¹¹–10¹⁷ ions/cm². The non-irradiated graphene nanoflakes show a paramagnetic contribution, which is increased progressively by ion irradiation at low doses up to 10¹⁵/cm². However, further increase on implantation dose reduces the magnetic moment which coincides with the onset of amorphization as verified by both Raman and x-ray photoelectron spectroscopic data. Overall, our results demonstrate the absence of ferromagnetism on either implanted or unimplanted samples from room temperature down to a temperature of 5 K.

An understanding of the effect of cumulative radiation damage on the integrity of ceramic wasteforms for plutonium and minor actinide disposition is key to the scientific case for safe disposal. Alpha recoil due to the decay of actinide species leads to the amorphisation of the initially crystalline host matrix, with potentially deleterious consequences such as macroscopic volume swelling and reduced resistance to aqueous dissolution. For the purpose of laboratory studies the effect of radiation damage can be simulated by various accelerated methodologies. The incorporation of short-lived actinide isotopes accurately reproduces damage arising from both alpha-particle and the heavy recoil nucleus, but requires access to specialist facilities. In contrast, fast ion implantation of inactive model ceramics effectively simulates the heavy recoil nucleus, leading to amorphisation of the host crystal lattice over very short time-scales. Although the resulting materials are easily handled, quantitative analysis of the resulting damaged surface layer has proved challenging. In this investigation, we have developed an experimental methodology for characterisation of radiation damaged structures in candidate ceramics for actinide disposition. Our approach involves implantation of bulk ceramic samples with 2 MeV Kr+ ions, to simulate heavy atom recoil; combined with grazing incidence X-ray absorption spectroscopy (GI-XAS) to characterise only the damaged surface layer. Here we present experimental GI-XAS data acquired at the Ti and Zr K-edges of ion implanted zirconolite, as a function of grazing angle, demonstrating that this technique can be successfully applied to characterise only the amorphised surface layer. Comparison of our findings with data from metamict natural analogues provide evidence that heavy ion implantation reproduces the amorphous structure arising from naturally accumulated radiation damage.

Penetration of a nanochannel mask by 190keV Co ions is tested for the purpose of achieving laterally modulated ion implantation into a SiO thin film on a Si substrate. A 2D-nanoporous membrane of anodic aluminum oxide (AAO) is chosen as the mask. Criteria and challenges for designing the mask are presented. Implantation experiments through a mask with pore diameter of 125 nm and inter-pore distance of 260 nm are carried out. Cross-sectional TEM (XTEM) is shown as an ideal tool to assess depth distribution and lateral distribution of implanted ions at the same time, complemented by Rutherford backscattering spectroscopy. Using energy dispersive x-ray spectroscopy linescans, a Co distribution with lateral modulation is found at 120 nm below the oxide surface. First experiments in converting the atomic distribution of Co to discrete nanoparticles by in-situ TEM annealing are presented. © 2012 Materials Research Society.

Both Rutherford backscatterings of He-4(+) beams and non-Rutherford backscatterings of He-4(+) and H+ beams have been used in this study to investigate the depth profiles of B dopant in Mg target upon B implantation and post annealing. Primitive data analysis suggests an enhanced diffusion of surface C contaminant during the B implantation process, together with enhanced surface oxidation upon implantation and thermal annealing in flowing N-2 atmosphere. Published by Elsevier B.V.

The electrical characteristics of gallium-doped zinc oxide (ZnO:Ga) thin films prepared by rf diode sputtering were altered via nitrogen implantation by performing two implants at 40 keV and 80 keV with doses of 1×1015 and 1×1016 cm−2 to achieve a p-type semiconductor. An implantation of 1×1015 cm−2 N+-ions yielded a p-type with hole concentrations 1017–1018 cm−3 in some as-implanted samples. The films annealed at temperatures above 200°C in O2 and above 400°C in N2 were n-type with electron concentrations 1017–1020 cm−3. The higher nitrogen concentration (confirmed by SRIM and SIMS), in the films implanted with a 1×1016 cm−2 dose, resulted in lower electron concentrations, respectively, higher resistivity, due to compensation of donors by nitrogen acceptors. The electron concentrations ratio n(1×1015)/n(1×1016) decreases with increasing annealing temperature. Hall measurements showed that 1×1016 cm−2 N-implanted films became p-type after low temperature annealing in O2 at 200°C and in N2 at 400°C with hole concentrations of 3.2×1017 cm−3 and 1.6×1019 cm−3, respectively. Nitrogen-implanted ZnO:Ga films showed a c-axes preferred orientation of the crystallites. Annealing is shown to increase the average transmittance (>80%) of the films and to cause bandgap widening (3.19–3.3 eV).

Progress in ion implantation of metal ions into substrates of amorphous silica or Si-nitride with respect to lateral periodic patterning is presented. We use a 2D-nanoporous membrane of anodic aluminium oxide (AAO) as mask to conduct the Co ion implantations. The criteria for successful masked implantation and main problems are presented, including testing of the masks in a focused ion beam (FIB) system. It is proposed that electron transparent thin windows are the most suitable substrate for methods development, as TEM observation can be followed without any further sample milling. Co clusters are found to exhibit the same lateral order as the pores, and first annealing tests to achieve Co nanoparticles are shown using an in-situ heating TEM holder. © 2012 IEEE.

Understanding the effect of radiation damage and noble gas accommodation in potential ceramic hosts for plutonium disposition is necessary to evaluate their long-term behaviour during geological disposal. Polycrystalline samples of Nd-doped zirconolite and Nd-doped perovskite were irradiated ex situ with 2 MeV Kr+ at a dose of 5 1015 ions cm2 to simulate recoil of Pu nuclei during alpha decay. The feasibility of thin section preparation of both pristine and irradiated samples by Focused Ion Beam sectioning was demonstrated. After irradiation, the Nd-doped zirconolite revealed a well defined amorphous region separated from the pristine material by a thin (40–60 nm) damaged interface. The zirconolite lattice was lost in the damaged interface, but the fluorite sublattice was retained. The Nd-doped perovskite contained a defined irradiated layer composed of an amorphous region surrounded by damaged but still crystalline layers. The structural evolution of the damaged regions is consistent with a change from orthorhombic to cubic symmetry. In addition in Nd-doped perovskite, the amorphisation dose depended on crystallographic orientation and possibly sample configuration (thin section or bulk). Electron Energy Loss Spectroscopy revealed Ti remained in the 4+ oxidation state but there was a change in Ti coordination in both Nd-doped perovskite and Nd-doped zirconolite associated with the crystalline to amorphous transition.