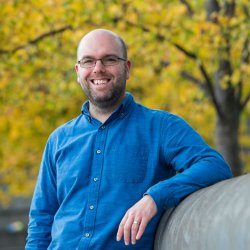 I joined the Institute of Sound Recording as a Lecturer in 2017. I conduct world-leading research into audio technology for personalised audio experiences, mentor/supervise postgraduate research students, and teach the theory of audio engineering to undergraduates.

Previously, I worked in the Centre for Vision, Speech and Signal Processing (CVSSP) as a Research Fellow on the S3A project: future spatial audio for an immersive listening experience at home. I received my PhD from CVSSP in 2014 under the supervision of Dr Philip Jackson, as part of the Perceptually Optimized Sound Zones (POSZ) project. Previously, I received an MSc in Multimedia Signal Processing and Communications from the University of Surrey, and a BEng degree in Electronic Engineering with Music Technology Systems at the University of York.

My research expertise are in the areas of loudspeaker and microphone array processing, sound zones, object-based audio, reverberation, and production tools for 3D spatial audio. Please see the sections below for more details about specific research projects, key publications, and publicly available code.

The S3A project was a five-year UK research collaboration between internationally leading experts in 3D audio and visual processing at the Universities of Surrey, Salford and Southampton and BBC R&D.

My core research contributions were in the area of object-based reverberation and audio capture using microphone arrays. I also co-ordinated two of the cross-partner research challenges.

An Audio-Visual System for Object-Based Audio: From Recording to Listening

The relationship between target quality and interference in sound zones

I co-supervised PhD Student Miguel Blanco Galindo in his investigations into microphone array designs for capturing and separating audio as part of an object-based audio workflow.

Beamforming code (in Matlab) is available via Github.

Research at the Institute of Sound Recording (IoSR) is based on understanding listener experiences and developing perceptually-optimised signal processing approaches to improve them. A list of current opportunities for competitive PhD scholarships is maintained by the Surrey Doctoral College.

I teach the theory of audio engineering to undergraduates, including analogue electronics and C/C++ programming. I also teach the fundamentals of audio research and supervise undergraduate technical projects.