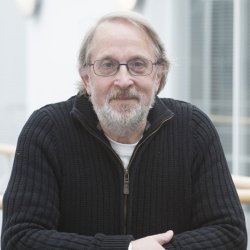 Roger joined the Department in 1983 as a Research Fellow with the SRC (as it was then - interesting how the EPSRC has gained letters over the years) Surrey Ion Beam Centre. He was employed to look after the computing facilities associated with the research group - a single pdp11, about half of the computer "power" in the department in those days.

Before this he had spent 3 years as a post doc at the Naval Postgraduate School in Monterey California, making Molecular Dynamics Studies and Computer Animations, which is still the main area of his research activities. He did his PhD work in the Electronic & Electrical Engineering Department of the University of Salford, on the Mathematical Modelling of Atomic Collisions in Solids.

He was made a Lecturer in the Department in 1986, promoted to Senior Lecturer in 1993 and then to Reader in 1997, reaching the dizzy heights of Professor of Ion Beam Physics in 2002. He is the current Director of the Surrey Ion Beam Centre.

He has performed research at Penn State College and the Chinese University of Hong Kong. 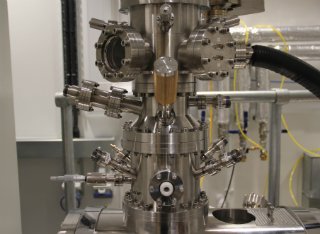 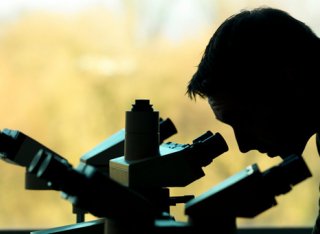 Main area of research is the interaction of energetic ion beams with solids.Current research activities include the use of Molecular Dynamics Simulations to predict the behaviour of cluster and molecular impacts on surfaces. As well as the use of more simple Binary Collisions simulations to predict the effects of energetic particle solid interactions, in particular ion implantation profiles in crystalline solids.

Cluster and molecular impacts include fullerene impact induced desorption of molecular solids. Other areas of interest are in automation and control of ion beam analysis equipment. This includes software to automate the collection of data from standard analyses using RBS, PIXE, PIGE, NRA and ERD.

He must also take some responsibility for the windows interface to the Data Furnace for the automated and rapid analysis of experimental ion scattering data. Developments in the use of MeV ion beams for Secondary Ion Mass Spectrometry (SIMS) is also of current interest.

Research Funding over past 10 years:

Fingerprint samples (n=100) were collected from the hands of 50 nondrug users before and after handwashing to establish separate environmental cutoff values and testing protocols for cocaine, benzoylecgonine, heroin, and 6-monoacetylmorphine. The cutoff was challenged by testing the fingerprints of drug-free volunteers after shaking hands with drug users. Fingerprints from patients who testified to taking cocaine (n = 32) and heroin (n = 24) were also collected and analyzed.

A different cutoff value needed to be applied, depending on whether the fingerprints were collected as presented or after handwashing. Applying these cutoffs gave a 0%false-positive rate from the drug-free volunteers. After application of the cutoff, the detection rate (compared to patient testimony) for washed hands of patients was 87.5% for cocaine use and 100% for heroin use.

Fingerprints show enhanced levels of cocaine, heroin, and their respective metabolites in patients who testified to taking the substances, compared with the population of naı¨ve drug users surveyed, and a cutoff (decision level) can be established. The cutoff is robust enough to account for small increases in analyte observed after secondary transfer.

Fingerprint samples were collected from (a) 10 patients attending a drug rehabilitation clinic (b) 50 non-drug users (c) participants who touched 2 mg street heroin, before and after various hand cleaning procedures. Oral fluid was also taken from the patients. All samples were analysed using a liquid chromatography – high resolution mass spectrometry (LC-HRMS) method validated in previous work for heroin and 6-AM. The HRMS data was analysed retrospectively for morphine, codeine, 6-acetylcodeine and noscapine. Heroin and 6-AM were detected in all fingerprint samples produced from contact with heroin, even after handwashing. In contrast, morphine, acetylcodeine and noscapine were successfully removed after handwashing.

This research highlights the importance of washing hands prior to donating a fingerprint sample to distinguish recent contact with heroin from heroin use.

BACKGROUND: Paper spray mass spectrometry6 is a technique that has recently emerged and has shown excellent analytical sensitivity to a number of drugs in blood. As an alternative to blood, fingerprints have been shown to provide a noninvasive and traceable sampling matrix. Our goal was to validate the use of fingerprint samples to detect cocaine use.

METHODS: Samples were collected on triangular pieces (168 mm2) of washed Whatman Grade I chromatography paper. Following application of internal standard, spray solvent and a voltage were applied to the paper before mass spectrometry detection. A fingerprint visualization step was incorporated into the analysis procedure by addition of silver nitrate solution and exposing the sample to ultraviolet light.

RESULTS: Limits of detection for cocaine, benzoylecgonine, and methylecgonine were 1, 2, and 31 ng/mL respectively, with relative standard deviations of less than 33%. No matrix effects were observed. Analysis of 239 fingerprint samples yielded a 99% true-positive rate and a 2.5% false-positive rate, based on the detection of cocaine, benzoylecgonine, or methylecgonine with use of a single fingerprint.

CONCLUSIONS: The method offers a qualitative and noninvasive screening test for cocaine use. The analysis method developed is rapid (4 min/sample) and requires no sample preparation.