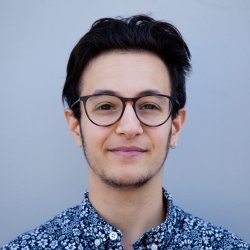 I am a British Academy Newton International Fellow in the Surrey Morphology Group (SMG), a research centre based in the School of Literature & Languages. Before joining Surrey in February 2012, I was a post-doctoral researcher at the Department of Linguistic and Cultural Evolution (DLCE), of the Max Planck Institutes in Jena and Leipzig. I did my PhD in the Laboratoire de Linguistique Formelle (LLF) of the University of Paris.

My research in computational linguistics focuses on language evolution and typology. The title of my current project is: Solving the word puzzle: morphological analysis beyond stem and affixes. I see computational tools as an opportunity to systematize linguistic analyses, a solution to study precisely large amounts of data, and a necessary methodological step towards typological investigation.

Before joining the SMG, I was a post-doctoral researcher at the DLCE (MPG EVA), where I worked on inflectional lexicons, evolutionary models of inflectional paradigms and sound correspondence. During my PhD, I studied the typological  variation of inflection classes (declensions or conjugations) using  computational methods.

Solving the word puzzle: morphological analysis beyond stem and affixes

In the few milliseconds necessary for speakers to say a word and for listeners to understand it, they both make several elaborate deductions. The internal structure of words can be a crucial source of information for these deductions, particularly when words have multiple grammatical forms, a process known as inflection. Across languages, the nature and number of contrasts expressed through inflection can vary greatly. While a language such as English has only a handful of grammatical distinctions, some languages can have up to thousands. Moreover, these distinctions can be manifested by diverse intricate sound contrasts. For example, the verbal system of English would be simple if all verbs conformed to the pattern of jump~jumped, which can be neatly segmented into a stem (jump) and affixes (-ed). But across languages, many words behave more like the pair think~thought which resist segmentation. In many languages, layers of regularity and idiosyncrasy further complicate the matter. Understanding the puzzling complexity of inflection is essential to explain the structure and evolution of the world's languages. Yet, linguistics still lacks a consistent, predictable methodology to study inflection.

Current studies in this area have two main – but related – shortcomings. First, they often start from pre-analysed paradigms, where forms have been segmented by hand into stems (removed from the data) and affixes. These affixal tables are not commensurate across languages. Second, studies focus on assessing how difficult it is for speakers to predict forms for a given meaning, and ignore the parallel problem of deducing the grammatical meaning of a given form. This question is key to automating word structure analysis.

the project remedies both by providing data, developing computational tools to analyse inflected words, and studying the organisation of inflectional exponence. We work on gathering, digitising, and standardising inflectional lexicons, coordinating with the international morphology community to spread the use of common standards and ensure interoperability. To solve the long standing Segmentation Problem, we write computational tools which focus on characterizing gradient information in words. Finally, our goal is to build a quantitative typology of inflected word structure.

A full list of my publications is available on my personal site.