In-depth analysis of the behaviour of the massless modes in the conformal limit of the AdS_3/CFT_2 scattering problems and the relation with the thermodynamic Bethe Ansatz.

In recent years, stemming from the study of a particular class of integrable systems, new remarkable mathematical structures have been discovered. These exotic algebraic constructions extend the standard framework of quantum groups to situations where novel unexpected phenomena are seen to emerge.

Integrable systems have the property that their evolution equations can be exactly solved via the reduction to an auxiliary linear problem. When these systems are combined with Lie superalgebras - that is, Lie algebras for which there exists a notion of even (commuting) and odd (anti-commuting) generators - new exciting facts occur.

The so-called Hopf algebra describing multiple (tensorial) products of these algebras, for instance, acquires non-trivial deformations, whose consequences have not yet been fully understood. The aim of this research project is to understand such exotic structures and to use this new understanding to attack challenging problems at the interface between mathematical physics and these contiguous areas.

One such problem is the so-called non-ultralocality of Poisson structures, governing the formulation of integrable systems in their semi-classical approximation. Non-ultralocality makes the algebraic interpretation of the solution to these systems dramatically more obscure, and it is a difficult problem which has challenged mathematicians for years. We believe that the key to significant progress in this direction is a rigorous understanding of the underlying exotic algebras which are the object of study of this project.

We plan to attack the problem by constructing a diverse set of "representations" which explicitly realise the action of these exotic algebras; especially important will be what we call the "massless" ones. These are special representations occurring when the parameters satisfy very particular relations and have recently been found to play a crucial role in the associated spectral analysis.

This will be combined with the development of new techniques to treat quantum superalgebras and the so-called Bethe ansatz. From this work, we plan to derive new results on quantum groups and apply them to the problem of non-ultralocality in integrable systems. The intradisciplinary character of the project, combining ideas and techniques from different areas of mathematics, will lead to new results across a broad range of topics, from group theory to geometry (Hamiltonian structures), topology (knot invariants, Grassmannian manifolds) and combinatorics (Bethe equations, Baxter operators and Yangians).

This is a joint proposal with Trinity College Dublin (Dublin PI: Dr Marius de Leeuw), who received a correspondent amount from SFI. EPSRC funds one postdoc at Surrey (Dr Juan Miguel Nieto Garcia) – while Trinity has a corresponding postdoc funded from their part by SFI (Dr Ana Lucia Retore). 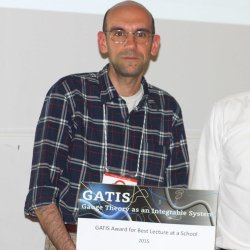 Four preprints have recently been posted on the archive as part of the grants’ activities – awaiting referee’s responses from journals.