A celebration of women in astronomy

In the first of two Adams-Sweeting lectures in 2019, renowned astrophysicist Dame Jocelyn Bell Burnell took us on a celebratory journey through the careers of some well-known female astronomers. 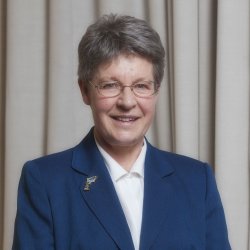 Jocelyn Bell Burnell is an astrophysicist, best known for her discovery of pulsars — rotating neutron stars that appear to ‘pulse’ since the beam of light they emit can only be seen when it faces the Earth. Her observation, made together with her supervisor, Antony Hewish, is considered to be one of the greatest astronomical discoveries of the twentieth century.

In 1967, Jocelyn made her discovery using a telescope that she and Antony had originally built to study the recently detected star-like quasars. She noted a signal that pulsed once every second — ‘Little Green Man 1’ — that was later determined to be a pulsar.

Jocelyn has since become a role model for young students and female scientists throughout the world. She was appointed to CBE for services to astronomy in 1999, followed by a DBE in 2007. Her story was featured in the BBC Four’s Beautiful Minds, and BBC Two’s Horizon documented her discovery of ‘Little Green Man 1’.

When trying to understand women’s progress, or lack of progress, in research and academia, society is often quick to blame women themselves, particularly when it comes to male-dominated subjects like astronomy. However, data studies have shown how culture and history may have had an influence.

Renowned astrophysicist Dame Jocelyn Bell Burnell took us on a celebratory journey through the careers of some well-known female astronomers, exploring the lives and discoveries of these pioneering women, before moving on to review the position of women in physics and astronomy today powered by the latest global statistics surrounding astronomy’s gender gap.

From why there’s a shortage of women in these fields, to how we can use this information to move forward, Dame Jocelyn shed light on the challenges of today’s perception of female scientists both in academia and in wider society.

Jim Al-Khalili is a well-known science communicator, author and broadcaster. He has written eleven popular science books, between them translated into 26 languages. He is a regular presenter of TV science documentaries, including the Bafta nominated BBC series, Chemistry: A Volatile History. But he is probably best known as presenter of the weekly BBC Radio 4 programme, The Life Scientific.

Other Adams Sweeting lectures in the series include Science as Revolution with Sir Paul Nurse.