HARMERGEDDON is Nathan Greywater and Polyphoniefae, Dungeness based a/v performance art duo formed in South London in the autumn of 2010.

Their live show blends sound and light in a feedback loop using photophonics (sound carried on light beams), electro magnetic fields and consumer electronic junk, taking Industrial from its scrap metal past to the electronic fallout of late capitalism with a basis in improvisation and psychedelia. The result verges on sensory overload.

Since their inception they have played internationally in venues as diverse as a cave (Grobbia Artist Residency 2017, Italy), a forest (Ambiosonic 2016, France), a moving train (Resting Place, Platform-7 & Dawn Cole) and the legendary MS Stubnitz. They played Splice Festival 2018, streamed live to Montreal for Sight & Sound 2016 and Winnipeg for the Winnipeg Underground Film Festival 2017 (in collaboration with Guillaume Vallée). Recently they supported This Is Not This Heat for their ultimate European Shows at The Albany, Deptford.

In addition to their live show they have also provided live visuals for Ben Vince, Lia Mice, Merkaba Macabre, A’Bear and Dronica Festival. They have shot and edited music videos for the bands Warren Schoenbright and Lofe and are currently running residencies as ‘Welfare Unit’ from their base by the Dungeness coast. 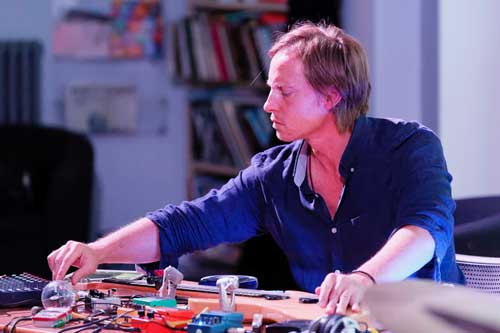 Bill Thompson is a sound artist and composer. He performs as a soloist and with a number of others including zerospace, Phil Durrant, Phil Maguire, Airfield with choreographer Ian Spink, and in the past with Keith Rowe, Faust, EXAUDI and others.

He has earned numerous awards and commissions including the PRS for New Music ATOM award, the GAVAA visual arts award, a PRS for New Music Three Festival commission, the 2010 Aberdeen Visual Arts Award, and was nominated for the Paul Hamlyn Award in 2012.

Richard Sanderson is an experimental and improvising musician based in London, originally from Middlesbrough in he North East of England. His instrument of choice is the melodeon (diatonic button accordion) although he also plays electronics, toys, guitar and organ. He has recorded with the bands Lost Robots, Minnow and Ticklish and in duos with Steve Beresford and Mark Spybey. His solo album "Improvisations for Melodeon"  was released in 2011. He plays in Browne/Thompson/Sanderson, The Horse Trio and dances with Blackheath Morris Men. Very occasionally he re-activates his late 70's post-punk band Drop. He appears on the Linear Obsessional releases ,  "Bottles" and "Corks" (with Clive Pearman), "Tone Chambers" with skitter, "Berlin Toy Bazaar" with Steve Beresford and Anna Homler, and the solo releases "Precision" (an EP), "Air Buttons" and "A Thousand Concreted Perils" He also runs Linear Obsessional Recordings.

DIG is an ensemble featuring students from the Creative Music Technology course at the University of Surrey. The ensemble explores creative live electronic approaches to non-idiomatic improvisation and performance. This year DIG features Marcus Bagshawe, Ben Hodgson and Scott Tatsuta, who in addition to their independent music activities, have performed together at London’s Hundred Years Gallery at a 2 day festival event in 2019.