Equality, diversity and inclusion in engineering and physical sciences

Our Faculty is committed to creating and maintaining a work and study environment in which all our staff and students feel a sense of connectedness and belonging. We are dedicated to championing equality, diversity and inclusion (EDI) and building a culture where these values are fully embedded.

We believe in equal opportunity and a fairer future for all, and we nurture and support talent in both students and staff, irrespective of race, age, gender, sexual orientation or disability. The Faculty supports and promotes the University’s EDI strategy which aims to:

Everyone should be able to make a full contribution to society in their own unique way and live in a world which demonstrates respect and values EDI.

Working towards and promoting EDI

Athena SWAN is a global initiative run by Advance HE which aims to support and transform gender equality within higher education and research. Athena SWAN awards are given to institutions and departments/schools to recognise their commitment to advancing women’s careers in science, technology, engineering, mathematics and medicine.

We are proud that, to date, Bronze awards have been awarded within our schools as follows:

Our Physics department is a member of the Institute of Physics equality and diversity initiative Project Juno, which recognises physics departments that promote gender equality at all levels and foster a more inclusive working environment.

The department has been awarded the prestigious Juno Champion status, receiving commendation for initiatives such as using feedback from the staff survey to inform the promotion process and introducing new, mandatory EDI training for undergraduates.

Learn about other University-wide accreditations, awards and schemes. 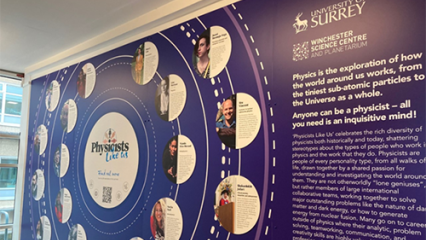 Our physics diversity wall celebrates the rich diversity of physicists both historically and today, and aims to shatter stereotypes about the types of people who work in physics and the work that they do.

Find out more about our Physics Diversity Wall.

The University of Surrey’s Women in Engineering Society (WES) aims to provide social, educational and networking opportunities for everyone who wants to see more women involved with engineering and science, technology, engineering, and mathematics (STEM) subjects.

It is affiliated with the Women’s Engineering Society which is a charity and professional network of women who offer inspiration, support and development to its members.

The working group aims to provide a space for women in engineering at the University to connect and grow together and to stimulate women to achieve their full potential in their careers.

If you would like to get involved, please email Dr Tan Sui (t.sui@surrey.ac.uk).

Working towards and championing EDI, our students have:

Acted in roles of responsibility

Our school EDI groups, which bring together a diverse mix of staff and students, discuss ways in which our EDI approach can be improved. These ideas are reported to the Faculty EDI Committee that sets related strategy and policy.

Staff and students are provided with bespoke EDI training modules including ‘An Introduction to Race Equity’, ‘Diversity at Work’, and ‘Unconscious Bias’.

We mark coursework and exams anonymously, where possible, and ensure questions and materials are accessible for all students irrespective of background or disability.

As part of a new initiative called Diversity 200, job adverts are explicitly checked to ensure that they are gender neutral and that they include a statement on our EDI values. Job shortlists are monitored for diversity.

We strive for equal opportunity of career development by allocating teaching and administrative work fairly, as highlighted in the Athena SWAN initiative.

All key faculty meetings are scheduled in core hours and staff can work from home as part of the University’s new blended working policy, which provides flexible hours for all types of caring responsibilities and commitments.

We strive to consider EDI in the timetabling of lectures and classes where possible.

The University has an anonymous reporting system for EDI incidents (Report and Support).

We conduct yearly staff and student EDI surveys to inform an EDI action plan that continues our missions of equality, diversity and inclusion.

In May each year, final year students are invited to nominate either themselves or another student for the EDI Award which is presented at Graduation. A monetary prize is awarded to the student who has made the most significant contribution to enhancing or supporting equality, diversity and inclusion.

This may include, but is not restricted to:

One previous winner, as one of the only Black, Asian and Minority Ethnic Peer Support mentors, increased visibility of Student Support services to other BAME students. They were also involved in several other mentoring schemes across the University during their time at Surrey, winning the Learning Through Experience Certificate and the Student Life Mentoring Award. They advocated for further student life mentoring services and acted as Wellbeing and Inclusion Officer for the Pakistani Society.

Each of our schools have an EDI group where staff and students come together to discuss issues and ideas relating to EDI.

The groups meet regularly and report into the Faculty EDI Committee which sets related strategy and policy.

We believe that everyone has a responsibility to champion EDI in the Faculty and across the University but if you are interested in starting an initiative or getting involved in our EDI groups, the Faculty would love to hear from you.

EDI representatives encourage feedback from others, communicate others’ experiences and report back any changes that this feedback effects.

If you are interested in being a student EDI representative, please email fepsedi@surrey.ac.uk.

Head of School of Sustainability, Civil and Environmental Engineering

Head of School of Chemistry and Chemical Engineering

Head of School of Mathematics and Physics

Head of School of Computer Science and Electronic Engineering