Will the airline industry ever steer away from gender conformity?

Female flight attendants are still pressurised to ‘look the part’, according to new research led by the University of Surrey. 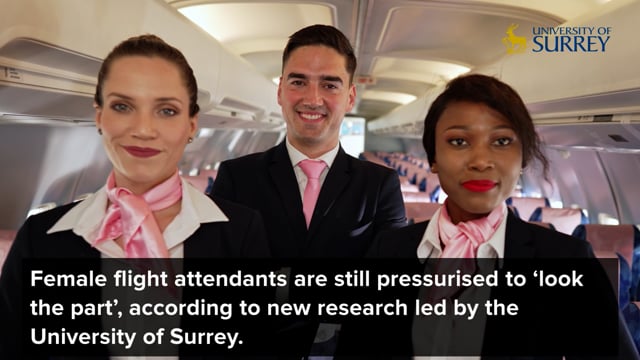 Despite attempts by the airline industry to cultivate more diverse working environments, researchers from Surrey have found that gendered practices and pressures still persist – with female cabin crew encountering precise expectations on appearance that are not extended to their male counterparts.

Whitney Smith, lead author of the study from the University of Surrey, said:

Researchers conducted interviews with currently and recently employed flight attendants from Virgin Atlantic, Qantas and Emirates airlines to examine how they attempt to construct the ideal aesthetic for flight attendants.

This gendered criterion is also enforced through a combination of self-policing and peer pressure, which often results in colleagues naming and shaming people they feel do not keep up with appearance standards.

Scott Cohen, Professor of Tourism and Transport and co-author of the study from the University of Surrey, said:

“Our research clearly shows that airlines often demand additional aesthetic performances – a certain look - from women. These expectations are not extended to male employees.

“We would have hoped that companies would provide more diverse environments in this day and age, but it’s obvious there is still a long way to go.”

In an attempt to adapt to broader societal developments, British Airways recently released a statement saying they would allow male flight attendants to wear ‘natural’ makeup, nail polish, accessories and ‘man buns’, as part of their new uniform policy. In 2019, Virgin Atlantic also made significant changes regarding gendered grooming standards by removing its long-standing makeup requirement, as well as offering trousers as an additional component of the female flight attendant uniform.

The study has been published in ScienceDirect.

Professor of Tourism and Transport, School Director of Research