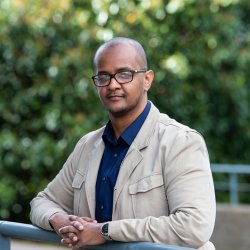 Institute for Communication Systems, Department of Electrical and Electronic Engineering, Faculty of Engineering and Physical Sciences.

Dr. Abdelrahim Mohamed received the B.Sc. degree (first class) in Electrical and Electronics Engineering from the University of Khartoum, Sudan, in 2011, the M.Sc. degree (distinction) in Mobile and Satellite Communications from the University of Surrey, U.K. in 2013, and the Ph.D. degree in Electronics Engineering from the University of Surrey, U.K. in 2016. He secured the first place in the Electrical and Electronic Engineering Department of the University of Surrey, U.K., during his M.Sc. studies. In addition, he is awarded the Sentinels of Science 2016 Award. He is currently a Postdoctoral Research Fellow at the Institute for Communication Systems (ICS), University of Surrey, U.K. He is currently involved in the System Architecture and Co-existence work area, and the New Physical Layer work area in the 5G Innovation Centre at Surrey. He is the developer of the 5G New Radio System Level Simulator. His research contributed to the QSON project, the FP7 CoRaSat project, the EPSRC Stepping Towards the Industrial 6th Sense project, the DCMS 5G Planning Tool, and the Energy Proportional eNodeB for LTE-Advanced and Beyond project. His main areas of research interest include radio access networks with control/data plane separation, energy efficiency, mobility management, and cognitive radio. He is endorsed by the Royal Academy of Engineering and the Home Office as an Exceptional Talent/Promise.

Main developer of the C++ 3GPP-compliant simulators to provide a benchmark implementation for the standard in parallel to being used as a testing and evaluation tool. Calibrated against 3GPP results and other commercial and non-commercial simulators.

Energy Proportional eNodeB for LTE-Advanced and Beyond

Stepping Towards the Industrial Sixth Sense