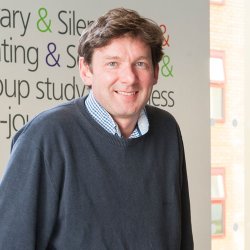 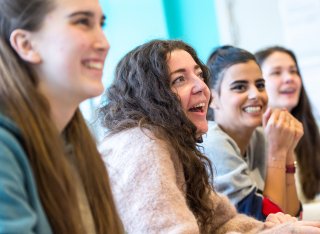 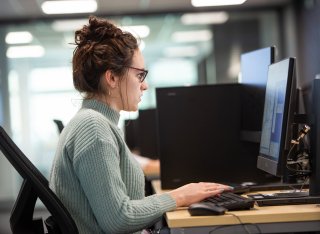 5 reasons to study for a masters in psychology at Surrey

I am interested in understanding how people think, such as how people reason and make decisions, and in using this knowledge to improve their thinking. Currently I am investigating the cognitive mechanisms underpinning dual process theories of cognition. I uncover these mechanisms using behavioural and electrophysiological methods and explore them further with computational models. For example, some recent findings have shown these cognitive mechanisms operate in parallel based on a process in which the most relevant, rather than the most logical, conclusions are more likely to be retained during reasoning.

This research has practical importance, as understanding thinking suggests methods to improve it. Some recent projects include: work to improve military decision making under stress through eliciting expert fast and frugal heuristics and training novices to apply them. Within the CLYMBOL project we investigated how consumers' reasoning about health claims is determined by their network of causal beliefs about food and health. Within the PD_manager project we are investigating how decisions are made in the management in Parkinson's disease.

Individuals and organisations are now part of a world of work where the only constant is change and this chapter will outline on a practical level how we can understand the world of work from the individual?s perspective.

Individuals and organisations are now part of a world of work where the only constant is change and this chapter will outline on a practical level how we can understand the world of work from the organization's perspective.

Objective: Health claims on food packaging are regulated to inform and protect consumers, however many consumers do not accurately interpret the meaning of the claims. Whilst research has shown different types of misinterpretation, it is not clear how those interpretations are formed. The aim of this study is to elicit the causal beliefs and causal models about food and health held by consumers, i.e. their understanding of the causal relationships between nutrients, health outcomes and the causal pathways connecting them, and investigate how well this knowledge explains the variation in inferences they draw about health benefits from health claims.

Method: 400 participants from Germany, the Netherlands, Spain, Slovenia, and the UK were presented with 7 authorised health claims and drew inferences about the health benefits of consuming nutrients specified in the claim. Then their personal causal models of health were elicited along with their belief in the truth and familiarity with the claims.

Results: The strength of inferences about health benefits that participants drew from the claims were predicted independently by the strength of the relevant causal pathways within the causal model, and belief in the truth of the claim, but not familiarity with the claim. Participants drew inferences about overall health benefits of the nutrients by extrapolating from their causal models of health.

Conclusion: Consumers? interpretation of claims is associated with their belief in the claim and their causal models of health. This prior knowledge is used to interpret the claim and draw inferences about overall health benefits that go beyond the information in the claim. Therefore efforts to improve consumers? understanding and interpretation of health claims must address both their wider causal models of health and their knowledge of specific claims.

Kennedy William G., van Vugt Marieke K., Banks Adrian P. (2018) Editors? Introduction: Cognitive Modeling at ICCM: Advancing the State of the Art, Topics in Cognitive Science 10 (1) pp. 140-143 Wiley
DOI: 10.1111/tops.12321
Cognitive modeling is the effort to understand the mind by implementing theories of the mind in computer code, producing measures comparable to human behavior and mental activity. The community of cognitive modelers has traditionally met twice every 3 years at the International Conference on Cognitive Modeling (ICCM). In this special issue of topiCS, we present the best papers from the ICCM meeting. (The full proceedings are available on the ICCM website.) These best papers represent advances in the state of the art in cognitive modeling. Since ICCM was for the first time also held jointly with the Society for Mathematical Psychology, we use this preface to also reflect on the similarities and differences between mathematical psychology and cognitive modeling.
Gore J, Banks Adrian, McDowall A (2018) Developing Cognitive Task Analysis and the importance of Socio-cognitive competence/insight for Professional Practice, Cognition, Technology and Work. Special Issue:Naturalistic Decision Making: Navigating Uncertainty in Complex Sociotechnical Work 20 (4) pp. 555-563 Springer Verlag
DOI: 10.1007/s10111-018-0502-2
Accelerating the cognitive expertise of professionals is a critical challenge for many organizations. This paper reports a collaborative, longitudinal, academic practitioner project which aimed to elicit, document and accelerate the cognitive expertise of engineering professionals working with the manufacture and management of petroleum additives. 25 engineering experts were trained by three academic psychologists to use applied cognitive task analysis (ACTA) interview techniques in order to document the cognition of their expert peers. Results had high face validity for practitioners who elicited hot/sensory based cognition, a number of perceptual skills and mental models, highlighting undocumented context specific expertise. We conclude from a peer review of findings, combined with experienced CTA analysts that ACTA techniques can be advanced in context by the explicit recognition and development of socio-cognitive competence /insight.
Leather Carol Alexandra (2018) Exploring the relationship between aspects of cognitive and meta-cognitive function and the workplace success of dyslexic people.,
DOI: 10.15126/thesis.00848839
Objective: To explore how cognitive and metacognitive function influences workplace success in dyslexic adults.

Background: Prior research suggests that dyslexic adults experience difficulties with executive functioning and developing metacognitive skill, in addition to continuing problems with literacy. This thesis proposes that these difficulties may affect their performance at work. This research therefore aims to investigate these aspects of cognitive and metacognitive function to discover how they relate to workplace success. These findings will provide evidence to inform interventions for dyslexic adults in the workplace.

Conclusion: Dyslexic participants attained comparable levels of workplace success despite deficits in working memory processes and self-understanding, and weaker literacy skills. However similar workplace success could not be attributed to compensatory use of metacognitive skills by dyslexics because dyslexics did not have greater metacognitive skill. Possible explanations and recommendations for further research are discussed.

Banks Adrian, Gamblin David, Hutchinson Heather (2020) Training Fast and Frugal Heuristics in Military Decision Making, Applied Cognitive Psychology Wiley
Fast and frugal heuristics have been used to model decision making in applied domains very effectively, suggesting that they could be used to improve applied decision making. We developed a fast and frugal heuristic for infantry decisions using experts from the British Army. This was able to predict around 80% of their decisions using three cues. Next, we examined the benefits of learning to use the fast and frugal heuristic by training junior officers in the British Army to apply the heuristic and assessing their accuracy and mental workload when making decisions. Their performance was compared to a control condition of junior officers who applied standard military decision methods. Participants using the fast and frugal heuristic made decisions as accurately as participants in the control condition, but with reduced mental demand. This demonstrates that fast and frugal heuristics can be learnt, and are as effective as analytic decision methods.
Uther Maria, Banks Adrian P. (2018) User Perceptions of Sound Quality: Implications for the Design and Use of Audio-Based Mobile Applications, International Journal of Human?Computer Interaction 35 (15) pp. 1-8 Taylor & Francis
DOI: 10.1080/10447318.2018.1532195
This study sought to investigate the effect that contextual cues (in particular, device type and content type) have on the perception of sound quality. A sample of 49 participants were tested on different mobile devices sizes (small ? iPhone, medium ? iPad Mini, and large ? iPad) which had identical sound output characteristics within in different usage contexts (generic content vs. musical training app contexts). Results showed that the users? perception of generic sound types was affected by device type, with iPhones appearing to have better sound quality compared to larger devices. On the other hand, within application contexts, the application type seemed to affect user perceptions more, with the rhythm training application rating poorer on sound quality, picture quality, and likelihood of future use as compared to the pitch training application (although this may be due to the perceived increased difficulty). Together, these findings demonstrate the influence of device and content cues (when actual physical qualities are controlled) on user sound perception. Interestingly, differences in perceived sound quality was not accompanied by an overriding preference for that device as compared to other devices. Instead, considerations such as ease of use seemed to drive considerations for uptake of applications.
Husted Margaret, Seiss Ellen, Banks Adrian P. (2019) The relationship between dietary restraint and deficits in reasoning about causes of obesity, Psychology & Health 34 (12) pp. 1504-1522 Taylor & Francis (Routledge)
DOI: 10.1080/08870446.2019.1623890

Objective: Increased levels of dietary restraint are associated with deficits on many cognitive tasks. Less is known about how individual differences in restraint influences complex cognition such as reasoning which is the focus of this research.

Conclusion: The novel findings show that individual differences in dietary restraint have a wider relationship with cognition than previously demonstrated. Results tentatively support theoretical explanations of a reduction in cognitive capacity, rather than differences in belief, explaining reasoning deficits. These findings open an interesting avenue for research and might have implications for effective decision making about personal health behaviours, such as food choice.