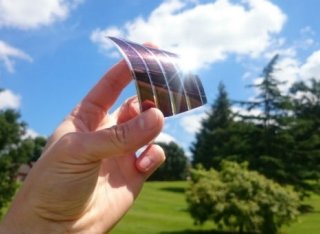 Rajapakshe Mudiyanselage Indrachapa B. (2019) Inorganic organic hybrid Pb-Sn mixed perovskites for photovoltaics,
DOI: 10.15126/thesis.00853279
Inorganic-organic hybrid metal halide perovskites have shown great promise in realising high performing photovoltaic devices with low fabrication cost. In this regard, Pb-Sn mixed perovskites are considered as highly suitable candidate for all perovskite tandem solar cells and single junction solar cells with narrow bandgaps. However, the maximum achievable performances of Pb-Sn mixed perovskite solar cells (PSCs) are not yet obtained due to the lack of understanding of the material system as well prevailing issues due to unintentional doping as a result of Sn oxidation. In this thesis, the optimisation of a triple cation Pb-Sn mixed perovskite with a formula Cs0.05(FA0.83MA0.17)0.95Pb0.5Sn0.5I3 was investigated. Firstly, the effect of the ?anti-solvent? on Pb-Sn mixed perovskites (fabricated through the commonly used anti-solvent dripping method) was investigated and compared to a Pb-only triple cation perovskite analogue, in terms of its effect on the film morphology, crystallisation dynamics and molecular interactions in the films. Secondly, the need for careful selection of anti-solvents for Sn-incorporated PSCs, compared to their Pb-based counterparts is elaborated. This is investigated using Pb-Sn mixed perovskite devices of an inverted architecture, with a device stack of ITO/PEDOT:PSS/Perovskite/PC60BM/ZnO/BCP/Ag. The above studies, in combination with the film processing conditions used is identified to enable the removal of unwanted Sn4+ dopants, through engineering the anti-solvent method for Pb-Sn mixed perovskites. Optimisation of the anti-solvent engineering process enables an 80% enhancement in efficiency when toluene is used as the antisolvent, in comparison to the other anti-solvents tested in this work. The champion power conversion efficiency of 11.6% achieved through this is further improved to 12.04% following optimised anti-solvent wash and thermal treatment. This is attributed to the complete removal of Sn4+ dopants following the optimisation process. Following the optimisation of the Pb-Sn mixed perovskite film preparation, a surface post-treatment method is developed based on guanidinium bromide which enables the efficiency to be improved even further to 14.4%. The surface post-treatment especially allows device fill factors of 83%, the highest reported for Pb-Sn mixed PSCs reported so far, approaching the Shockley-Queisser limit for fill factors in Pb-Sn perovskites. This work highlights the importance of careful selection of anti-solvents and post treatments on Pb-Sn mixed perovskite absorber layers, in managing defects and reducing non-radiative recombination for high efficiency low bandgap perovskite materials, and also enables further improvements in device efficiency for all-perovskite tandem solar cells.