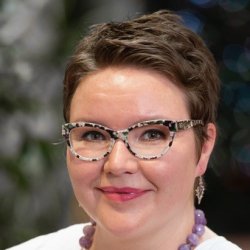 Faculty of Arts and Social Sciences, School of Literature and Languages.

I am a British Academy Postdoctoral Fellow in Surrey Morphology Group (SMG), a research centre at the School of Literature & Languages. I am working on morpho-syntactic micro-variation and its relation with mutual intelligibility between three Turkic languages of Central Asia – Kazakh, Uzbek, Karakalpak within the British Academy funded project Morpho-syntax of mutual intelligibility in the Turkic languages of Central Asia.

Christopher, N. (2021). (in press) Differential Object Marking in Kazakh – the Dynamic Syntax Approach. Journal of Logic, Language and Information (Special issue: Dynamic Syntax).
Christopher, N. (2020). Kazakh particle ğoj as an existential operator. In: Modicom, P.-Y., Duplâtre, O. (eds.), Information Structural Perspectives on Discourse Particles. Amsterdam: John Benjamins Publishing.
View abstract View full publication
This paper is devoted to the Kazakh particle , its syntactic distribution, pragmatic contribution and semantics. Two syntactically distinct types of  are distinguished: a post-nominal copula-type  and a post-predicative particle . The speaker using either particle in her utterance indicates to her hearer that (some of) the information she provides has been previously shared, or should be treated as such. In post-predicative position,  is never obligatory and can follow any type of predicate – verbal or nominal – as long as it is either narrowly focused, or is a part of a wider focus phrase. Both types of  contribute similar pragmatic effects of contrastivity and givenness (or pragmatic presupposition). Especially, the proposition  followed by post-predicative  is assumed to belong to the Common Ground, whether it had been explicitly added there during the preceding exchange or not. Drawing on the comparison with Russian  and Tundra Yukaghir particle ()=, it is shown that  should be treated as an existential operator stating the existence of  inside of the Common Ground.
ğojğojğojğojğojğojpğojžemərğojp
Christopher, N. (2017). The “bagel problem” in Russian – The Dynamic Syntax approach. In: Bloch-Rozmej, A. & Bondaruk, A. (eds.), Constraints on Structure and Derivation in Syntax, Phonology and Morphology. Frankfurt Am Main & New York: Peter Lang.
View abstract View full publication
This paper examines the complementary distribution pattern of two types of Russian indefinite pronouns: ni- and libo-words. These indefinite pronouns are restricted to non-veridical contexts, which makes them negative polarity items. Within these non-veridical contexts, libo-items have a much wider distribution than ni-words, as the former can appear in all non-veridical contexts, apart from those with predicate sentential negation, to which the latter are confined. This distribution pattern was referred to as the “Bagel Problem” by Pereltsvaig (2006). This paper proposes a new approach to the “Bagel Problem” from the point of view of the theoretical framework of Dynamic Syntax. It is concluded that both ni- and libo-items are: a) highly sensitive to the immediate context in which they appear; and b) interact with the context in different ways, namely, ni-items either make or keep a clause negative, while libo-items require to be parsed in non-veridical contexts except clausemate sentential negation ones. This difference in the behaviour of ni- and libo-items is formally represented in their Dynamic Syntax lexical entries.
Christopher, N. (2017). Kazakh Folk Tales. The SOAS Journal of Postgraduate Research, Volume 9 (2015-16).
View full publication