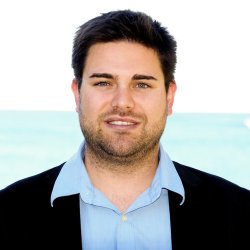 Department of Chemistry, Faculty of Engineering and Physical Sciences.

Peter Roth studied chemistry at the University of Mainz (Germany), the University of Massachusetts (USA) and Seoul National University (South Korea) and obtained his PhD from Mainz in 2009. Jointly supervised by Prof. Rudolf Zentel and Prof. Patrick Theato, his PhD thesis dealt with the orthogonal end group modification of RAFT polymers.After completing a pre-diploma in psychology at the University of Mainz, Peter moved to Sydney for a postdoc at the Centre for Advanced Macromolecular Design (CAMD) at the University of New South Wales (UNSW) working with Prof. Tom Davis and Prof. Andrew Lowe.Peter was awarded a Discovery Early Career Researcher Award (DECRA) in 2012 and was promoted to senior research associate in 2013. Peter's group in Sydney worked on the development of novel multi-responsive polymers and nanoparticles and exploited multicomponent reactions for the design of reactive polymers.In 2015 Peter moved to Curtin University in Perth (Western Australia) as a lecturer in chemistry to conduct research and teach within the Department of Chemistry and the Nanochemistry Research Institute.Peter returned to Europe in 2016 to join the University of Surrey as a lecturer in organic/polymer chemistry.

Our group are experts in synthesizing polymers and polymer (nano-)materials. We exploit the whole spectrum of organic chemistry to design smart and multi-functional polymers. We have expertise in:

Degradable Polymers
We are working on a novel method to make vinyl polymers degradable. Vinyl polymers contain carbon–carbon backbones that are difficult to cleave chemically. We anticipate that our method can offer pathways for the recycling of vinyl polymers such as polystyrene and can therefore contribute to a circular plastics economy. Additionally, we are working toward exploiting our degradable polymers for advanced anticancer therapies.
Polymer Nanoparticles
Nanoparticles are microscopic (nanometer-sized) pieces of plastic with fascinating properties and application potential ranging from paints to improved therapeutics. Our group is working on advanced methods of preparing such nanoparticles and on making them “smart”, that is to say to teach them to change in properties (i.e. shape and size) depending on their environment.
Polymer Photochemistry
Currently, polymer synthesis relies on (more or less efficient) organic reactions that are used to link building blocks (called monomers) together and modify pre-made polymers. However, the required functional building blocks can be difficult or costly to obtain and modern polymer chemistry is not always able to conveniently produce desirable materials. We are exploring light-induced and other catalysed reactions that do not require functional building blocks. We expect that this “universal” chemistry will open simple routes toward multi-functional materials.