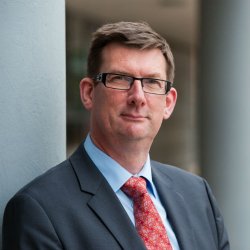 Vince Emery is an Emeritus Professor of Translational Virology at the University of Surrey, where he was formally Vice-President (Global). As Vice-President (Global) Professor Emery led the University of Surrey's global strategy seeking to catalyse and expand international research networks, student and staff recruitment and mobility, to foster teaching collaborations, and to realise transnational educational opportunities.

Before joining the University of Surrey in 2012, Professor Emery was Pro-Provost for Africa and the Middle East, Vice-Head of the Graduate School and Professor of Virology at UCL where he still holds an Honorary Professorship.

Vince started his scientific career as a biochemist but has been a virologist for the last 32 years. His current research aims to provide an interdisciplinary approach to understanding viral infections in immunocompromised hosts such as HIV-infected patients and transplant recipients.

Digital technologies and data privacy in the Covid-19 pandemic

Research uncovers life-saving benefits in the battle against viruses

Surrey jumps 100 places in the THE world rankings

Vince's particular interests have been focused on cytomegalovirus in solid organ and stem cell transplant recipients and in newborns (especially in Africa) by combining viral replication measures with assessment of theimmune response and mathematical biology to improve patientmanagement.

During his career he has obtained in excess of £25 million of grant money from Government agencies in the UK and USA, charitable organisations, and the private sector and has an H-index of  66 and his work has been cited 13,100 times.

Protecting patients and populations from the threat of infectious diseases

Globally, infectious diseases such as influenza, MRSA and HIV rank among the gravest threats to human health, alongside global warming and terrorism.

i-sense is a five-year, £11m EPSRC-funded interdisciplinary programme, launched in October 2013. It aims to engineer a new generation of early-warning sensing systems to identify disease outbreaks much earlier than before, using self-reported symptoms on the web and mobile phone-connected diagnostic tests.

i-sense’s mobile phone-connected diagnostic devices will help widen access to testing in GP surgeries, the community, the developing world and the home. The capability to detect infections and then wirelessly connect test results to healthcare systems will help patients gain faster access to treatment, and support public health efforts to map indicators of emerging infections in real-time.

Researchers are also using the vast amount of web-based information on Google, Facebook and Twitter- self-reported symptoms such as “cough” or “fever”- to identify indicators of disease outbreaks, before people attend clinics, or from geographical regions that are not covered by traditional public health systems.

Outbreaks of infectious disease can spread rapidly and unpredictably, causing enormous losses to health and livelihood. Worldwide, many infections remain undiagnosed and untreated due to poor diagnostic tools. This results in the on-going transmission of serious infections, such as HIV, and delay in the identification of emerging threats, for example pandemic influenza.

The best approach to control an outbreak is to identify the source of infection, stop it spreading at an early stage, or prevent it altogether. Therefore, early detection and vigilant monitoring is crucial.

i-sense is led by University College London and brings together a team of scientists, engineers and clinicians from five leading universities - UCL, Imperial College London, Newcastle University, London School of Hygiene and Tropical Medicine and University of Surrey, jointly with Public Health England and industrial and clinical partners.

Background Cytomegalovirus (CMV) is the most prevalent congenital infection in developed countries. A significant number of infected infants develop long-term neurodevelopmental and hearing impairment irrespective of whether disease is detectable at birth. Studies of viral load and replication dynamics have informed the treatment of CMV in adult populations but no similar data exist in neonates. Objectives To study CMV virus kinetics in different body fluids of babies treated for congenital infection. Study design CMV virus load was sequentially analyzed in blood, urine and saliva in 17 babies treated for symptomatic congenital CMV infection. Results Virus was detectable in the urine and saliva of all babies at baseline but in only 15/17 in blood. At the end of 6 weeks of antiviral treatment CMV remained detectable in 9/14 blood samples, 9/12 urine samples and 4/7 salivary swabs. Median half-life (T1/2) of virus decline in blood was 2.4 days (IQR 1.9–3.3) and basic reproductive number (Ro) was 2.3. Although T1/2 values were similar in urine and saliva to those observed in blood, virus dynamics differed both during and after treatment. Conclusions T1/2 and Ro in blood in this group of neonates were similar to values derived from studies of immunocompromised adults. The persistent viremia observed in treated neonates cannot therefore be adequately explained by the virus dynamics early in treatment. The different dynamics exhibited in blood and urine suggests that studying changes in distinct body compartments may assist in further understanding long-term manifestations of disease.

Congenital cytomegalovirus (CMV) remains a leading cause of disability in children. Understanding the pathogenesis of infection from the mother via the placenta to the neonate is crucial if we are to produce new interventions and provide supportive mechanisms to improve the outcome of congenitally infected children. In recent years, some major goals have been achieved, including the diagnosis of primary maternal CMV infection in pregnant women by using the anti-CMV IgG avidity test and the diagnosis and prognosis of foetal CMV infection by using polymerase chain reaction real-time tests to detect and quantify the virus in amniotic fluid. This review summarises recent advances in our understanding and highlights where challenges remain, especially in vaccine development and anti-viral therapy of the pregnant woman and the neonate. Currently, no therapeutic options during pregnancy are available except those undergoing clinical trials, whereas valganciclovir treatment is recommended for congenitally infected neonates with moderately to severely symptomatic disease.

Cytomegalovirus (CMV) remains a cause of disease in individuals with weakened immune systems such as patients undergoing organ transplantation. The mainstay of treatment for CMV is ganciclovir: a CMV-specific drug that looks like a building block of the viral DNA and which requires activation by a protein contained within CMV. Understanding how patients respond to treatment can lead to a better understanding of the basic biology of CMV in the human and also help to optimize treatment regimens. In this study we observed that following treatment of CMV disease in organ transplant patients, CMV viral loads decay according to four distinct patterns. We have developed a novel mathematical model that is able to describe each of these decay patterns. The model could potentially be used to assess how different patients respond to treatment in clinical settings and also to design better drug regimens as per patient. These results have striking implications in terms of how long patients should remain on treatment and provide new insight into CMV infection in the human host.

The development is reported of an ultra-rapid, point-of-care diagnostic device which harnesses surface acoustic wave (SAW) biochips, to detect HIV in a finger prick of blood within 10 seconds (sample-in-result-out). The disposable quartz biochip, based on microelectronic components found in every consumer smartphone, is extremely fast because no complex labelling, amplification or wash steps are needed. A pocket-sized control box reads out the SAW signal and displays results electronically. High analytical sensitivity and specificity are found with model and real patient blood samples. The findings presented here open up the potential of consumer electronics to cut lengthy test waiting times, giving patients on the spot access to potentially life-saving treatment and supporting more timely public health interventions to prevent disease transmission.

Human (Homo sapiens)micro-RNAs (hsa-miRNAs) regulate virus and host-gene translation, but the biological impact in patientswith human cytomegalovirus (hCMV) infection is notwell defined in a clinically relevantmodel. First, we compared hsa-miRNA expression profiles in peripheral blood mononuclear cells from 35 transplant recipients with and without CMV viremia by using a microarray chip covering 847hsa-miRNAs. This approach demonstrated a set of 142 differentially expressed hsamiRNAs. Next, we examined the effect of each of these miRNAs on viral growth by using human fibroblasts (human foreskin fibroblast-1) infected with the hCMV Towne strain, identifyinga subset of proviral andantiviral hsa-miRNAs. miRNA-target prediction software indicated potential binding sites within the hCMV genome (e.g., hCMV-UL52 and -UL100 [UL¼unique long]) and host-genes (e.g., interleukin-1 receptor, IRF1). Luciferaseexpressing plasmid constructs and immunoblotting confirmed several predicted miRNA targets. Finally, we determined the expression of selected proviral and antiviral hsa-miRNAs in 242 transplant recipients with hCMV-viremia. We measured hsa-miRNAs before and after antiviral therapy and correlated hsa-miRNA expression levels to hCMV-replication dynamics. One of six antiviral hsa-miRNAs showed a significant increase during treatment, concurrent with viral decline. In contrast, six of eight proviral hsa-miRNAs showed a decrease during viral decline. Our results indicate that a complex and multitargeted hsa-miRNA response occurs during CMV replication in immunosuppressed patients. This study provides mechanistic insight and potential novel biomarkers for CMV replication.

Objective: To evaluate the impact of highly active antiretroviral therapy (HAART) on CMV transmission and breast milk level in the context of maternal HIV. Design: Specimens from a randomized trial conducted in Nairobi, Kenya between 2003–2005 were used to compare CMV transmission and breast milk levels between mother-infant pairs randomized to HAART versus short-course antenatal zidovudine plus single-dose nevirapine (ZDV/sdNVP) for prevention of mother-to-child HIV transmission (PMTCT). Methods: Fifty-one antiretroviral-naïve women ≤32 weeks gestation, and CD4 between 200–500 cells/mm3 were randomized at 34 weeks to begin either antenatal ZDV/sdNVP, or HAART through 6 months postpartum. Mean breast milk CMV levels and transmission were compared between arms. Results: Age, sociodemographics, CD4%, and HIV plasma RNA viral load were similar between arms at baseline. CMV viral loads were measured from 243 infant plasma and 185 breast milk specimens during the first year postpartum. The probability of infant CMV infection at 12 months was 19% lower in the HAART arm compared to ZDV/sdNVP (75% vs. 94%, p = .04). All women had CMV detected in breast milk, with 72%, 98%, and 97% testing positive during the first, second, and third weeks postpartum, respectively. There was a trend for early higher mean breast milk CMV level in the HAART arm at 1 week (p = .08), and there was significantly slower decline in breast milk CMV levels (area under the curve, p = .01). Conclusions: HAART started during the third trimester may decrease infant CMV infections, by mechanisms independent of breast milk CMV levels. Clinical trials registration: NCT00167674.

This editorial contextualizes the results of Vincenti et al's (page 2945) cytomegalovirus DNA vaccine study in solid organ transplant patients, helping to explain why the vaccine did not reach its primary endpoints and what the data teach for future vaccine studies to control cytomegalovirus posttransplantation.

Background. Cytomegalovirus (CMV) is associated with morbidity and mortality in human immunodeficiency virus (HIV)–exposed infants. We assessed the effect of and relative contribution of breastfeeding to CMV acquisition among infants delivered by HIV-infected mothers. Methods. Between 1993 and 1998 pregnant, HIV-infected women in Nairobi, Kenya, were randomly assigned to breastfeed or formula-feed their infants in an HIV transmission study. Women were allocated equally between treatment arms, and the study was not blinded. The primary endpoint of this nested study was time to infant CMV infection. Results. CMV infection was assessed in 138 breastfed and 134 formula-fed infants. Baseline characteristics were similar between arms. Breastfed infants acquired CMV earlier than formula-fed infants (median age of acquisition, 4.26 vs 9.87 months; P < .001) and had a higher 1-year probability of CMV infection (0.89 vs 0.69; P < .001). Breastfeeding was associated with a 1.6-fold increased risk of infant CMV acquisition independent of infant HIV status (multivariable hazard ratio, 1.61; 95% confidence interval, 1.20–2.16; P = .002). Approximately one third of CMV infections occurred during the peripartum period, with 40% acquired through breastfeeding and the remainder acquired through modes other than breast milk.