Engineering doctorate (EngD) students, or research engineers as they are known, are part of the Centre for Doctoral Training (CDT) in MiNMaT and will spend four years principally with their industrial sponsor, with visits to the University for courses and to use the characterisation facilities.

Some of the key benefits of undertaking an EngD are: 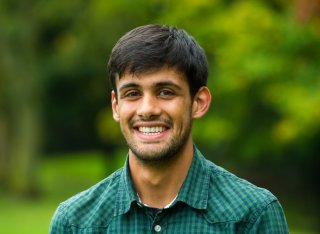 The support I’ve received from my department, my University supervisors and my sponsors at Thames Water Utilities Limited has been excellent. They’ve helped guide my research so that it’s both novel and useful.

The support I’ve received from my department, my University supervisors and my sponsors at Thames Water Utilities Limited has been excellent. They’ve helped guide my research so that it’s both novel and useful.

The overall experience of pursuing an EngD with the University of Surrey has been both incredibly enjoyable and rewarding.

The overall experience of pursuing an EngD with the University of Surrey has been both incredibly enjoyable and rewarding.

I was attracted to the idea of a EngD because I wanted to make use of all the knowledge that I had gained during my undergraduate course and I never wanted to stop learning. So, when a research opportunity opened in the exciting field of quantum technologies I jumped at the chance.

Current manufacturing techniques for quantum technologies are either imprecise or slow and lack the ability to be mass-scaled. My project is focused on the development of a focused ion beam system that will act as a manufacturing tool for quantum devices such as qubit arrays with increased precision, quickly and reproducibly, which will greatly advance the research into quantum technologies

I am part of a SME that focuses on the development of focused ion beam systems. Being part of a small team means I am allowed great responsibility in the roles I am entrusted as part of the development of my instrument. Last year I presented my work at the International School and Symposium on Nanoscale Transport and photonics in Japan.

The Centre for Doctoral training provides a truly fantastic support network. They provide taught short courses in relevant subjects along with management training to develop soft skills. In addition, they provided many opportunities for funding, travel and personal development.

Upon completing our undergraduate degree, we each wanted to get involved in something that could both excel and push the limits of our capabilities. So when we found out about the EngD programme, research that involves an industrial partner, and leadership and management training, it seemed like this was exactly what was needed to propel us forward both academically and industrially. We could learn not only the technical and research skills necessary, but also get the chance to further our personal development, through opportunities to practice our communication skills to a wider audience, via events such as the annual EngD conference.

Our projects are concerned with the residual strength and damage detection of composites used in the military area, after being subjected to repetitive damage. Current protocols require periodic replacements of equipment, regardless of use, unless major damage detrimental to performance is apparent. This approach is necessarily conservative, but is a costly procedure that can result in the replacement of adequate kit. After being given an initial briefing, we each subsequently chose the particular direction of our projects, and were able to work on a topic that interests us. Cerise chose to investigate the effects of damage on the impact properties of the composite, thus potentially increasing the time period between replacements. Scott opted to find and develop a mobile damage detection system, which could result in testing in-field, rather than transporting acceptable equipment.

While doing an EngD in itself is ultimately challenging, because of the persistence it requires when there is a lack of progress being made, our academic supervisors at Surrey, and industrial supervisors at Dstl, have always been supportive and approachable from day one. The CDT staff at MiNMaT have also always been supportive since the day of induction, and were always there when there were concerns raised. We have been extremely lucky to have both supportive supervisory and administrative teams while on our EngD, and the resources and opportunities available to us are there such that we can make the most out of this journey.

Doing doctoral research that has a direct application in industry is something worth considering. Even more when the University of Surrey offers high quality training in different areas of materials science and management skills.

Both our projects look into the development of lightweight crashworthy structures for energy absorbing applications in the automotive industry, through experimental tests and numerical modelling techniques. In particular, one of the projects is focused on investigating the delamination failure mode in composite laminates and skin-core debonding in sandwich panels, whereas the other project looks into the mechanical characterisation of crushable foams and crushing of sandwich structures. The outcome of both investigations are intimately related, since they will provide the necessary information for predicting the behaviour of automotive structures subjected to high speed impacts.

As third-year Research Engineers, thanks to the CDT, we feel that we are already making a contribution to the research community, as we will be able to present our work at international conferences in the near future. Following the CDT philosophy, we are involved in outreach activities to spread our work and encourage young people to pursue a career in STEM subjects.

When I finished my undergraduate degree in materials science from Swansea University, I decided to go into the world of work. But after just a year I decided I wanted a truly immersive and challenging target for myself, so I decided to apply for the EngD at the University of Surrey.

My project is based on using graphene to toughen carbon fibre composites for use on structural components for military aircraft. Graphene, dubbed the miracle material of a generation, is a 2D nanomaterial with extraordinary mechanical and conductive properties. The objective at hand is translating those properties from the nanoscale to the macro scale for components that can be used in service.

Through working with my sponsor company, QinetiQ, I have become part of the wider scientific community through excellent networking opportunities. I have been to multiple events at the National Graphene Institute (NGI) and worked alongside individuals at the National Composites Centre (NCC). Through which I have made a vast number of connections to carry forward in my career.

The University of Surrey has provided me with great opportunities to develop my scientific and professional skills. Such as, presenting multiple poster and oral presentations for both QinetiQ and the University. I have come to relish the ongoing challenges as opportunities to continue developing alongside the next generation of engineers.

If you have any queries or would like to register your interest then please contact the Centre Manager, Noelle Hartley:

If you would like to receive information about projects as they become available, please email our Centre Manager, Noelle Hartley, attaching a copy of your current CV and a covering letter telling us why you are interested in studying for an EngD at Surrey.