As part of the South East Physics Network (SEPnet) diversity day hosted at Surrey on 11 December, Dr Jess Wade – who was recently awarded the British Empire Medal for her public engagement work in Science Technology Engineering and Maths (STEM) – spoke on ‘Why we still need to talk about diversity in science’. 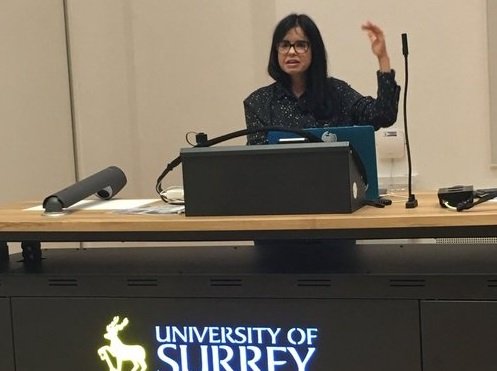 Over 100 members of the public and Surrey staff and students attended the talk, in which Dr Wade spoke about the issues around attracting more women into science. Her talk was introduced by Professor Jim Al-Khalili of the Department of Physics.

The talk was the culmination of the third SEPnet annual diversity day, which saw STEM staff, researchers and diversity champions getting together for a workshop chaired by Professor Averil Macdonald OBE. Delegates were able to learn about the barriers to diversity, hear about recent research and share successful initiatives and best practice. They also took part in group discussions around a series of case studies which helped to identify the key actions by HR staff and others which bring about real change.

Prof. Justin Read, Head of the Department of Physics, said: “The diversity day and evening talk were a fantastic opportunity to come together and discuss the barriers that too often deter bright young minds from going into a career in physics. We came away with a host of new ideas that will help in our commitment to building a diverse and inclusive environment in the Surrey physics Department, ensuring that everyone can benefit from the opportunity of a physics degree.”

Dr Wade, a physicist at Imperial College, has become a leading advocate for women in science, with her work recognised with the award of the Institute of Physics Early Career Physics Communicator Prize, the Jocelyn Bell Burnell Medal and Prize, and the Daphne Jackson Medal and Prize, among many others.

Discover our courses in physics.