An interview with Charis Gantes

Charis Gantes is Professor at the Institute of Steel Structures, National Technical University of Athens (NTUA), and Editor-in-Chief of the Journal of the International Association for Shell and Spatial Structures (IASS). We caught up with him at the 2019 IASS Symposium in Barcelona to talk about the history of spatial structures and what most excites him about the future of this fascinating discipline. 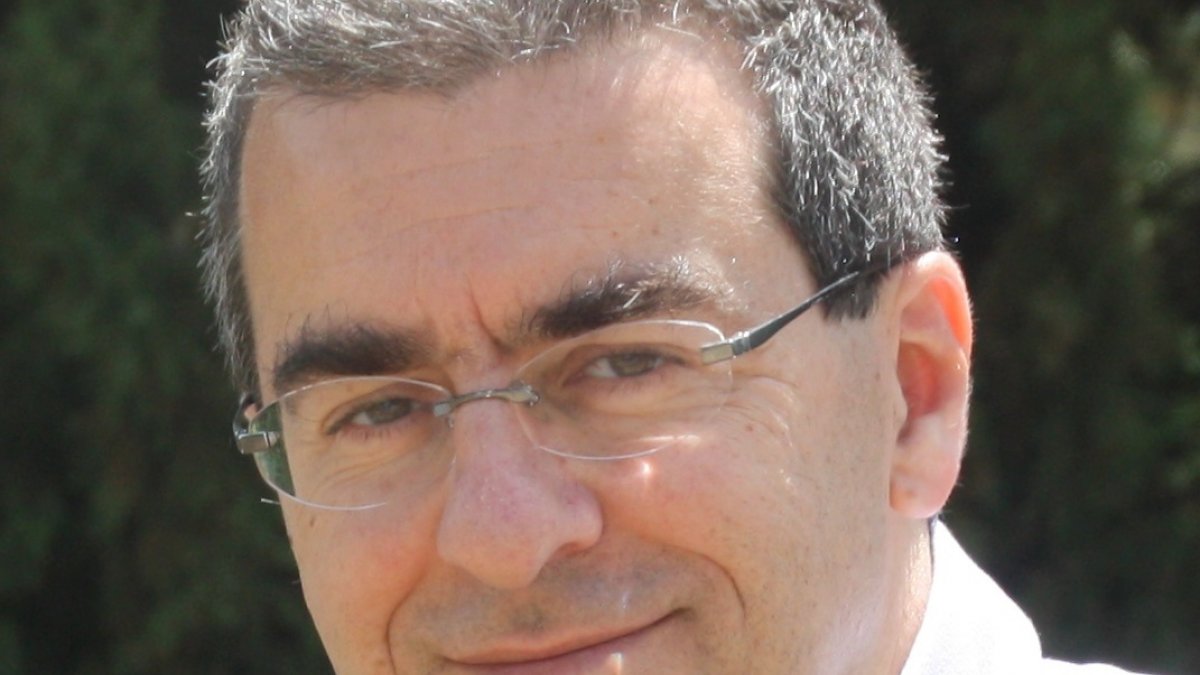 They’re structures that behave in a way that is influenced by their spatial geometry, which must therefore be taken into account in their design – such as a dome or a cable net.

Why do you think this discipline is so important?

My father was a structural engineer and I started to love structural engineering as a child. Then during my undergraduate studies in Athens, my home city, my thesis adviser was an early researcher of finite elements which had started being developed at that time. So my first approach to spatial structures was from the computational point of view.

I went to MIT and did my PhD on deployable structures – umbrella-like structures which open and close, and can be stored and transported easily. So that was a further step. Then on my return to Greece I became a faculty member at NTUA and was exposed more to constructional aspects of steel structures, such as detailing and the close relationship between design and constructability.

When did spatial structures first appear and how have they developed?

It depends how far back we want to go. I’d say that in Ancient Greece there were some of the first examples of spatial structures such as arches. Since masonry was used, with individual stones either in simple contact or connected through mortar, they needed to create shapes that would cause only compression, which is what led to arches. So this is a good example of the relationship between shape and function.

But if we want to look at the modern history of spatial structures, the MERO system, which enabled you to connect two steel bars together, was developed in Germany in the early 1940s, and this was a vital step towards the creation of space trusses and space frames.

Numerical computation was another important milestone because it enabled engineers to compute more quickly and easily other shapes and large spans – basically geometries that were out of the ordinary. Modern fabrication techniques obviously added a lot and, in recent years, digital developments have become very important for design, fabrication, and construction. 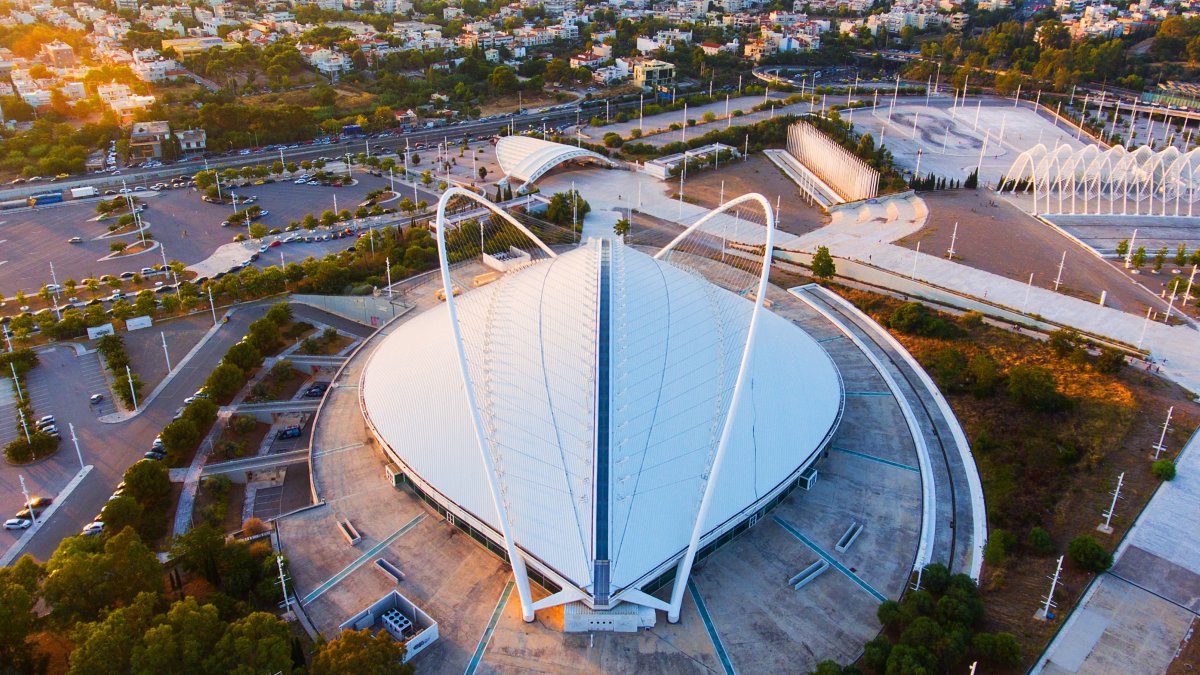 The Olympic Park in Athens.

Can you tell me about any notable spatial structure projects you’ve been involved in, or particularly admire?

Yes, we saw a big boost for spatial structures during the Athens 2004 Olympic Games. One of the main advantages of spatial structures is that they can cover large spans, so they’re very suitable for athletic facilities. Another advantage is that they are usually prefabricated, so they’re a good solution when you need to cover large spans quickly. The most famous example is the roof of the Olympic Stadium in Athens. I was a young engineer at the time and I had the chance to get involved in some of these structures, including the canopies of the entrances to the Olympic Complex.

Another structure I greatly admire is the Tokyo International Forum. The reason this impressed me so much is that it is exposed so that you can see the structure: the roof mimics the shape of the wooden frame of a ship or a fish skeleton supported on two huge columns, and the façade consists of a glass curtain wall hanging from the roof.

Digital development has been very, very significant for a number of reasons. Its first contribution was from a design point of view and started with the development of the finite element method around 1970. This technique was very specialised to begin with but is now accessible to all structural engineers. It allows them to make quick, reliable calculations of the forces and deformations that are expected to develop due to different loading conditions.

Another aspect of digital development is drawing software which enables us to translate the findings of the design calculations into information that can be used by the people who fabricate and construct spatial structures.

In recent years there’s been another advance in digital technology – in fabrication – and 3D printing is a classic example of this. Design optimisation has been around for many years but until recently the optimised shapes were very complex and, in many instances, it was not possible to fabricate these optimised results. But now with 3D printing, this is becoming possible.

The ‘Pioneers’ Award’ highlights pioneers in spatial structures and is presented at each Surrey conference. Which previous winners have stood out for you?

There are three who I’ve been personally involved with and who made a great impression on me. One is Massimo Majowiecki, an Italian professor and designer of some very well-known large span steel structures. I had the opportunity to cooperate with him around 10 years ago on the design of the roof for the stadium of Panathinaikos football club in Athens. Two others are both pioneers of deployable structures: the late Felix Escrig, a Spanish architect and engineer who is one of the few people to make deployable structures for real architectural applications, including a swimming pool in Seville; and Sergio Pellegrino who founded the Laboratory of Deployable Structures at the University of Cambridge and is now the President of IASS.

What do you anticipate will be the ‘hot topics’ at IASS 2020?

Well, traditional structural, architectural and engineering issues are at a very mature stage now, so what is dominating these conferences is the issues of digitalisation of the whole process, and of taking care of the environment as we build further structures. So I think these will be the main themes for next year’s conference.

The motto of IASS 2020 is ‘inspiring the next generation’. How do think those in the spatial structures field can best achieve this?

I think structural engineering has historically been lucky in attracting very gifted people and we must continue to do that. However it is becoming an old and mature field, and the younger generation naturally want to do modern, exciting stuff, so I think it’s important to demonstrate the relevance of spatial structures to society. Creativity is an inherent part of this profession, so this is a good argument for attracting gifted young people.

Another factor is that there are parts of the world where people’s basic housing needs are not met. By addressing these problems I think we will continue to make spatial structures an interesting field for younger people.