A new high-throughput method has revealed metals previously undetected in 3-D protein structures. The study, led by the Universities of Surrey and Oxford, is thought to have major implications for scientists using protein structure data. 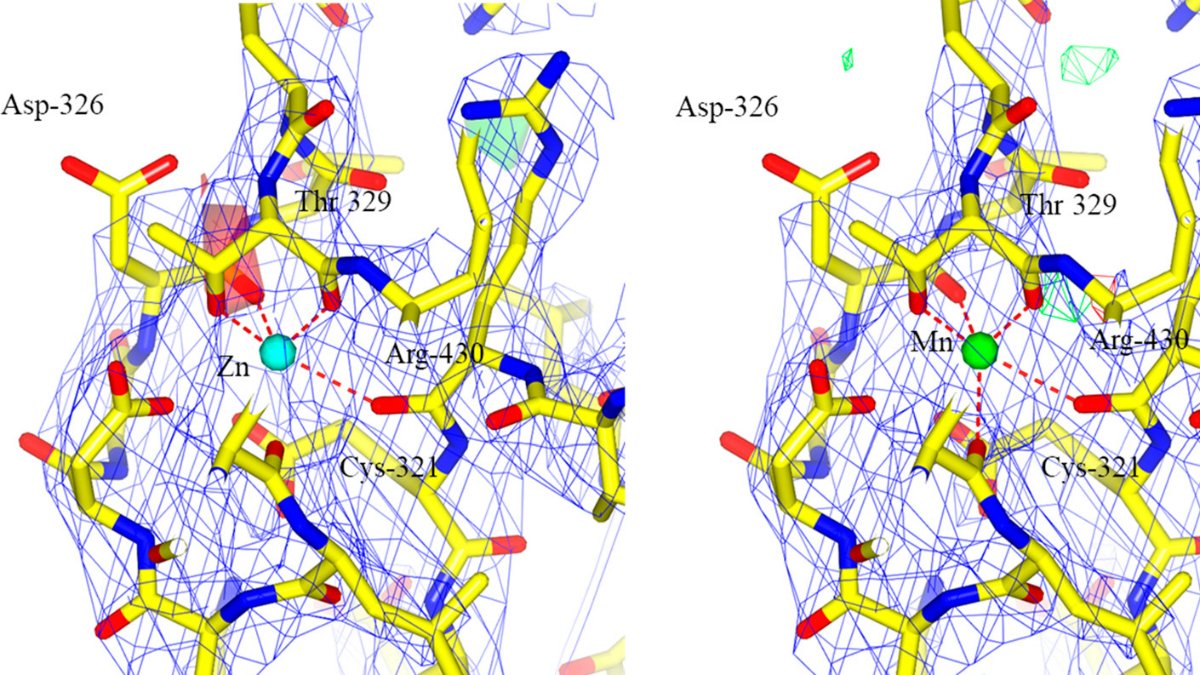 Proteins that contain metal, known as metalloproteins, play important roles in biology by regulating various pathways in the body that often become channels for life-saving drugs. While the amount of metal in such proteins is usually tiny, it is crucial to determining the function of these complex molecules; however, there hasn’t previously been a reliable analytical method for determining the identity and quantity of metal atoms in metalloproteins.

In a study published in the Journal of the American Chemical Society, an international multi-disciplinary team of researchers report that they have developed a way to unambiguously identify and count metal atoms in proteins in an efficient and routine way. Using this approach, they have revealed new, previously hidden information.

The method was developed by a University of Surrey physicist, Dr Geoffrey W. Grime, and a crystallographer from the University of Oxford, Elspeth F. Garman.  In a breakthrough described in the paper, the researchers have now automated the method to allow many samples to be analysed sequentially in a high-throughput ‘pipeline’.

The significance of the method was quickly realised by protein chemist Edward H. Snell of the Hauptmann Woodward Institute from the University of Buffalo in the US, who set up a study in which the team measured 30 randomly selected metalloproteins that are already in the global repository of protein structures called the Protein Data Bank (PDB).

The extraordinary results proved the immense importance of the new method: they showed that the techniques previously used to determine some of these 30 random protein structures had either misidentified the metal atoms or, in some cases, completely missed them.  In about half of the samples studied the metals built into the PDB models were incorrect.

The PDB is a critical resource for researchers worldwide. In 2017, there were on average 1.86 million downloads per day in the US alone. An enormous number of researchers use PDB structures without knowledge of the potential fundamental errors that may be present.   Extrapolating from the published results suggests that over 350,000 models downloaded per day may not contain the correct metal.   This has profound implications for those using the models, whose understanding of them may therefore be flawed.

Professor Elspeth Garman from the University of Oxford said: “I sat with my collaborator from the University of Buffalo and when we crunched the numbers, we both immediately realised we’d made a discovery that would – at best – result in a significant debate within our scientific community. We turned the numbers into a picture and hidden within the data was an explanation of how this molecular machine worked.”

Dr Geoffrey Grime from the University of Surrey said: “This is an outstanding example of interdisciplinary scientific collaboration where techniques developed initially in nuclear physics labs have made a big contribution to molecular biology.”

In addition to Snell, Garman and Grime, other co-authors on the paper are Oliver B. Zeldin and Edward D. Lowe of Oxford University; Mary E. Snell of HWI; John F. Hunt and Liang Tong of Columbia University; and Gaetano T. Montelione of Rensselaer Polytechnic Institute.

The Surrey Ion Beam Centre is supported by the Engineering and Physical Sciences Research Council and the European Commission project, RADIATE.