David Frohlich, Professor of Interaction Design and Director of Digital World Research Centre in the Department of Music & Media 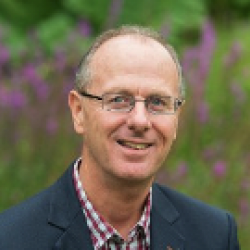 David works at the intersection of social science, design and invention relating to the future of personal media.  He has had a longstanding interest in combining sounds and images through ‘audiophotography’ and digital storytelling, and in printing images with related sounds.  Recently these ideas have branched into two strands of research and innovation on augmented paper and sentimental sounds with commercial partners.

During a project on Interactive Newsprint exploring talking newspapers, David and Radu Sporea in the Advanced Technology Institute invented a technology called Light Tags for automatically signalling which page is open in a book. They used this to create a audiophotobook whose pages magically played a soundscape in the room when they were turned.  This became a stimulus for the £1.17m Next Generation Paper project with Radu and other colleagues from Surrey, including professors Mirek Bober, Caroline Scarles and Alan Brown, together with George Revill at the Open University.  The project has created a new platform for augmented books with printed hotlinks that play on a nearby smartphone, and tested it out in augmented travel guides and photobooks which enhance travel experiences. The team have just been awarded £203,000 in a covid-related extension to the project for 2021. This is to build iPhone versions of the Android NGP apps, and create demonstration ‘a-books’ with four companies for market testing and potential future commercialisation.

David has also been working with Mark Plumbley in CVSSP on the £1.59m Making Sense of Sounds project where he co-designed the Sentimental Audio Memories system. This comprises a custom dictaphone for recording 10 second sound clips and a novel playback device which automatically classifies sounds using machine learning algorithms from the project. Users can browse thousands of sound clips forwards and backwards in time using a large control knob, and filter them using buttons for Voice, Music, Nature and Manmade sounds on the front of the device. This audio-memory system is currently being trialled by young families with children, and the approach considered as a new kind of domestic reminiscing activity for people with dementia and their carers. In the latter case, Sarah Cambell has been creating custom soundscapes for particular memories and observing their effect on emotion and conversation when they are played back. Here commercial partners are interested in extending their support for music therapy to sound recordings.