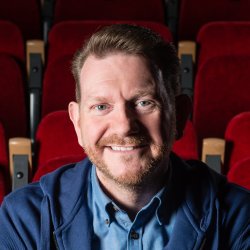 Andrew Davidson is an Australian theatre practitioner and musician. He is a Teaching Fellow in Acting & Musical Theatre at Guildford School of Acting (GSA), University of Surrey, and is also GSA’s Wellbeing Champion. Andrew is a graduate of Australia’s National Institute of Dramatic Art (NIDA). He has directed plays, opera, musicals, and cabaret. Andrew studied composition at the University of Sydney and has written scores for drama, musical theatre, and dance. As Head of Dramatic Arts at the Australian Institute of Music (AIM), Andrew established the Bachelor of Performance degree. As a music educator, he is a qualified teacher of Dalcroze Eurhythmics and Kodály Musicianship. As a freelance musician, Andrew plays piano for ballet and contemporary dance. As a researcher, he has presented at conferences and workshops internationally.