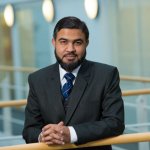 Dr. Mohammad Asim is a Molecular Biologist who studies Cancer. he has over 15 years of experience studying the molecular mechanisms that lead to prostate cancer progression and failure of current therapies.

His research has focussed on understanding the role of AR in PCa and is potentially vital in finding novel treatment for aggressive PCa.Mohammad graduated with a PhD from the Justus Liebig University in Germany for his work uncovering the role of signal transduction pathways and transcriptional corepressors in the regulation of Androgen Receptor (AR) signalling in prostate cancer (PCa).

Following a two-year postdoc in Cancer Biology at the University of Wisconsin, Madison, USA where he discovered novel anti-androgens, he took up a Senior Scientist position at the Cancer Research UK Cambridge Institute at the University of Cambridge, UK. Here, Mohammad performed some ground-breaking work, identifying the first kinase that can act as a chaperone for AR and is a drug target.

At Surrey, his work uncovered a novel synthetic lethal relationship between AR and PARP which is being clinically exploited to treat castration-resistant prostate cancer (CRPC). His lab identified PDZ binding Kinase as a mediator of AR function in CRPC thus revealing the molecular mechanism underlying the failure of hormone therapy of PCa. This work contributed to understanding pathways that can cause the failure of hormone/radiation therapy and can thus be exploited in developing combination approaches for effective cancer treatment.

For his discoveries on a novel dual activity anti-androgenic drug which is currently in development, Dr. Asim was awarded a Young Investigator Award from the Prostate Cancer Foundation. In addition to his role at Surrey, Dr. Asim concurrently holds visiting scientist posts at the Universities of Oxford and Cambridge.