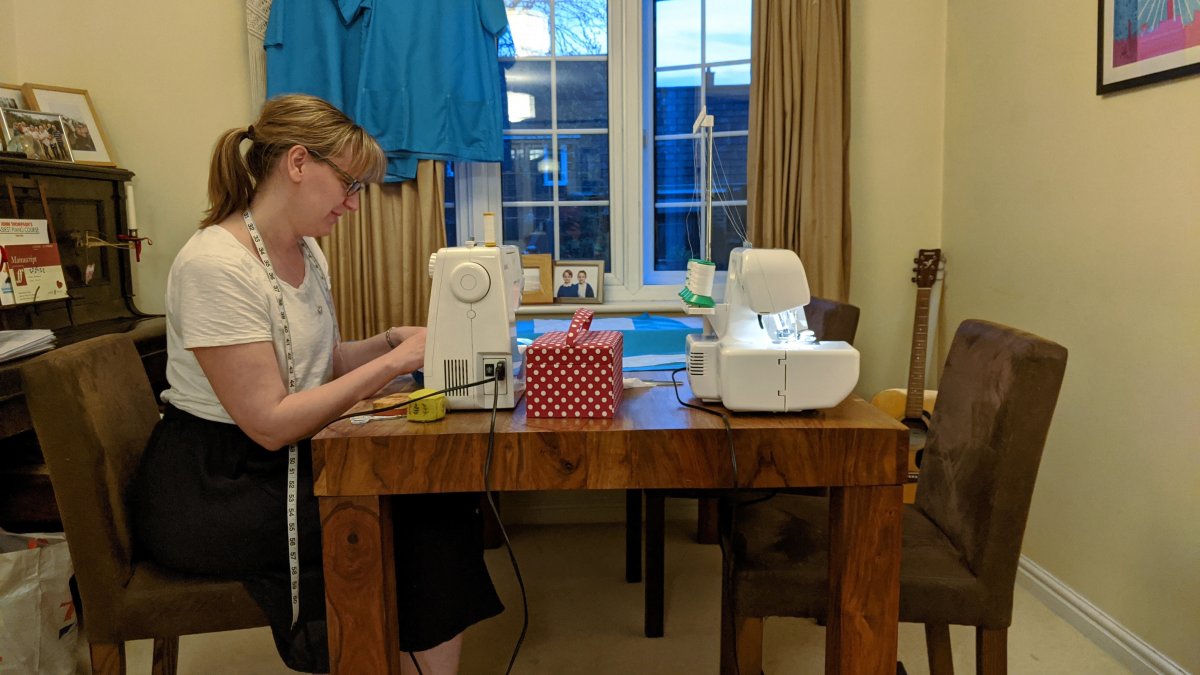 Katy’s story started when she became aware of a Facebook community group called Scrubs Glorious Scrubs. The group is hosted by local seamstress Lynda Yong, who has initiated volunteer efforts out of her workshop in Ascot and, with the support of events organiser Sunita Shroff, the group has grown to over 200 hundred volunteers sewing scrubs, hats and laundry bags.

Inspired by this, Katy reached out to a Fleet based craft group on Facebook, and with a group of twelve others, co-coordinated the distribution of fabric and materials from Yong’s workshop in Ascot. Between them they shared the collection and drop off duties. These volunteer efforts have shown an incredible sense of community and comradery between strangers and Katy commented: “It’s been great to have such a supportive group of strangers with a common purpose, even though we’ve never met. We’ll have to meet for a coffee when it’s all over.”

Alongside working from home and caring for two young children, Katy has given some of her time over the Easter break and evenings to sew, she said: “I wanted to do something to help and given that I sort of know my way around a sewing machine, I thought I’d have a go. My family have been very patient with me turning the table into a sewing workshop.

“It has often been at the back of my mind that a lot of those working so hard and risking their own health at Frimley are former Surrey students and staff. Being at home it can feel like you’re powerless to do anything to help, but this is something I’ve been able to do in my own time and apart from the odd frustration when it goes wrong, I’ve enjoyed it. I’ll certainly have a go at making something other than scrubs to wear in the future.”

Being unable to stick to the traditional scrub colours, the material available has resulted staff and doctors at Frimley wearing wacky, colourful non-surgical uniforms, which is reportedly a great morale booster for patients.