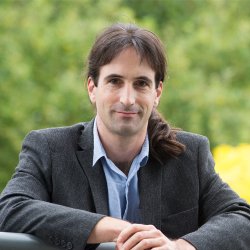 Dr Abásolo started his research career working on the development of non-linear techniques for the analysis of brain activity recorded in EEGs for the diagnosis of Alzheimer's disease. He has subsequently applied this work to the characterisation of other biomedical signals (such as intracranial pressure, oxygen saturation and electrocardiogram recordings, among others) with many different advanced signal processing algorithms. His work has led to the publication of several highly cited papers in indexed journals (h-index of 24 based on Thomson Reuters, February 2018, or 26 based on Google Scholar, February 2018) and he has also been instrumental in securing research grants throughout his academic career.

Currently, Dr Abásolo's research interests lie mainly in non-linear biomedical signal processing, in particular the development of algorithms that can be applied to Alzheimer's disease diagnosis, the characterisation of healthy and pathological ageing using brain signals, EEG analysis in sleep studies, and electrocardiogram analysis in atrial fibrillation. He is also interested in deep learning techniques for EEG analysis and the identification of circadian and ultradian rhythms with advanced signal processing algorithms.

Dr Daniel Abásolo is a passionate advocate for biomedical engineering and has been championing the discipline both at the University of Surrey, for example as a member of the Engineering for Health project, and nationally, as an active member of the IET Healthcare Technologies Network Executive Committee. He is currently the Chairman of this committee and also represents the IET at the IMechE Biomedical Engineering Division.

He is also particularly enthusiastic about nurturing students' talent with research-intensive final year projects. This has led to significant success for the University of Surrey nationally, with medical/biomedical engineering students working under his supervision winning the IET Dennis Hill Award for best MEng/MSc project for four consecutive years and other IMechE Medical Engineering student awards also going to students from the University of Surrey. 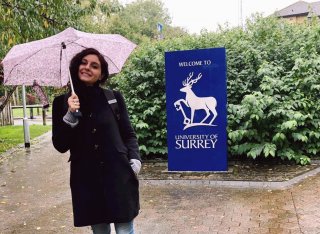 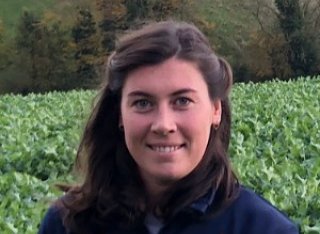 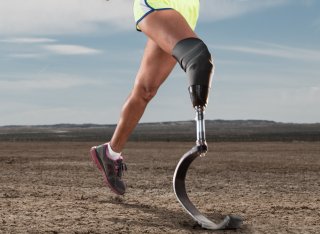 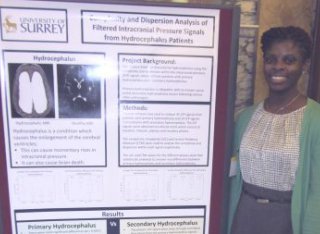 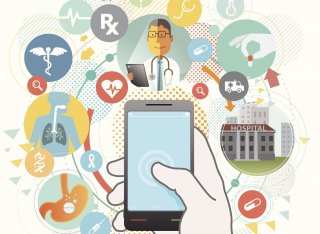 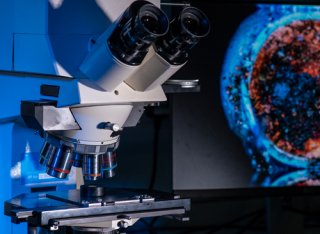 Vadim Alexeenko, Philippa J Howlett, James A Fraser, Daniel Abasolo, Thang S Han, David S Fluck, Christopher H Fry, Rita I Jabr (2021)Prediction of Paroxysmal Atrial Fibrillation From Complexity Analysis of the Sinus Rhythm ECG: A Retrospective Case/Control Pilot Study, In: Frontiers in physiology12pp. 570705-570705 Frontiers Media S.A
DOI: 10.3389/fphys.2021.570705
Paroxysmal atrial fibrillation (PAF) is the most common cardiac arrhythmia, conveying a stroke risk comparable to persistent AF. It poses a significant diagnostic challenge given its intermittency and potential brevity, and absence of symptoms in most patients. This pilot study introduces a novel biomarker for early PAF detection, based upon analysis of sinus rhythm ECG waveform complexity. Sinus rhythm ECG recordings were made from 52 patients with ( n = 28) or without ( n = 24) a subsequent diagnosis of PAF. Subjects used a handheld ECG monitor to record 28-second periods, twice-daily for at least 3 weeks. Two independent ECG complexity indices were calculated using a Lempel-Ziv algorithm: R-wave interval variability (beat detection, BD) and complexity of the entire ECG waveform (threshold crossing, TC). TC, but not BD, complexity scores were significantly greater in PAF patients, but TC complexity alone did not identify satisfactorily individual PAF cases. However, a composite complexity score ( h -score) based on within-patient BD and TC variability scores was devised. The h -score allowed correct identification of PAF patients with 85% sensitivity and 83% specificity. This powerful but simple approach to identify PAF sufferers from analysis of brief periods of sinus-rhythm ECGs using hand-held monitors should enable easy and low-cost screening for PAF with the potential to reduce stroke occurrence.
Samantha M. Simons (2017)Analysis of brain signals with advanced signal processing techniques to help in the diagnosis of Alzheimer's disease.
Alzheimer’s disease (AD) is the most prevalent form of dementia in the world. Symptoms include progressive memory, cognitive and behavioural changes before death, caused by amyloid plaques and hyperphosphorated tau in the brain. The cause of AD is currently unknown and current interventions only slow the decline. Diagnosis is based on patient and familial history, interviews with close family and friends, cognitive, mental and physical tests. The electroencephalogram (EEG) records the electrical signals of the brain, which AD, as a cortical dementia, is known to directly affect. Non-linear signal processing has shown that these changes in the EEG can be identified with complementary findings to linear methods. This thesis aimed to explore these changes with novel univariate and bivariate methods using both synthetic signals and resting, eyes-closed EEGs recorded from 22 subjects, 11 AD patients (MMSE=13.1±5.9 (mean SD)) and 11 age-matched controls (30±0). Permutation entropy showed statistically significant increased complexity in control EEGs for electrodes at the front of the head. Bivariate analysis was novel for this EEG database so coherence was used to create a comparison results set. With the success of Lempel-Ziv Complexity (LZC), distance based bivariate forms were applied (dLZC03). Novel normalisation methods based on that for univariate LZC showed a greater representation of the signal patterns in the results. Volume conduction was shown to significantly impact the results, both of coherence and dLZC03, though this was greater with coherence. Lastly, volume conduction mitigated, bandwidth based pre filtering with dLZC03 was calculated, producing the most significant p values ever recorded with this EEG database. Thus this PhD shows increased distinction between the two subject groups with dLZC03 over LZC and increased distinction with limited but targeted bandwidths from those subject signals.
Elizabeth Shumbayawonda (2020)An investigation with advanced signal processing techniques of the effects of ageing on brain activity recorded in magnetoencephalograms. University of Surrey
DOI: 10.15126/thesis.00851749

The brain is a very delicate, but sophisticated and complex organ of the body. During life, the brain grows and develops, matures, and then ages like all other organs of the body. This maturation and ageing comes with various physiological and anatomical changes which have an impact on the background activity of the brain. Brain activity can be recorded using various techniques including magnetoencephalography and magnetic resonance imaging, and these recordings combined with signal processing can be useful to characterise the changes in the brain that can be a result of the ageing process. By analysing various aspects of the brain, such as functional and effective connectivity, entropy and complexity, the state of the resting brain at different ages can be understood with greater detail. Furthermore, these analyses can be used to investigate the resting state brain networks that are present in the brain, as well as their topology. This information can be combined with network analysis techniques such as graph theory and used to understand the manner in which the brain both matures and ages.

This research made use of two magnetoencephalogram (MEG) databases recorded from both males and females. The first, containing resting state MEGs (rMEGs) from 220 healthy volunteers (aged 7-84), was used as the main database in this thesis to investigate the effects of age on rMEG signals throughout life. The aim of this research was to make use of rMEG signals and signal processing techniques to determine the effects of healthy ageing on the brain throughout life. It was hypothesised that the effects of age are identifiable using advanced signal processing techniques. Thus, the effects of age on linear interactions, causality, synchronisation, information flow, entropy and complexity, were investigated in the 148 MEG channels lying over 5 brain regions (anterior, central, left lateral, posterior, and, right lateral) using multiple linear and non-linear analysis techniques (namely: Pearson’s correlation, coherence, Granger causality, phase slope index, rho index, transfer entropy, synchronisation likelihood, Lempel-Ziv complexity, permutation Lempel-Ziv complexity, permutation entropy, and, modified permutation entropy). Additionally, graph theory principles were used to evaluate different network components such as integration (global efficiency), segregation (clustering coefficient and modularity), centrality (betweenness), and resilience (strength and assortativity) so as to obtain an understanding of the construct of the resting brain network. Moreover, complex network analysis was also used to determine the overall network topology of the brain network and how this changed at different stages in life. Gender effects were also studied so as to identify if there were any significant differences between males and females at different stages of life. Results from these analyses showed that the healthy resting brain has low effective and functional connectivity, relatively low complexity and entropy, as well as no significant detectable direction of information flow. Therefore this showed that there is very little synchronous or simultaneously occurring information in the rMEG time series. Thus, during rest, the brain resembles a system in limbo/phase transition, with low effective and functional connectivity, relatively low complexity and entropy, and no significant detectable direction of information flow.

All in all, taking the novel findings from this thesis into account, this research project managed to highlight the effects of age, gender and cognitive decline on rMEG signals, and thus an extension to the description of what can be termed an ‘illustration of a physiological rhythm’ showing the evolution of different attributes of the healthy brain activity throughout life was presented. Moreover, in the long term, these results can be used to form a benchmark for healthy ageing which could be used to generate a fingerprint for healthy ageing. This fingerprint can then be used as part of the process of diagnosing pathology, or as a step towards pre-diagnosis of brain pathology.

To analyse magnetoencephalogram (MEG) signals with Lempel-Ziv Complexity (LZC) to identify the regions of the brain showing changes related to cognitive decline and Alzheimeŕs Disease (AD).

Brain complexity – measured with LZC – decreases in MCI patients when compared to SCD and healthy controls. This decrease is associated with a decrease in hippocampal volume, a key feature in AD progression.

This is the first study to date characterising the changes of brain activity complexity showing the specific spatial pattern of the alterations as well as the morphological correlations throughout preclinical stages of AD.

We propose a novel complexity measure to overcome the deficiencies of the widespread and powerful multiscale entropy (MSE), including, MSE values may be undefined for short signals, and MSE is slow for real-time applications.

We introduce multiscale dispersion entropy (DisEn - MDE) as a very fast and powerful method to quantify the complexity of signals. MDE is based on our recently developed DisEn, which has a computation cost of O(N), compared with O(N2) for sample entropy used in MSE. We also propose the refined composite MDE (RCMDE) to improve the stability of MDE.

We evaluate MDE, RCMDE, and refined composite MSE (RCMSE) on synthetic signals and three biomedical datasets. The MDE, RCMDE, and RCMSE methods show similar results, although the MDE and RCMDE are faster, lead to more stable results, and discriminate different types of physiological signals better than MSE and RCMSE.