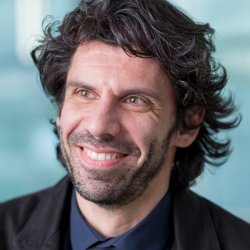 Department of Electrical and Electronic Engineering.

I received my PhD degree in 2005 from the National and Kapodistrian University of Athens where I was a member of the Wireless Systems Group. Since then, I have held research positions at the Institute for Communication Technologies and Embedded Systems at RWTH Aachen University, at the California Institute for Telecommunications and Information Technology at University of California at Irvine and at the Computer Science Department at University College London (UCL). In October 2013 I joined the Faculty of Engineering and Physical Sciences (FEPS) at the University of Surrey as a Lecturer (Assistant Professor), where I'm actively involved with research in the 5G Innovation Centre.

I have also been a consultant for the Hellenic General Secretariat for Research and Technology, where I also served as a National Delegate of Greece to the Joint Board on Communication Satellite Programmes of European Space Agency.

I'm also a recipient of the prestigious First Grant of the UK's Engineering and Physical Sciences Research Council.

My scholarly contributions and academic indexes can be found here.