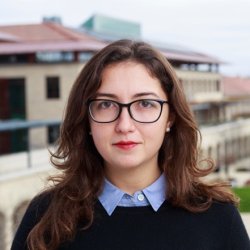 Dr. Melis Duyar is Lecturer of Chemical and Process Engineering at the University of Surrey. She has a research background in heterogeneous catalysis for energy and environmental applications. Dr. Duyar received her B.Sc. (2012) in Chemical and Biological Engineering from Koç University in Istanbul, Turkey. She obtained her M.S. (2013) and Ph.D. (2015) in Earth and Environmental Engineering from Columbia University in the City of New York and conducted post-doctoral research (2015-2017) in the Chemical Engineering Department at Stanford University. Prior to her academic appointment at the University of Surrey, Dr. Duyar worked at the US Department of Energy’s SLAC National Accelerator Laboratory as Associate Staff Scientist in the SUNCAT Center for Interface Science and Catalysis and was also Lecturer of Chemical Engineering at Stanford University for 2 years (2017-2019).

Dr. Duyar’s research interests focus on the development of novel adsorbent materials for carbon dioxide capture and catalytic materials for the production of sustainable fuels and chemicals from carbon based feedstocks. Her research aims to establish rational design criteria for catalytically active materials for the following applications: